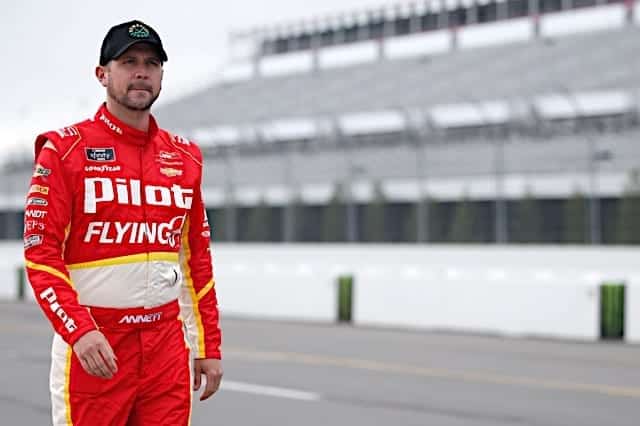 The JR Motorsports team is loaded with experience in the XFINITY Series, with drivers Elliott Sadler, Justin Allgaier and Michael Annett, all of whom have raced full-time in the Cup Series. However, 12 races into 2018, two of them have performed up to expectations, and one, self-admittedly has not.

Annett, 31, returned to JRM this season after finishing ninth in the championship standings last season. So far this year, he has yet to crack the top 10 and is sitting 15th in points and 14th on the playoff grid.

“We know we can run a lot better,” Annett told Frontstretch of his 2018 season. “Our teammates are up there in the top five in points, consistently leading laps. I give us a C+ at best right now, but [there is] a lot of time left. I’ve had a season where I’ve struggled and then all of a sudden you hit your stride and it seems like everything comes easy to you.”

The core group of team members returned to the No. 5 car this season, with Jason Stockert in his second season as Annett’s crew chief. Though the first three months of the season haven’t gone the way the team would have hoped, Annett mentions that one of the strengths of the team has been “having fun.”

Despite having fun, Annett has led just five circuits this season. His teammates have combined to lead 420 laps with Allgaier leading the series with 276 laps led. Both the Nos. 7 and 9 teams have visited Victory Lane, while Sadler is leading the points by more than a full race and has finished inside the top 10 in all 12 races this season.

“It’s encouraging and frustrating,” Annett said of watching his teammates succeed. “We wanted to start at Daytona right where they [teammates] ended up. We’re still playing catch up. We have our work to do, but JR Motorsports has a big notebook that we can go to and that’s what we’ve been doing more and more of, and we’re definitely starting to see improvements.”

Annett was involved in two incidents this past weekend at Pocono Raceway (June 2) before calling it a day. Coming into the race, he was on a string of four consecutive top-20 finishes, and nine of the past 10 races inside the top 20. His best finish of 2018 came at Charlotte Motor Speedway in 12th, while having a shot at the top 10 before the green-white-checkered finish.

What’s more baffling to Annett is he knows he has the same resources and tools as his trio of teammates that are in the top six in the championship but he sits 15th in points, 22 markers behind Ross Chastain, who currently holds the final playoff spot.

“When you know you’re in the same equipment as a teammate who won a race a couple weeks ago at Dover [Allgaier], you know you have the same resources, same equipment, same engines, it is frustrating. As long as you keep seeing improvements, you’re still frustrated, but also encouraged. If you stall out or start to go the other way, that’s when you start to really get frustrated.

“It’s not hard for our team to keep their heads up. They enjoy being here and want this car to go fast. Every time they put a hand on that car their goal is to make our team better, so that’s pretty cool to be a part of.”

Annett has zero top 10s this season. But the fact the team is just two spots out of a playoff position is an accomplishment in itself, minimizing the damage thus far. He was in a similar position at this point last season, though sitting two spots above the cut-line.

“We’re underperforming right now by a lot and we’re just outside of the playoffs,” he said. “We just need to speed that momentum process up and get in the top 10 consistently, then it will be fairly easy to get ourselves into the playoffs.

“There are more competitive cars this year than last year, so it’s not going to be as easy as last year because we really underperformed last year. We have to run better, we can’t rest on our laurels and we have to get going.”

Over the past few seasons, Annett has seen the highest of highs in the sport and is currently facing one of the lows, even if he’s racing for arguably the best company in the XFINITY Series.

In 2014, Annett ran full-time for Tommy Baldwin Racing in the Cup Series. In 2015 and 2016, he raced with HScott Motorsports, where he earned a best finish of 13th at Daytona in 70 races with the organization. Last year, he watched former teammate William Byron win the championship in his rookie season while the No. 5 team had just one top-five finish the entire season.

So, where is Annett’s head going forward?

“It’s definitely taken a hit, that’s for sure, he says of his confidence level. “All it takes is one really good run and you remember that you know how to do this. When you do struggle for a while and you underperform, it definitely takes a hit. In our sport, luckily, you’re only as good as your last race, so if you don’t have a good weekend you have six days until you can come back and redeem yourself. I’m just waiting for that one race.”