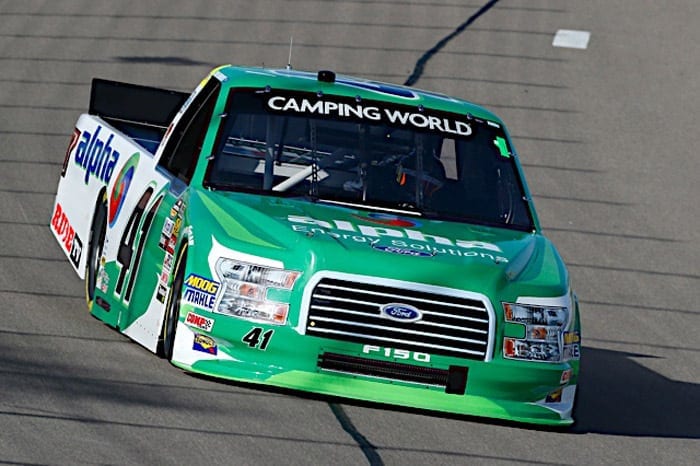 The Camping World Truck Series returns to the track this Friday night at Texas Motor Speedway (June 8). In its most recent outing, the series descended on Charlotte Motor Speedway during the Monster Energy NASCAR Cup Series’ All-Star Race weekend and Johnny Sauter left with a third win to his credit in just seven races this season.

Well on his way to a run in the playoffs, the driver of the No. 21 Chevrolet, who has four wins at the mile-and-a-half oval, will look to spoil the hopes of those who have yet to visit Victory Lane this season. After all, Sauter is just one of three series regulars with wins already this year, joining Brett Moffitt and Noah Gragson. But there are plenty of others who would like to solidify their spot in the playoffs with nine races remaining before the cutoff.

Two-time series champion Matt Crafton is definitely one of them. Sitting sixth in the standings, 92 points out of the lead, the driver of the No. 88 Ford has just three top-fives in seven races this season, and his average finish is currently three full positions lower than it was last year. With just a 44-point cushion over ninth-place Dalton Sargeant, Crafton could use a win to help solidify his spot in the championship battle.

The good news for Crafton, however, is that he’s got some solid numbers at Texas. The driver with the most starts at the mile-and-a-half track, by far, at 34, boasts 23 top 10s in that timeframe. Perhaps, more importantly, he’s also accumulated two wins and 429 laps led and hasn’t finished outside the top 10 at the track since this race in 2011. Last season, he posted a pair of ninth-place finishes in the Lone Star State.

“Before the repave, there was plenty of room to pass at Texas (Motor Speedway). We could run wide-open – run the top or the bottom,” Crafton said in a team preview. “When we were there in the fall last year, it was impossible to pass. Now that the track has aged a little, it will be interesting to see what we will have to work with this weekend.

“Either way, I love going to Texas, and we’ve seen some success there. I think it’s a great track for us to finally get back into Victory Lane.”

Meanwhile, teammate Ben Rhodes has far fewer starts at TMS at just four and has a single top-five finish. He does, however, sit in a better spot than his teammate at this point in the year. With three top fives and five top 10s in seven races, he sits a comfortable fourth in the standings and nearly 60 points to the good over ninth. But he still doesn’t have a win that will make it easier for his team to sit back and feel more confident about its home inside the playoff field.

ThorSport is far from the only organization that’s looking to get its drivers into Victory Lane. Aside from Sauter, GMS Racing has a trio of drivers in Cody Coughlin, Justin Haley and Dalton Sargeant who would like to follow in their veteran teammate’s footsteps. None of the three has won in the series to date.

Haley scored a runner-up finish at Daytona International Speedway in the season-opener and boasts a third-place result at Dover a few races ago. He sits eighth in the standings and holds onto the final cutoff spot for the playoffs. Meanwhile, Sargeant, who’s ninth in points, has just a pair of top 10s, though his average finish is better than Haley’s.

Coughlin, however, may be the most surprising of the trio. After all, he’s already matched the number of top 10s he scored all of last season with ThorSport Racing at three. His consistently lacks a bit compared to his teammates. In all four events Coughlin didn’t score a top 10, he’s ended up outside the top 15, putting him 11th in the standings, nearly 40 points below the cutoff line.

The good news for all of these drivers, though, is that since Friday night’s PPG 400 is a standalone race with the XFINITY and Monster Energy NASCAR Cup series at Michigan International Speedway, it’s their chance to shine.