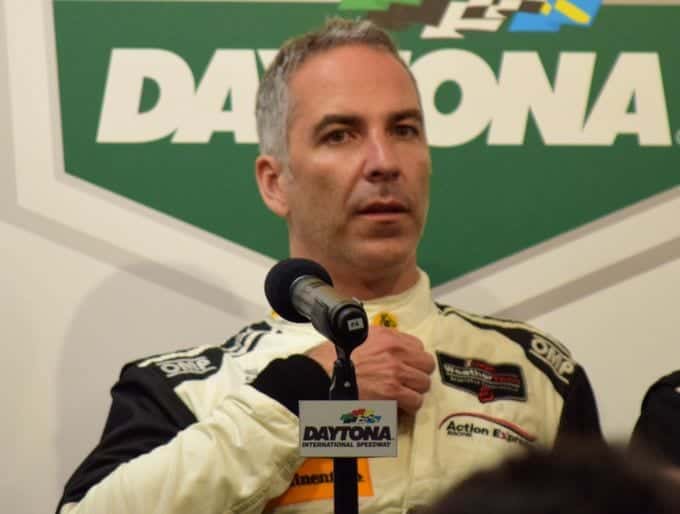 Action Express Racing announced on Thursday (June 7) that Jõao Barbosa, co-driver of the No. 5 Mustang Sampling-sponsored Cadillac DPi-V.R., has been involved in a bicycle crash while training.  In the crash, Barbosa suffered a wrist injury in the crash that will keep him out for at least the next two races on the IMSA WeatherTech SportsCar Championship schedule.

Naturally, Barbosa is saddened by the injury.

“I am really disappointed to have this accident and I hate to miss these races, especially with the amount of success we’ve had at Watkins Glen, I love that track,” Barbosa said in a press release.  “I was on a group ride on my road bike, and some of the people ahead of me stopped before I was expecting them to, so I fell on my hand and hurt my wrist.  It is really unfortunate but I am already focused on my program to get back in the car when the doctors let me.”

Barbosa has every reason to be disappointed that he won’t get to race at Watkins Glen.  The 43-year old Barbosa is a four-time winner of the Sahlen’s Six Hours at the Glen, including the last two years.  In addition, the injury ends any realistic chance at claiming a second IMSA WeatherTech SportsCar Championship Prototype title.  Barbosa and teammate Filipe Albuquerque are currently tied for the points lead with Eric Curran and Felipe Nasr in Action Express Racing’s No. 31 Cadillac.

Action Express Racing won’t have to look far to find a sub.  Christian Fittipaldi, who serves as Action Express Racing’s Sporting Director, will substitute for Barbosa at Canadian Tire Motorsports Park.  For the Sahlen’s Six Hours at the Glen, Fittipaldi was already scheduled to drive alongside Barbosa and Albuquerque.  The team will likely go with a two-driver lineup for the six-hour classic.

As of now, the plan is for Barbosa to return to the No. 5 Cadillac DPi-V.R. in the Continental Tire Road Race Showcase at Road America on Aug. 5.  Howeer, those plans could change depending on how well his recovery goes.