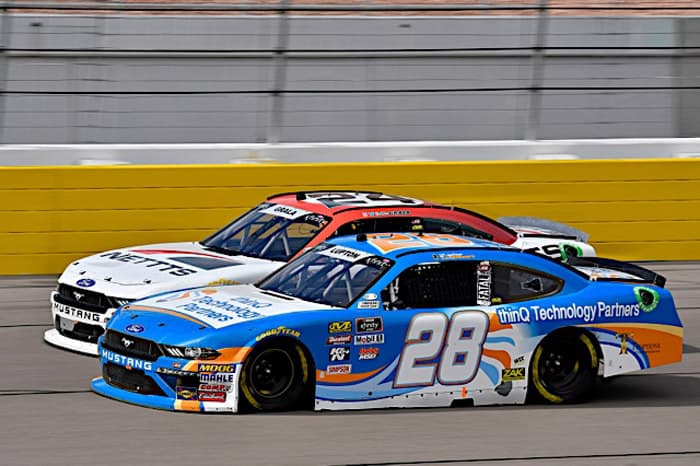 Dylan Lupton, driver of the No. 28 Ford Mustang for JGL Racing, will not be running in the NASCAR XFINITY Series LTi Printing 250 Saturday (June 9), according to a press release sent late Thursday afternoon (June 7).

“Due to unfortunate circumstances, I will not be competing in this weekend’s XFINITY Series race at Michigan International Speedway,” Lupton stated.

JGL Racing has not commented on Lupton’s exit, though the No. 28 has withdrawn from the event, meaning that the remaining 40 cars will be locked in to take the green flag.

In fact, Lupton will not be returning to JGL Racing at all: “I appreciate the opportunity I had to drive for [team owner] James Whitener, and I wish him and JGL Racing the best in their future endeavors.”

Less than a month ago JGL abruptly shut down Kaz Grala’s No. 24 team, though with help from Whitener, Grala quickly found a new team.

Whitener is suffering from liver failure and is on a transplant list, according to NBC Sports.

“I’m re-focusing my efforts to secure a competitive ride in the NASCAR XFINITY Series and look forward to announcing my plans for the rest of the 2018 season when appropriate,” said Lupton. “I’d like to thank all of my marketing partners, family, friends and the fans for their continued support.”

Lupton has 35 starts in the XFINITY Series, with a season-high finish of 17th at Texas Motor Speedway and a career-best finish of ninth at Michigan for Athenian Motorsports in 2015. He also has four starts in the Monster Energy NASCAR Cup Series, all in 2016.

Lupton is currently 30th in the NXS point standings after driving in 11 events in the No. 28. The car is in 23rd place in the NXS owner standings.