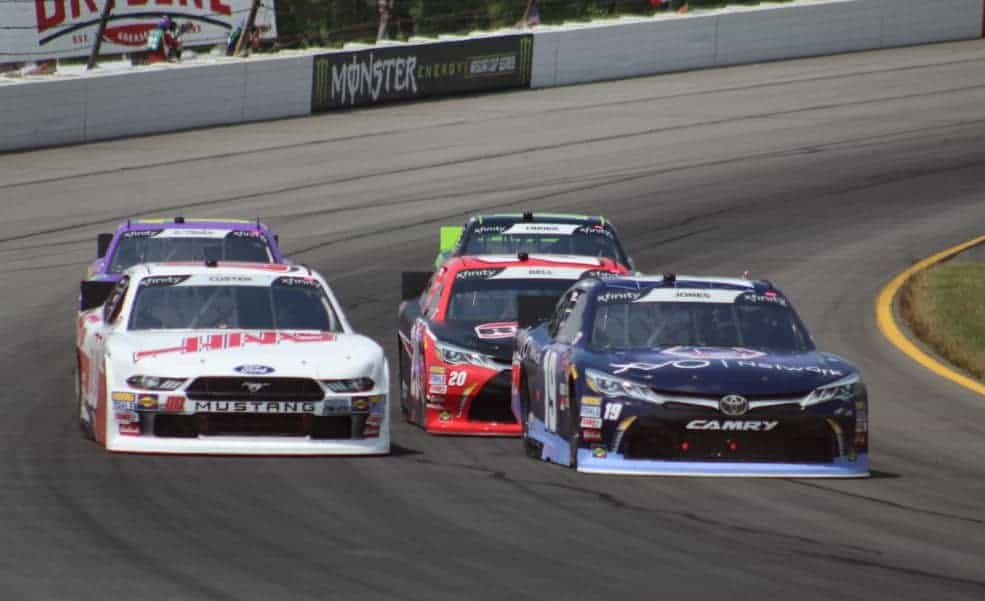 1. Kyle Busch won the NASCAR XFINITY Series race at Pocono Raceway, but his car was deemed too high in post-race inspection. Should the fact that a violation was technically a disadvantage matter when penalties are issued?

Vito Pugliese: Height violations and fines have been a story line since over 25 years, and as with a speeding ticket, intent is irrelevant; you’re either within the tolerance or you are not. Besides, who’s to say that having the nose a little high isn’t an advantage? Was the intent to change the attitude of the car to get that giant parachute of a spoiler our of the air? When it comes to inspections and aerodynamics at plate tracks, perceived intent is a fool’s errand. Unless they’re going to bring a portable wind tunnel to each track for post-race tech, the fines are fine as is.

Matt McLaughlin:  Back up the bus, Gus. With a brand new aerodynamic package and the restrictor plates, who’s to say that the increased ride hide wasn’t, in fact, an advantage? I’m not an aerodynamicist, but these teams are pretty sharp about quickly finding advantages no matter what rules package NASCAR throws at them. They also knew what the rules were heading into the event and somehow the other cars complied with those rules.  Methinks something is rotten in the state of Denmark, and it’s not Abba this time.

John Haverlin: I don’t understand why NASCAR has a rule to prevent disadvantages such as the car being too high. But since it does, rules are the rules, and they must be followed. So yes, the No. 18 car needed to be penalized because NASCAR must follow through on its post-race inspection policies. It’s a bad look if it doesn’t.

Amy Henderson: Pocono was the second race in a row where a Joe Gibbs Racing car failed post-race heights (Christopher Bell‘s car failed at Charlotte Motor Speedway), so perhaps it’s not the disadvantage it appears to be.  As for penalties, NASCAR needs to start taking wins from cars that fail post-race inspection. It’s long overdue. The only thing that should be taken into consideration in that regard is if something broke to cause that failure, and the team can prove it broke. Otherwise, take back the trophy and give it to the next driver whose car is legal.

Wesley Coburn: Since it was a disadvantage, it feels like NASCAR should take that into account, but for the sale of consistency, it did the right thing.

2. NASCAR admitted the rules package in place for the XFINITY race on Saturday didn’t go as well as it had hoped. Is the constant tinkering with aero setups a positive thing, or should it focus on finding other ways to improve the racing?

Bryan Davis Keith: Michigan International Speedway will likely be a better test of whether the aero tinkering is moving in the right direction, as it’s more representative of what NASCAR races regularly. Reality is Pocono, for all its eccentricities, is a highly technical, extremely long racetrack that will always lend itself to stretches of racing where the field strings out and passing is limited, not to mention that racing side-by-side in any of the corners there is treacherous.

Henderson: Trying to make the racing better is never a bad thing. I don’t know that I’d call one package that’s been tested in two series over the course of two seasons constant tinkering. Are there other areas NASCAR should be looking at?  Absolutely — tires, ride height, choice on suspension and gear ratios and the schedule are all things NASCAR should look at.  I’d love to see a half-dozen things tried in some open tests at Charlotte this off-season. But to scream that the racing is terrible and NASCAR needs to do something about it and then scream at them for trying things seems counterproductive.

McLaughlin: It’s almost pitiful to watch NASCAR continue trying to beat a dead horse thinking perhaps if it hit it harder with a different implement or in a different area of its anatomy that the horse is suddenly going to leap to its hooves and win the Kentucky Derby. That horse is deceased. This horse doesn’t need beating. He’s passed on! This horse is no more! He has ceased to be! He’s s expired and gone to meet his maker! He’s a stiff! Bereft of life, he rests in peace! His metabolic processes are now history! He’s off the twig! He’s kicked the bucket, he’s shuffled off his mortal coil, run down the curtain and joined the bleedin’ choir invisible. Time to start with a fresh piece of paper.

Coburn: Don’t change horses in the middle of the stream if you don’t have to; it makes things too complicated and expensive.

Haverlin: NASCAR needs to stop with the constant tinkering. I can’t imagine the casual race fan liking or even understanding the point of different aero packages every single week, and it just adds to the confusion of what NASCAR has become. The sport needs to let racing be organic; that should suffice.

3. NBC has Dale Earnhardt Jr. moonlighting on its Stanley Cup Finals coverage. If you were trying to bring awareness of NASCAR to more people, what driver would you use, and what sport would you match them up with?

Haverlin: I’d bring Denny Hamlin to NBA games to increase awareness of NASCAR. Hamlin is a friend of Michael Jordan’s (the Jumpman logo is on his firesuit), and Hamlin enjoys playing basketball. If he were part of an NBA Finals broadcast, he could offer analyses of the games while also discussing similarities and differences between being a race car driver and a basketball player.

Coburn: Earnhardt is a good choice maybe for football as well, since he’s a gigantic Washington Redskins fan. For current names, match them up with hockey. Cole Pearn and DJ Kennington with Canadian teams, Kurt and Kyle Busch with the Las Vegas Golden Knights.

Keith: Send the young guns to college football games. William Byron’s sponsor and school, Liberty University, is making the move to FBS this year, and Chase Elliott would fit like a glove anywhere in the SEC or the original ACC, etc. College football bridges young and old better than any sport out there, and it’s one of the few sports that can compete with baseball and racing for the uniqueness of its venues.

Pugliese: Clint Bowyer and Kurt Busch. Bowyer is as close to the stereotypical NASCAR driver that non-believers still associate with the sport, so why not give them the best shining example we have? Busch is genuinely funny, quick-witted and can speak eloquently, even in the midst of some troubling times a few years ago. He’s a great representative of the sport now and would be a great ambassador to help explain the intricacies of the sport.

4. Last weekend we saw a driver error result in the crashing of a Corvette pace car at the IndyCar race in Detroit. What’s the most bizarre thing you can recall seeing happen before the start of a race?

McLaughlin: I believe it was in 1986 at Talladega Superspeedway. Prior to the race, some drunken fan decided he was going to steal a Trans Am. Only problem was the Pontiac in question was the pace car. He took off and the Alabama Highway Patrol took off in pursuit, lights and sirens, Warp Factor 3 after him. Where the brainiac car thief thought he was going on an oval track in that stolen car is lost to history, but once he was taken into custody, he was given a good beatdown to teach him some manners. There are other stories I could tell of the pre-race hi-jinks in the Pocono infield prior to some races, but this is a family-oriented website even if sometimes it seems the folks involved are the Manson family, not the Bradys.

Henderson: A couple of stories that always make me smile have to do with some pre-race pranks. Tiny Lund put a rubber snake in Cale Yarborough’s car while it sat on pit road before a race. Yarborough reacted predictably to what looked like the real thing at first glance. But he got even; he tossed a LIVE snake into Lund’s car the next week — a rattlesnake, no less (he’d had the fangs removed). As the story goes, Lund chased Yarborough with a hammer, but the start of the race cut the aftermath of the prank off at the pass.

Another: Rusty Wallace once stole Dale Earnhardt’s steering wheel before a race in retaliation for a can of sardines in his car on a hot day. He let the Intimidator get worked up about it, and just as the cars were about to roll off the grid and the No. 3 team was scrambling for a back-up, Wallace stuck the wheel out his window. Racing today needs more stories like these.

Pugliese: A couple of things come to mind. The first was during the opening pace laps at Talladega in 2002, when Mark Martin’s steering locked up and he took himself and polesitter Jimmie Johnson into the infield grass. It actually ended up costing him the championship, as he got black-flagged as the race started and never got a caution flag to get himself unlapped. Dale Jarrett had a pretty good view of it from his vantage point.

The second was during this Porsche GT3 race. It was apparently very hot that day, and one of the grid girls passed out from the heat.

Keith: At a dirt track in Arkansas, while laying down water in advance of hot laps, the tank on the back of the water truck fell off the flatbed. The race promoters were fortunate that the tank rolled off the track, because there wasn’t a piece of equipment heavy-duty enough onsite to move it if it had stopped on the racing surface.

Amy, listen to Haverlin, he’s right and you’re wrong.
If everyone would just back off for a couple of years, leave the rules alone, most of the problems would go away.

I have a question for our whining geniuses: Why would a team intentionally break the ride height rule, knowing they would get caught? The Harvick rear window cheat was genius in that it wasn’t visible except at speed. But none of you is nearly as upset about that one as a meaningless technical infraction in an Xfinity race.

I am sick of post-race inspections, period. If a car passes pre-race inspection, it should be considered legal by definition. The race ends at the checkered flag. What would happen if the winning car at Homestead were a millimeter off in post-race inspection? Are they going to announce a new champion on the Wednesday AFTER the season ends?

Throw out the nit-picky rules, the laser inspections, the templates and the silly attempts at parity. There is no parity in life. There is no need for parity in racing. The restrictor plate package which is supposed to make the cars easier to drive is an insult to the more skillful drivers – and most of all to the fans who have to endure winners like Austin Dillon and Ricky Stenhouse Jr., not to even mention Dale Jr. I guess Amy thinks the backmarker players in the PGA should start from the ladies’ tees.