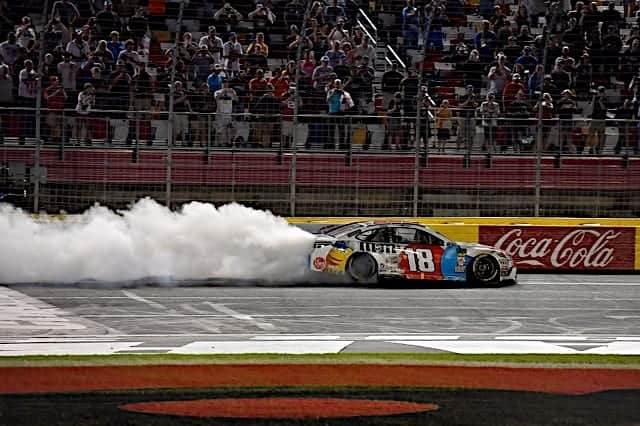 When Kyle Busch exited Charlotte Motor Speedway victorious in the Coca-Cola 600, it not only gave the driver of the No. 18 a victory in one of the Monster Energy NASCAR Cup Series’ crown jewel events that had long eluded him. It also meant he was finally a Charlotte winner.

That’s important because prior to 2018, it would have meant that Busch had won at every track on the Cup schedule — 23-for-23. He’s not just a prolific winner in NASCAR’s top division — he also spreads out his wins across multiple racetracks rather than racking up a half-dozen victories at a handful of tracks.

Of course, that’s changed in 2018, depending on who you ask. With his Charlotte win, Busch has indeed won at every track location on the schedule, but he hasn’t triumphed at each and every configuration.

That’s because beginning in 2018, the series will race on the Charlotte roval, a road course that replaces a second date on the oval-shaped configuration in the fall. Busch hasn’t won there yet. No one has in Cup competition. It’s brand new.

Still, Busch’s Charlotte win gives him victories at 23 out of 24 tracks (OK, configurations) on the Cup schedule. And that’s something that stands unmatched by any other active driver in one of NASCAR’s national series.

When this topic was broached at NASCAR 101 two years ago, Busch was the best then, too. At the time, he was 21-for-23, still a year away from his first Pocono Raceway triumph and two from Charlotte. Back then, Tony Stewart was tied with Busch, having also won at 21 of the 23 tracks. Wins at Kentucky Speedway and Darlington Raceway ended up eluding him by the end of his career later that year.

With Stewart out of the picture, the next closest to Busch’s 23 is Kevin Harvick, who was tied for third two years ago. Harvick has won at 21 tracks, two more than his 19 at this point two years ago, having added wins at Texas Motor Speedway and Sonoma Raceway, both of which he snagged in 2017.

After him, there’s Jimmie Johnson, who was tied with Harvick two years ago but is now one behind him with 20, following his 2016 victory at Homestead-Miami Speedway.

Part-timer Matt Kenseth ranks fourth with wins at 18 tracks, while Denny Hamlin rounds out the top five with 16.

What the article two years ago didn’t do, however, is expand the search to the other two national series.

That being said, the NASCAR XFINITY Series is largely the same story. The series currently competes on 24 tracks as well, and — surprise! — Busch has won on 22 of them, with only two escaping him thus far: the road courses at Mid-Ohio Sports Car Course and Road America. And both of these make perfect sense, given that both are tracks added to the XFINITY schedule after Busch stopped running the full season schedule and remain a conflict with his Cup schedule even now. He’s never even raced at either track in XFINITY competition.

Each of those drivers are full-time Cup competitors, so you may be asking who of the non-full-time Cup drivers actually has wins at the most tracks in XFINITY.

Not counting Kenseth, who’s technically not full-time in Cup, you’re looking at Joe Nemechek, who has wins to his name at 11 of the 24 tracks. Nemechek isn’t a full-time XFINITY competitor either, though, having run six of the 12 races so far this season for JD Motorsports. In fact, he’s not even declaring for points, instead having his starts count in the Camping World Truck Series.

So beyond that, it’s Elliott Sadler and Jeff Green who take the cake. The longtime XFINITY drivers have both won at seven tracks on the schedule.

Meanwhile, the Truck Series — which runs on 20 different tracks in its 23-race schedule — is also led by Busch, who’s won at 16 of the 20. His only blanks are at tracks that, again, he doesn’t have much of a track record at: Eldora Speedway, Canadian Tire Motorsports Park, Iowa Speedway and Gateway Motorsports Park.

It’s tracks like those that help Busch’s closest competitor, Johnny Sauter, close the gap. Sauter’s won at 12 of 20, and lately, he’s been adding more and more each year, meaning he could challenge with Busch before long — with the current roster of tracks, of course.

Combining the schedules of the Cup, XFINITY and Truck series, Busch has victories at all but six of the tracks at which at least one of the national series currently competes: the Charlotte roval, Eldora, Canadian Tire, Road America, Mid-Ohio and Gateway.

Don’t be surprised if, before the end of his career, he ends up knocking off a few of these other tracks, too, especially if he does so after retiring from full-time Cup competition (and given, again, all are still on the schedule). Winning defines Busch, and he also seems to be a bit of a perfectionist in that he wants to have won everywhere he’s gone (or could have gone).

He may not (yet) have Richard Petty’s 200 Cup wins, but that’s still impressive.

Should be Drivers who “have” won or “Driver” who has won.

With no real journalists on staff and no editing of any kind, grammar is clearly not the strong point of FS bloggers. When they write, it is as if English were a foreign language they don’t quite grasp.

It’s premature to say Kyle has won at 23 of 24 configurations, since there has not yet been an actual race at the Charlotte Roval. After that, he may well be 24 out of 241