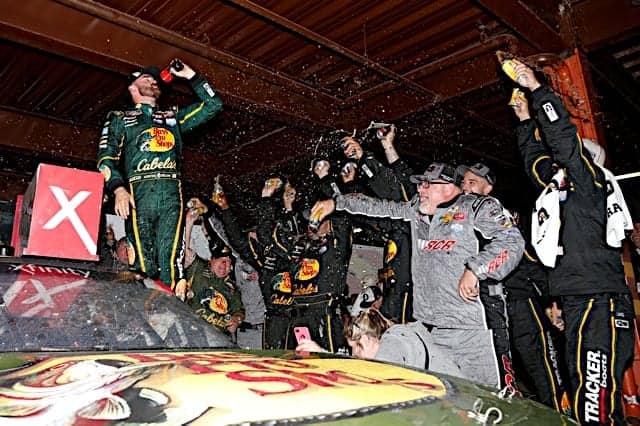 Taking the lead from Kaz Grala with 51 laps to go, Dillon eventually held off Richard Childress Racing teammate Daniel Hemric to score victory in the LTi Printing 250. The race was shortened due to rain which also delayed the event by over three hours.

The win for Dillon is his first in the series since Bristol in August of 2016 and RCR’s first since Road America of the same month.

“This feels good,” Dillon said. “The package was a different type of racing. The fans had to love how tight we were together. Hard to pass that lead guy but we made a couple passes there at the end. I went back to sixth and got back through there. It reminded me of go-kart racing back in the day, it’s what you had to do to move people.”

Hemric missed out on that first win and settled for second. The finish, his sixth top five of 2018, was his second runner-up result in his XFINITY career.

“I’m not sure I did the best job I could have,” Hemric said of the final restart. “I’ll be thinking about it, it’ll be at me for a little while.”

Cole Custer completed the top three, while Ryan Reed and Paul Menard grabbed their best finishes of 2018 in the top five. Custer believed the race felt like a mix of Camping World Truck racing at Michigan and plate racing at Daytona.

“It seems like it’s right in the middle,” Custer said. “You have a little aero effect and then little handling problems you have at Truck racing. It’s really a mix between them.”

The race struggled to complete a green-flag run, as the race’s opening 17-lap run ended up being the longest of the day. In fact, the day’s 10 cautions were the most in Michigan history in the XFINITY Series.

Most of the accidents were mid-pack, with Alex Labbe, Ryan Sieg, Matt Mills and others losing traction of spinning around. The most significant incident occurred on lap 80 when Brandon Hightower crashed into Caesar Bacarella, sparking hard contact and a small fire. Both drivers were released from infield medical care.

Christopher Bell brought out the race’s opening yellow as he spun out of third place on lap 18. The Joe Gibbs Racing driver backed into the Turn 4 wall, spun again on lap 68 and still managed 11th place.

NASCAR proves again that there is no problem in racing that cannot be made worse by restrictor plates. Now we have the ultimate combination of more wrecks, more laps under yellow, and no possibility of passing for the lead. Nirvana!

Just waiting for the glowing reviews from the NASCAR PTB and Amy Henderson.

(Congrats to Justify and his people for winning the only true race of the day. Way to go, Champ!)

It’s amazing how fast one can go with one horse power. And no debris cautions during a real race.

And the best man of the equine persuasion actually won!

Wow!!! Another major league driver drops down to win a AAA race. How exciting is that? Hope you’re proud Austin. Keep up the good (sic) work.

IMHO its the cup lite teams more so than the cup drivers who are ruining it.

And he’s as proud as Kyle too. At least it wasn’t another notch on Kyle’s crib towards 200.