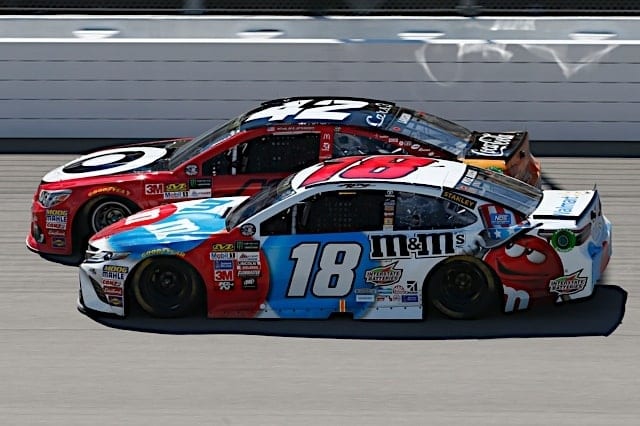 NASCAR heads to Michigan International Speedway this weekend for the FireKeepers Casino 400. Sunday’s race is the first of two at Michigan on the Monster Energy NASCAR Cup Series schedule.

FanDuel debuted its new daily fantasy NASCAR contest at Talladega a few weeks ago and it will continue on throughout the 2018 season. Go to fanduel.com/frontstretch to sign up FREE and you’ll get a FREE contest every night until you win $$$! You literally can’t lose your first time out.

Also, with only 0.1 points awarded for each lap led by a driver, the need for a dominator is less important when building a winning lineup. The 200-lap race will only have a total of 20 points up for grabs in this category. Take note when building your roster and focus on mid-pack drivers who can climb up toward the front on race day.

Here are a three drivers that are primed for a big afternoon at Michigan.

Michigan has not been the best track for Busch over his career. He does have one win back in 2011, but since the re-pave in 2012, his best finish is fourth. On the bright side, he has led 54 laps over the past two Michigan races with finishes of seventh and 10th.

With how he has been driving this season, track history goes out the window. Busch has four wins and leads the series points standings. He also has five additional top-three finishes, including last weekend at Pocono.

Busch will be starting third on Sunday and will compete for the win again this weekend. He was seventh fastest in single-lap speed, and put together the second best 10 consecutive lap average in final practice.

Larson had a terrible qualifying session on Friday and will start 26th as a result. Following his failure to transfer to the second round, Larson mentioned that his car was “far off all day,” which would include opening practice earlier Friday. This was a concern for the defending race winner until the series hit the track for what turned out to be final practice on Saturday.

The No. 42 turned the second fastest single-lap time and the third best consecutive 10 lap average. Many may look at his post-qualifying comments and be concerned, but the bounce back by the No. 42 team on Saturday is a good sign.

Larson has five career wins at the MENCS level and three of them are at Michigan. In fact, he has won the last three MIS races in a row, and is going for a historic four-race win streak this weekend. He would join Hall of Famer Bill Elliott as the only other driver in series history to win four consecutive races at Michigan.

In 2018, Larson has by far been the best performing Chevrolet. His second-place finish last weekend at Pocono was his third runner-up result of the season, meaning the No. 42 team is knocking on the door. A win this weekend would be the manufacturer’s first since February’s season-opening Daytona 500.

Byron will fly under the radar this weekend like he has been all season. The rookie at times has shown the ability to run up front with the veterans and this weekend could be another one of those races.

This will be his first career cup start at Michigan, but he did have a runner-up finish in his only XFINITY Series start at the track last season.

Byron had the eighth fastest single-lap speed in final practice, as well as the seventh best 10 consecutive lap average. He will be starting 14th and could be a fringe top-10 car on Sunday. 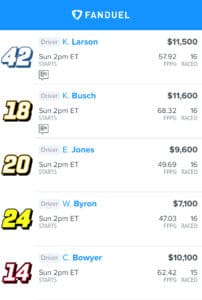