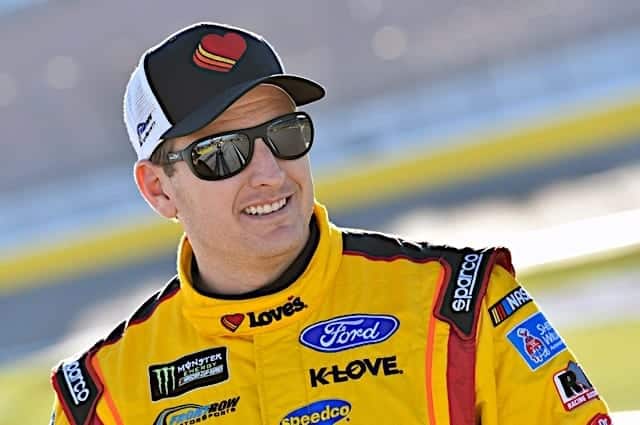 Heading into the 2018 NASCAR season, Michael McDowell knew he had the best opportunity of his career competing full-time for Front Row Motorsports.

Last year was his first full-time season (though having nine partial seasons before) in the Monster Energy NASCAR Cup Series for Leavine Family Racing. However, the team announced in September that Kasey Kahne would be making the move to the No. 95 car, leaving McDowell without a job.

But the time of worry was short, as in December, it was announced McDowell would make the move to the Ford camp, joining Front Row Motorsports in the No. 34 ride. Fast-forward four months into the 2018 season and one top-10 finish later and the Arizona native is fitting in with his new race team.

“We’ve had good moments. I think overall from Front Row with David [Ragan] and I, both teams have shown good progress in speed,” McDowell told Frontstretch on Friday at Michigan International Speedway. “We’ve failed to execute at some races. Some of that is on me and some of that is some mechanical failures and stuff like that.”

McDowell admitted he’s leaned on Ragan, a teammate and personal friend, quite a bit due to his experience with FRM. The veteran driver has had two stints with the race team for a total of five years, winning the team’s first race in 2013 at Talladega Superspeedway.

However, McDowell knows he still has to perform well on the racetrack. Being aligned with Roush Fenway Racing, McDowell believes this is his best opportunity at the Cup level alongside Ragan.

“There’s more pressure this year for me because I’ve got a teammate,” McDowell said. “That’s something new to me because I’ve always been on one-car teams. I’ve never really had anything to judge off of except for my own performance.”

McDowell mentioned that FRM has “access to everything” that Roush Fenway uses with developments and what’s trending. And this has helped their race team, as the No. 34 team has an average finish of 24.6, including a season-high ninth at the Daytona 500.

Meanwhile, Ragan has an organizational best effort of sixth at Talladega in May and his average finish is three positions higher than McDowell. The overall difference from the past few years at FRM? The team has more speed.

“It’s very encouraging,” McDowell said. “To be competitive again is really nice and to be a part of the growth at Front Row and making strides – if you look at just last year, Front Row has had way more top 15s and top-20 finishes. We make the second round of qualifying almost every week, so the team as a whole has made big improvements and I’m thankful to be part of it and on that side of things.”

At Las Vegas Motor Speedway, McDowell finished a practice session ninth. At Bristol Motor Speedway, the No. 34 machine started ninth, though wrecking on Lap 9. With four top-20 finishes through the opening 14 races of the season, the driver expects to be running near the pair of Roush Fenway cars.

“Our expectations are we would like to run with three to five spots of the Roush cars,” he said. “I feel like we should be capable of doing that every weekend and low 20s to teens in average speed, not in just finishes because we want to be in a position to steal top 10s and a top 15 here and there. You can’t do that if you have 30th-place cars.”

McDowell has finished ahead of at least one Roush Fenway Racing team in six of the 14 races.

Moving forward, the road course specialist is putting pressure on himself to run well at Sonoma Raceway and Watkins Glen International over the next two months. He has a best finish of 12th and 14th at the respective tracks, both of which came in 2017.

“I would like to win Sonoma,” he said. “I really do feel like that’s our potential is to win a road course race or a speedway race. That’s what changes organizations like this. It puts you in the playoffs, not just changing it from elevating your platform or brand from a team standpoint, but from a purse and prize money and everything that comes along with it.”

Through the first four months of the season, McDowell sits 27th in the championship standings, 126 points behind Roush driver Ricky Stenhouse Jr., who currently holds the final playoff position.