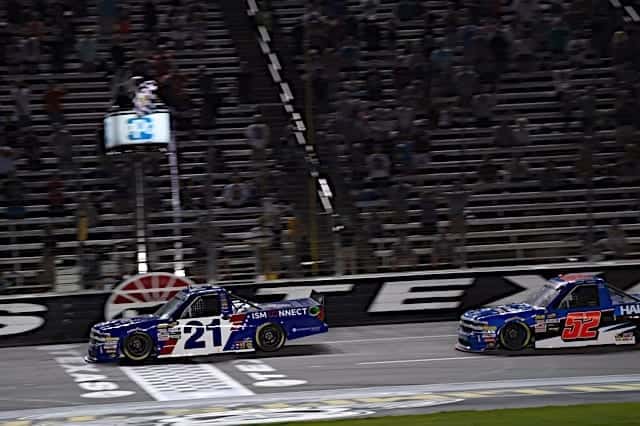 In a Nutshell: Johnny Sauter scored his fourth win of the 2018 season when he beat poles-itter Stewart Friesen to the checkered flag by 0.092 seconds in the Camping World Truck Series’ closest finish at Texas Motor Speedway. The driver of the No. 21 led for the final 51 laps to score his fifth victory at the mile-and-a-half track in the PPG 400. Justin Haley, Grant Enfinger and Matt Crafton rounded out the top five.

Who Should Have Won: Sauter and Todd Gilliland were easily the class of the field once the green flag flew. The pair combined to lead 113 of 167 laps, and even engaged in a spirited battle for the lead early. But when it mattered most, it was the veteran experience that allowed Sauter, who actually ran out of gas on the final lap and had to re-fire the truck, to take his fourth win on the season.

Veteran vs. Rookie@JohnnySauter takes the fight to @ToddGilliland_, but the youngster is having none of it. #PPG400 pic.twitter.com/9KPMoH4MQK

As usual, the Truck Series’ rookie battle is deep with talent, and some of that talent ended up coming together on the track. It didn’t end well, though, as contact between Dalton Sargeant and Myatt Snider sent the No. 13 truck spinning into Jennifer Jo Cobb. Both Cobb and Snider’s trucks were destroyed and each driver had to take the mandatory ride to the infield care center.

Snider called it “hard racing” and cited the rookie battle the two are involved in.

“I’m fine – I’m more worried about the truck,” Snider said after emerging from the infield care center. “Me and the 25 [Sargeant] are in a battle for rookie of the year, so you try and race those guys as hard as you can. Sometimes it doesn’t end up well. It’s just unfortunate what happened.”

As for whether he’ll seek out Sargeant to talk about the incident, Snider said “we’ll see.”

For his part, Sargeant said, “it’s unfortunate but that’s racing.”

Sargeant ended up 11th after starting at the rear of the field due to unapproved adjustments. Snider and Cobb ended up 23rd and 24th, respectively.

For the fourth time in five years, Texas Motor Speedway handed out a high school diploma. The fun tradition began with Erik Jones and later included Cole Custer and Noah Gragson. Now, you can add Gilliland’s name to that list.

.@ToddGilliland_ is officially a high school graduate! Next up he’ll start 2nd in tonight’s #PPG400! pic.twitter.com/3KfUedGPIJ

When it came time to race, Gilliland started seventh and was easily the class of the field early in the event, leading a race-high 62 circuits, blowing away his previous high of a single lap led at Martinsville earlier in the year. When all was said and done, the driver of the No. 4 Toyota walked away with his best result of the season in sixth.

“We had such a strong Mobil 1 Toyota Tundra tonight and that’s what it’s about – bringing fast trucks out here, giving me the opportunity,” he said after the race. “We put on two tires there and we just got them so tight behind – I don’t know if it’s traffic or tires or what, but still very very proud of everyone at Kyle Busch Motorsports. They gave me the truck I needed and now we just need to keep working together.”

The sixth-place finish marks his third in four starts this season and his second consecutive in two mile-and-a-half starts. Gilliland sits 15th in the standings, 106 points behind Haley, who currently sits in the playoff cutoff position in eighth. He will need a win if he’s going to make the playoff field this season, and the way he’s driven in the two races since he turned 18, that win will come at some point this year.

“I just have to thank Halmar International for giving me the opportunity to race at this level and Chevrolet for all of the support over the offseason,” Friesen said. “The GMS fab shop is second-to-none. Me and Justin [Hale] and Johnny [Sauter] raced our heads off there at the end, and that was pretty fun.

“We need to win one, and to win races, we gotta execute the whole race, and we just can’t seem to do that for whatever reason. I love my guys – I’m proud of them. I love working with these guys and we’ll just try again next week.”

“I thought we would have been better – we were better. We got caught up there on pit strategy a little bit,” he explained on pit road after the race. “The truck was fast but it didn’t fire off at all on the short runs. Everybody at DGR-Crosley gave me a really good Globe Sprinkler Toyota. I need to minimize driver errors a little bit and learn more about traffic and air and stuff like that. Overall, I think we’re getting better.”

Man that was fun! I can't thank everyone at @youngsmtrsports enough, they work their butts off! Was glad to be back in the ole 20 tonight! Had a lot of fun can't wait for the next one. Thanks boys! ?

No. of rookies to finish in the top 10: 1; Todd Gilliland, finished sixth

Had a very fast truck tonight @TXMotorSpeedway led a lot of laps but came home with a 6th place finish. Thank you @Mobil1 @ToyotaRacing pic.twitter.com/zvuiyfxHvA

Man what a hot rod we had tonight just got some damage at the end! Awesome job @ToddGilliland_ for your 2nd 1.5 race! Look like a professional! @ToyotaRacing @KBMteam

Points Update: A fourth victory in eight races helped Sauter expand his point lead to 77 over second-place Noah Gragson. Brett Moffitt sits third and holds a slim one-point advantage over Enfinger. Crafton rounds out the top five, 99 markers behind the leader. Ben Rhodes sits sixth, followed by Friesen and Justin Haley. Sargeant and Snider round out the top 10.

Sauter now holds 22 playoff points that he’ll to take with him all through the playoffs, and his second closest competition, Gragson, has tallied 10 so far. Moffitt sits a distant third with six playoff points. Rhodes and Enfinger have two apiece, while Enfinger notched his first one Friday night.

damn @JohnnySauter is good, love being his teammate though, need to pick his brain a bit more to out run him. Proud of @FOEGrandAerie, @GMSRacingLLC

Good recovery and overall good night for our @ProtectHarvest F-150. Great effort by all of the guys @ThorSportRacing bringing good stuff to the track every week! Can’t wait to get to Iowa!

What a blast @TXMotorSpeedway was! @KBMteam Gave me a good @ToyotaRacing @JBLaudio tundra, we ran top 5 all night. P9 from a late race restart that hurt us. Now on the big bird headed to NC! Can’t wait to see my gf @BenfieldAriel #ThankfulForMyLife #OneLuckyGuy #LovingIt

Just got home in North Carolina. Had speed in our @safelite Tundra, just very hard to pass in traffic. Had motor over heat and loss of power the last 10 laps which hurt our results. Led some laps at the beginning but could never get back up there. We go to Iowa next! I’m excited! pic.twitter.com/vAPeq4amXP

No words to discribe how it felt last night but it was another heartbreaker for our team. We are fast enough….. that’s for sure. Just need to figure out what keeps causing this issue……#OnToIowa pic.twitter.com/ke4KZ8Nejz

Up Next: The Camping World Truck Series heads north to Iowa Speedway for an XFINITY Series companion weekend next Saturday night. Coverage for the M&M’s 200 presented by Casey’s General Store begins at 6:30 p.m. ET on FOX Sports 1; the race can also be heard on your local MRN affiliate or SiriusXM NASCAR Channel 90.