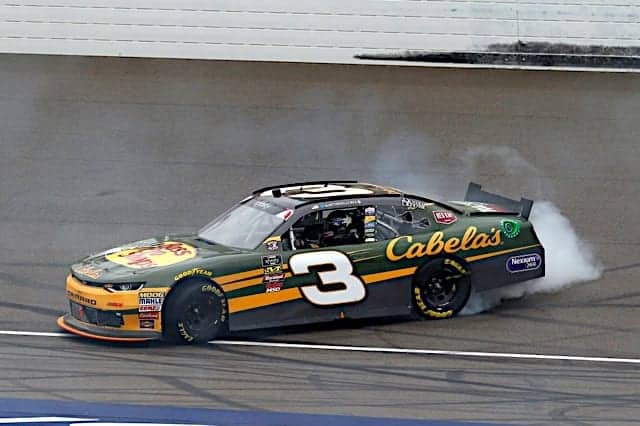 Based off Friday’s practices, Saturday’s LTi 250 at Michigan International Speedway was a much-anticipated event with three and four-wide racing using the new restrictor plate package. However, rain was the story of the day.

Rain has put us on hold for the #LTiPrinting250. Stay tuned to FOX for updates from @MISpeedway! pic.twitter.com/Ko6SE7eHSh

After being delayed by more than three hours, the green flag waved just before 5 p.m. ET, and rain was threatening once the race began. It took 91 laps, but the rain came and Austin Dillon was the leader, picking up Richard Childress Racing’s first victory since the fall of 2016.

“It was a different type of racing,” Dillon said. “Definitely hard to pass the lead guy, but we made a pass on them — a couple of them. I went back to sixth a couple of times and made it back through there. It’s different, but I thought it was pretty interesting and reminded me of go-kart racing.”

Dillon finished the first stage in ninth, ending Stage 2 in eighth. However, crew chief Nick Harrison left the No. 3 on the track hoping the rain would come, and midway through the stage it did. sending the No. 3 to Victory Lane.

Here comes the 3️⃣! @austindillon3 swipes the lead from @KazGrala as the drivers scramble for position with rain moving in! pic.twitter.com/8DTy85MsrR

Daniel Hemric tied a career-high finish of second, picking up a one-two finish for RCR. Cole Custer finished third, while Ryan Reed and Paul Menard rounded out the top five.

As someone who has been critical of NASCARs decision to run the All-Star Race package in regular season events, this was a solid race, though much of the first stage went single-file.

A few months back NASCAR announced it was going to test this package out at Pocono and Michigan, one ended up putting on a better show than the other, hands-down.

It was a no-brainer after the first practice at Pocono that the package wasn’t going to work. But NASCAR was in a tough predicament. Since holding XFINITY races at the Tricky Triangle in 2016, the races have been lackluster at best.

The race wasn’t good and Kyle Busch dominated. But Saturday’s race at Michigan was much different.

Yes, Busch dominated the first stage, but Stage 2 was filled with action. Elliott Sadler ended up taking the stage win in a one-lap shootout, edging out Ryan Truex. That one lap of racing was one of the best laps the series has put on in a while, with three and four-wide battles, looking similar to practice on Friday.

Moving forward, NASCAR should use this package strategically. It’s not something that should be used over and over, because it takes a lot out of the drivers hands. Many of the current drivers have made their claim of just that. But Saturday’s race was a move in the right direction, and something NASCAR should consider for the Cup Series race at Michigan in August.

One of the nastier crashes in recent memory at Michigan happened with 46 laps to go (in the scheduled distance) when Caesar Bacarella spun off Turn 2. In what looked to be a regular spin, Brandon Hightower locked up the front wheels and turned into the outside wall, hard.

A spin for @CBRacing430 and @BHightowerb52 brings out another yellow.

Both drivers have climbed from their cars. pic.twitter.com/7VhKzzuIF3

Once the No. 55 JP Motorsports car hit the wall, it engulfed in flames and when it came to a stop Hightower got out of the car immediately. From an outside perspective, it looked like one of the harder impacts of the season.

Bacarella ended the race in 34th, though finishing 11th in Stage 2. That was just 30 laps after crossing the first green and white checkered flag in 38th to end the first stage. It was his first start since finishing 13th in the season-opening event at Daytona.

Christopher Bell had himself  a race.

The No. 20 car started the race from seventh, though quickly surging to the top five. For much of the first stage, Bell ran in third, behind race leader Kyle Busch and Elliott Sadler, but on Lap 17 he went for a spin in Turn 3 and backed his Toyota into the wall.

After making repairs to the No. 20, Bell fell two laps down, though getting the free pass at the end of Stage 1. On the restart, there was yet another caution, which allowed Bell to get back on the lead lap. The team rebounded to earn two stage points.

Once the final stage began, it was much of the same. With 58 laps to go, yet again, Bell went for a spin, which put him behind for the second time.

Why we're under caution at #XfinitySeries

Despite having a rough day, Bell raced the No. 20 car back to 11th. Ironically enough  on Friday, Bell mentioned in an exclusive interview with Frontstretch that he’s ran well in 2018 when he hasn’t “crashed.” On Saturday, he did both, rebounding to a respectable finish.

One month ago, Kaz Grala wasn’t sure what his XFINITY Series future held. On Saturday, he proved why he belonged.

Sure, Grala has performed well at plate tracks in the past. He won his first start in the Truck Series at Daytona on a track longer than one-mile long in 2017. He picked up a fourth-place finish at Daytona this February in his first career XFINITY start. But Saturday’s race at Michigan was different, and Grala made a difference.

The 19-year-old started shotgun on the field as qualifying was rained out, lining the field up by owner’s points. The No. 61 team has limited owner points because it’s only been on the track for three races, two prior to this weekend.

By the end of the first stage Grala made his way up to eighth, earning three stage points. The No. 61 car remained in the running throughout Stage 2, though again, having to start from the rear due to an uncontrolled tire. He finished the stage in fifth.

Grala raced the car to the lead on a restart in the final stage, pacing the field for five laps. It was the first laps the rookie driver has led since Phoenix in March.

What a day for @FuryRaceCars!!! Came from last TWICE and took the LEAD late in the race! If only it had rained 15 minutes earlier ? I can’t thank everyone on the team enough for their passion and tireless work. This is how we need to perform to continue running this year!! ??

“I like this aero package for this specific event,” Grala said after a 12th-place finish. “I wish the rain had come a little earlier, or I had of gone into Turn 1 with the wheels on the ground. I think either way the outcome would have been a little different. With what we’re trying to accomplish with a small team, we’re trying to prove our worth and get sponsorship and race as many as we can this year.”

Grala ended the day in 12th, his best second top-12 finish since moving to Fury Race Cars at Charlotte Motor Speedway. Moving forward, he’s excited for what the future brings, as long as the team can acquire some sponsorship and run past Iowa next weekend.

“To come from the back twice, you can tell every last person on this team is firing on all cylinders. We’re doing our best to prove what we’ve got here. I think what we’ve got here is pretty good. I think it would be cool to see us run more races this year, and honestly I feel pretty confident that if we were to run full-time, we have a very realistic shot at making the playoffs, even from being far back with what’s been going on.”

Austin Dillon picked up his first victory in 26 starts, dating back to Bristol Motor Speedway in mid-August of 2016. The No. 3 led the final 18 laps, most of which were completed under the yellow flag.

Paul Menard was the next Cup regular in the finishing order in fifth, while Kyle Busch finished just behind in sixth. The No. 18 Toyota won Stage 1, leading 28 laps.

Kevin Harvick was the only other Cup driver in the top 10 (eighth). Ross Chastain, running his 14th Cup race of the season on Sunday finished 14th on Saturday, while Alex Bowman finished 21st, despite leading eight laps. Timmy Hill is the only other double duty driver, coming home 31st.

“Today we were just in the right place at the right time and had great strategy. I think my crew chief had a great strategy and got us track position at the end.” – Cole Custer

“When we have fast race cars and go to the tracks we know we are good at it is a lot of fun and we need to make that kind of progress on the tracks we aren’t so close on. We have a really good team.” – Ryan Reed

Overall, Friday’s practice sessions may have put a lot of pressure on the actual race to turn out well. However, this package was much-improved from Pocono.

There was a lot of side-by-side racing, even if it wasn’t like practice. The majority of Stage 1 was ran single-file with Kyle Busch dominating the event. Whenever a driver would make a move to the inside, they would get freight trained, losing multiple positions.

Compared to Pocono, this package gets two thumbs up. The racing was similar to Daytona, which was a comparison many drivers had coming into the event. I wouldn’t be surprised to see this package implemented in August for the Cup Series race.

The XFINITY Series has a standalone event next Sunday (June 17) at Iowa Speedway. The green flag is scheduled to wave at 5 p.m. ET for the Iowa 250. William Byron is the defending winner, picking up his first victory of the season (and career) en route to the championship.

This race was a complete joke, from the fake plate package to the 14-minute caution to allow the rain to come in and give Dillon another phony win. How much did Childress pay NASCAR for that?

If NASCAR knows they cannot get a full race in before the rain comes, they should not start it at all.