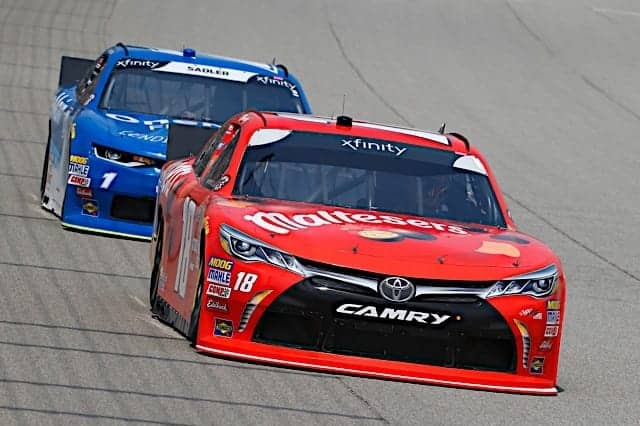 When the rain came to shorten the mornings Cup Series practice at Michigan International Speedway, it put XFINITY Series qualifying in jeopardy. 20 minutes after it was scheduled to start, NASCAR cancelled qualifying for the LTi 250, and the starting lineup will be set per the rule book.

That puts Pocono winner Kyle Busch on the pole, as the No. 18 team is highest in owner points. Alongside will be a fellow Cup Series regular Paul Menard in the classis Joe Gibbs Racing versus Team Penske battle that has been going on in the XFINITY Series for years.

Championship leader Elliott Sadler will start third, while Cole Custer and Daniel Hemric round out the top five.

Tyler Reddick, Christopher Bell, John Hunter Nemechek, Justin Allgaier and Alex Bowman will make up the remainder of the top 10.

Austin Dillon paced final practice, but will have to start from 13th. Kevin Harvick will start 24th in the No. 98 car, while Austin Cindric has to come from 29th.

The green flag is scheduled to wave shortly after 1;45 p.m. ET, though that is also in jeopardy, as the threat of precipitation is in the area throughout the day.

WHY DON’T THEY JUST GIVE “PEE WEE HERMAN LOOK A LIKE” KYLE BUSCH THE TROPHY NOW.