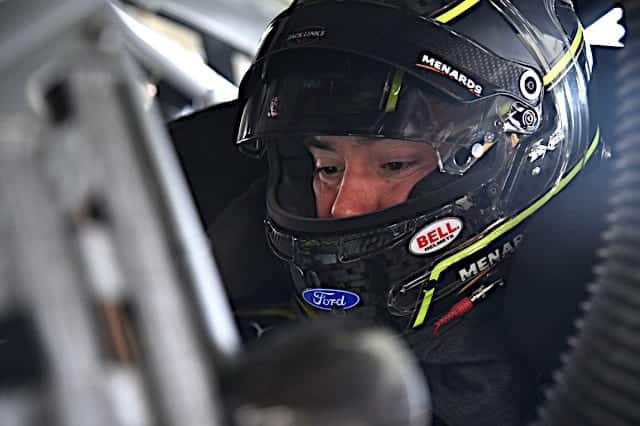 Heading into Sunday’s FireKeepers Casino 400 at Michigan International Speedway, all drivers knew the weather would play a factor, especially after it delayed the initial green flag of the race by more than two hours. However, Paul Menard and Wood Brothers Racing used it to their advantage.

Menard took the green flag from the 15th starting position and maintained that track position throughout much of the opening stage. Meanwhile, when a caution came out on lap 37 for a crash involving Darrell Wallace Jr. and David Ragan, the No. 21 team was caught speeding on pit road.

For the remainder of the stage, Menard tried to make up positions but ended the 60-lap segment in 16th.

The second stage was much of the same. Menard was running in the mid-teens when Daniel Suarez got into the left rear of the No. 21 car coming off Turn 4 on lap 67. The No. 19 car got the worst end of the deal, spinning through the infield grass, while Menard brought his Ford to the attention of his pit crew, where his strategy became crystal clear.

“It was a good car. We had a good car all weekend,” Menard said after the race. “We didn’t qualify as good as we could, and we got put to the back twice; one I sped, and the other time we just got door slammed.

The next caution came out on lap 85 when three-time defending race winner Kyle Larson spun off Turn 4, allowing Menard to stay out. He restarted the race as the race leader, only falling to fifth by the end of the stage, picking up six stage points.”

“I’m really proud of my guys. We made a gutsy call to stay out on no tires with a bunch of laps on it. Gutsy call and we had the car to hold on to it. It worked out.”

In the process, Menard paced the field for three circuits, which were his first laps led since early May at Talladega Superspeedway when the No. 21 led eight laps.

Clean air was everything for Menard and the No. 21 team.

“[The car was] just not as tight basically and we just had more grip,” he explained. “We had a lot of speed. We’ll take it going forward for sure.”

The top-five finish was Menard’s first such finish since moving over to Wood Brothers Racing at the beginning of the season. He moved from 17th to 16th in points and is now four points behind Alex Bowman, who currently sits on the playoff bubble with 11 races to go in the regular season.

I would like to see a match race between the Dillion Brothers, Danica, Amirola, Menard, Trevor Bayne and Derrick Cope.