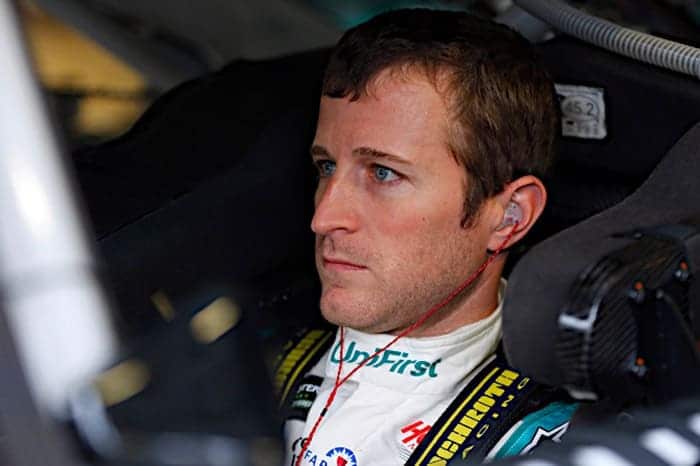 While his finish didn’t necessarily reflect the effort, for a driver for a very small, underfunded team to lead several laps on the day is an accomplishment in itself.  Kasey Kahne started 29th and finished 23rd, but somewhere in the middle, he led twice for a total of 11 laps.  If that doesn’t seem like much, consider that 11 laps is a full third of all the circuits that Leavine Family Racing has led, ever.  It’s also more laps than race winner Clint Bowyer led (eight) and more than the current point leader, Kyle Busch, who didn’t lead a lap on Sunday.  For a team with LFR’s budget, leading laps and running in the top 10 are a huge accomplishment.

It’s hard to say what kind of race we might have seen had rain not been in the picture because the threat of weather always ramps up the urgency as the rain rolls closer. That again seemed to be the case Sunday as the second stage came to a close.  Teams knew they were racing for a win even with 80 laps of the original distance on the table, and everything ramped up accordingly. It’s hard to project the racing Sunday onto what might have happened under blue skies and no threat of rain.

With some calling for shorter races to keep fans interested and to ramp up the urgency sooner, can anything from races like this one be applied?  If a race was 300 miles instead of 500, would drivers race harder for those 300 miles?  To a degree, maybe, if stages were still in play because those would be shortened as well, giving drivers less time to make up the distance to grab those points, but really, no. Strategies would change, but it’s hard to say that the racing would. At some tracks, cars get strung out within a few laps, and with just as much at stake as in a longer race, shorter events would be unlikely to change how the drivers and teams approach the distance. In other words, cutting the miles might cut the broadcast time, but it wouldn’t necessarily change the racing.

Where… did Clint Bowyer come from?

The probably helped, and Bowyer likely would have been in trouble on two tires if the final run had been longer, but crew chief Mike Bugarewicz read the weather just right, so the strategy played out perfectly. Give Bowyer credit as well, though, as he outdrove teammate Kevin Harvick on the final restart, fighting off a charge from the season’s most dominant driver. And when the rain came, he was the man in front of the field.

Some might call a win due to weather an ill-gotten gain, but that’s selling the victor short.  Racing is as much about strategy as it is about speed, and sometimes the better strategy will beat better speed.  Bowyer and his team earned this one, no question. They were fast enough to be a contender regardless.  In fact, the bigger question here is whether anyone can keep up with Stewart-Haas Racing this summer.  With seven wins in 15 races and a one-two-three finish Sunday, the organization has staked a claim as the best in the sport. Even Aric Almirola was as fast as his teammates on the track, though pit road problems left him to finish 11th. SHR is the only organization to have multiple winners in 2018.  Bowyer’s win was no fluke.

Credit to NASCAR here for not prolonging the inevitable and calling the race as soon as the rain returned, but Mother Nature certainly had her way with the sport this weekend, with both the XFINITY and Cup races cut short as the skies opened up. Spring rains and summer storms (and even a snowstorm!) have certainly wreaked havoc on NASCAR this year, but there isn’t much that can be done. There’s only so much tweaking the schedule can take, because well, winter.  There aren’t a lot of places that can host races in February and even March and not have to worry about winter weather, and summer rains happen occasionally too.

The fans who stuck through a soggy delay deserve some props, as do the race teams.  Sure the crews are getting paid, but they’re also pulling extra hours and keeping their teams ready to race.  So, while it’s unfortunate the race was cut short, NASCAR did everything it could have, the winning team made a great call, and the fans at the track stuck it out. Sometimes you just have to make the proverbial lemonade.

Why… didn’t Kyle Larson, winner of the last three races at MIS, pull it off?

Larson had a great first stage despite a subpar qualifying effort that put him 26th for the start. He finished the stage in second and looked like he’d be a contender once again, but 16 laps into the second stage, Larson spun in Turn 4.  He was able to continue and finished on the lead lap thanks to a late caution, but he finished a disappointing 28th.  2018 has been an exercise in frustration for Larson, who could easily have a win or two by now. He’s been a contender nearly everywhere but has been hampered by bad luck, some of his and his team’s own making, some not.

Still, if racing consists of ebbs and flows, Larson looks like he could be the next driver to reel off some great finishes.  He’s got speed most weeks, and he’s the type of aggressive driver who can make up for his car when it doesn’t have the speed to win.

How… much passion was lacking from Sunday’s race?

On what would prove to be the final caution on Sunday before the rains came, Kahne got into the back of Ricky Stenhouse Jr. and sent the No. 17 spinning.  It looked as though the car in front of Stenhouse checked up and the contact was more the result of a chain reaction than aggression, and the FOX booth made a big deal out of it being a racing incident, which it was.

But watching it, it does beg a significant question: How many on-track incidents these days are simply the result of aerodynamics or chain reactions versus being caused by driver aggression?  And what happened to the days when using the chrome horn was just part of the game?

That’s not saying drivers should wantonly wreck each other, especially at a track like Michigan.  Aerodynamics plays a role, too, because the cars are so temperamental, and just getting close to another car can upset one or the other into a spin. Still, even at tracks like Martinsville, drivers seem to lack the aggression that was once commonplace in the sport.

There’s a ton at stake now, and sponsors perhaps take a dim view of using bumpers, but what it translates as, particularly on television, is a lack of hunger for position or points.  It isn’t that drivers aren’t racing hard, because they are, but there seems to be either an unwillingness or an inability (as in aerodynamic, not skill) to toe the line.  Lack of passion is, perhaps, an unfair assessment, because it’s not that drivers want to win less, but rather the cars and sponsors and maybe something less definable what has changed.  But something has.

My moment of truth yesterday was when I realized that I had more important things to do.

Kahne has been a bust in the #95. Michael McDowell had the program in better shape, with a better average start, average finish and points position. Kahne’s best finish is 17th. McDowell finished better than 17th, six times last year.

How many Chevy teams have improved their results compared to this point last year? The 95 has held ground or improved slightly overall. Most other Chevy teams can’t say that.

My mom is a Nascar fan; has been all her life. And what else is an 81 year old fan going do on a Sunday afternoon? So she called me and asked if I was watching the race, and I think she went into shock when I told her I was watching America’s Funniest Videos. I don’t know which one of us had the most pathetic afternoon, but at least I was laughing. Meanwhile, mom continues to spend her Sundays rooting for “Whoever is driving Richard’s 43 car”.