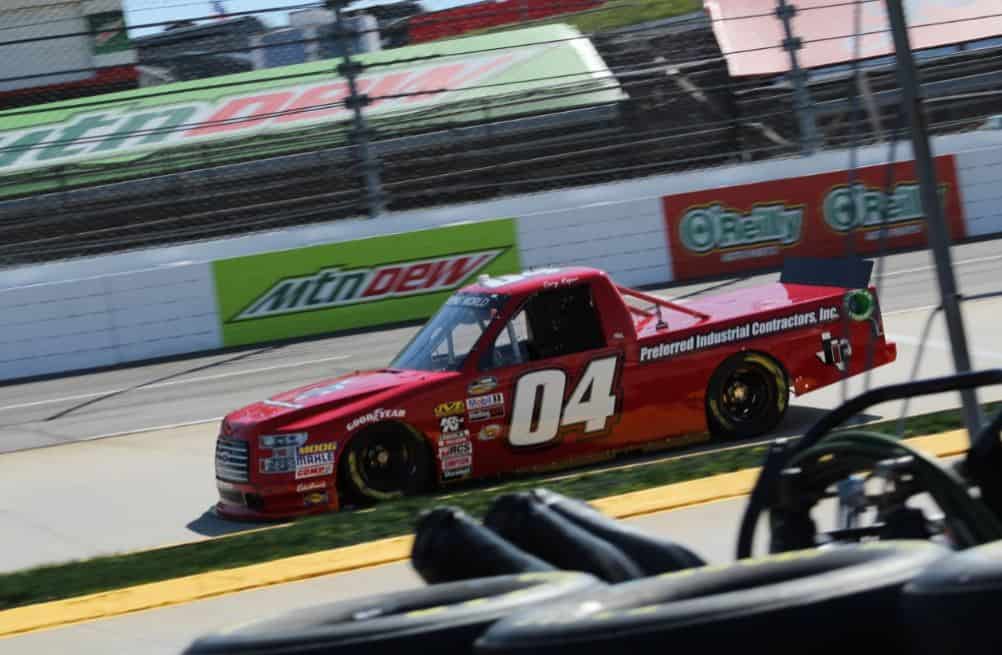 Back in March, a team showed up on the entry list for the NASCAR Camping World Truck Series race at Martinsville Speedway that few in NASCAR had ever heard of: Roper Racing Team.

The team’s No. 04 Ford, driven by owner Cory Roper, surprised the racing world that weekend when it advanced to the second round of qualifying in its first showing. The team then braved two days of snow delays before the race itself concluded on Monday. When the dust finally settled, Roper turned a respectable 17th-place starting spot into a solid 13th-place finish. He ran all the laps and fought hard to beat drivers with much bigger teams, such as Todd Gilliland, Matt Crafton and Johnny Sauter.

The little team that could returns to action this Saturday night (June 16) at Iowa Speedway. The team announced its plans for the rest of the season on its Facebook page Monday (June 11).

Roper is an owner/driver in an era of NASCAR where that has become nearly extinct. His race team is based in Baytown, Texas, and consists of his brothers, dad and family friends, all of whom volunteer their time. His brother, Craig, serves as crew chief.

The sponsor on the hood of the team is Preferred Industrial Contractors, a company Roper owns. The team races weekly at Houston Motorsports Park but turned its eye on the Truck Series after new rules introduced spec engines to the series as a cheaper alternative. Roper purchased trucks from Brad Keselowski Racing after its truck teams shut down and Ilmor’s NT1 engine.

Frontstretch editor Michael Massie caught up with Roper to get the full story on his transition into the Truck Series.

Michael Massie, Frontstretch:  Well, first off, what’d you think about Martinsville? You did pretty well there.

Cory Roper: Yeah, it was a little surprising. I was comfortable. I’ve never been in anything that heavy, so you know, the weight was a little bit different, but yeah, I think we did fine. I think if we could’ve had a little better track position, I think we might’ve been able to stay there. The car was fast, and that’s what we wanted to do, was just be able to stay in the same zip code.

Massie: That race made headlines because it was delayed by snow for two days. Did that hurt you guys from a budget standpoint, and was there any thought of just packing up and going home when it got delayed?

Roper: No, not really. We never planned on packing up and going home, but it did put a strain on some of the guys that were there. … We all have full-time jobs, we have responsibilities at work, and that was hard on [the team] to stay there. And these guys also drive the rig, so we got delayed two days, and then it takes us two days to get home. We had the RV and we had the semi, and we drive these things to and from. … So we were on conference calls in the trailer, trying to handle projects. These guys run large crews [at their day jobs], and that’s what they were doing [from the track]. They did what they had to do. It was a lot of [multi-tasking].

These guys work 10- to 12-hour days, and then they show up at the shop and we work six or seven hours at night. Then, they go home, get up and do it again the next day. It’s what we do because we love it.

Massie: It looked like you were right in there with Kyle Busch Motorsports trucks and Timothy Peters — just some quality rides there you were competing with. How’d it feel to be racing around guys like that?

Roper: You know, at the time, it didn’t really dawn on me, but afterwards — especially after I watched it — it was pretty neat. You dream about this your whole life, right? What I was proud about more than anything was me and my brothers and a couple of good friends that I’ve got, we built these things. We’d never seen a [CWTS] truck until we went and picked it up. With the help of… some guys that were with BKR… they helped us procure all the parts we that need and kind of talked us through building these things, and they helped us at the racetrack. We were able to be pretty successful for our first time out for us not knowing a lot about it. We’ve run late models, we’ve built cars our whole life, but this is a new thing for us.

Massie: How many trucks did you buy from BKR?

Roper: We bought three trucks and one Ilmor engine. It’s kind of an odd story how it happened. I was just helping a guy that I’ve raced against for many years in late models and had a lot of respect for him. I think you actually did a story on him, Bayley Currey. He had a Truck deal that was going on… his deal was going south or something late last year… I’m 40 years old, so I’ve been his age of wanting to race. The only reason I ever had a job was so I could race. I know how it is when things don’t come together, when sponsorships don’t come together, and I was like, ‘Well, what do y’all need?’ So I kind of helped them get to a couple races last year [with sponsorship through his company].

The first race we went to was Martinsville, of course. … Man, I was just walking down pit road there and heard about the Ilmor engine thing, and I was just like, ‘Man, that sounds like it would be a great deal.’ I walked up into one of BKR’s pits and ran into a guy who worked at BKR. I liked him, we hit it off and got to talking. … It wasn’t a week later I had three trucks bought and an Ilmor engine ordered.

And here we are NASCAR racing, something I never thought I’d… I didn’t give up on it, but it was one of those things that, it seemed far-fetched. The money it costs to do this is extremely expensive, and with some of the changes that NASCAR made, it opened the door up and somebody like me has an opportunity again — to live out the dream even though I am 40.

Massie: Now, there’s been a lot of talk about grassroots racing recently. Kevin Harvick stirred it up not too long ago. So what does it mean to you to have a team run by your family, your friends? Does it feel like you’re throwing it back to the early days of NASCAR?

Roper: Maybe a little bit. I hope NASCAR keeps changing some of the rules that would allow people like us to get in it. Talent is one thing, you have to have a driver. There’s hundreds and hundreds of racecar drivers out here that have the talent to drive these cars, but the means to build them and the means to be able to afford to race them is the other side of it. That’s always been the hard side. … If we could move into what they did on the [NASCAR] XFINITY [Series] side, get a composite body — something that somebody can acquire a chassis and be able to put together a car themselves without the wind tunnel being such a big issue, some of the things like that — I think you can bring it back down to maybe some more grassroots feeling of racing.

Massie: In the Truck Series, there’s been a lot of talk about the schedule recently. Do you think it’s good the way it is, or do you think there should be more short tracks, more of these local racetracks?

Roper: Because since the aero side of this is such a big part of our tracks, that’s kind of a hard question. Because we may have done decent at Martinsville, but I have no idea how good we’re going to do at something where aero has a lot to do with how you run compared to everybody else, right? But at the same time, I’ve run on quarter-miles, three-eighths, half-miles, five-eighths, I’ve run on them my whole life. That’s not really what I was looking for when I got into NASCAR. You know, I want to run on mile-and-a-halves, I want to run the larger tracks and see how that works for us, and I’m excited about going to them. So I think it’s fine like it is.