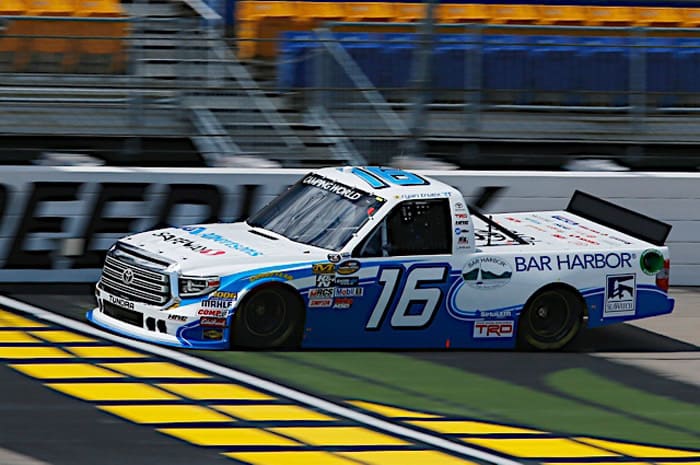 For Saturday night’s M&M’s 200 presented by Casey’s General Store, 35 teams have posted entries.  As a result, three teams will be forced to leave Iowa Speedway with their tails between their legs after failing to qualify.

There are some changes of note.  Tanner Thorson is back in Young’s Motorsports’ No. 20 Chevrolet, replacing Tyler Young.  The team is also entering a third truck for Reid Wilson.  Wilson made his Camping World Truck Series debut for Young’s Motorsports in their No. 20 at Martinsville.  He finished 16th there after starting 20th.

Kyle Busch Motorsports is fielding their part-time fourth truck, the No. 46, for 17-year old Christian Eckes to make his Camping World Truck Series debut.  Eckes, the 2016 Snowball Derby winner, is running part-time for Venturini Motorsports on the shorter tracks.  He won back in April at Salem in a long duel with Chandler Smith that ended with Smith smacking the wall due to a blown tire.

Robby Lyons is currently listed in Premium Motorsports’ No. 15 Chevrolet, his normal ride.  Last weekend, Lyons fell ill in Texas, forcing him to miss the race.  Reed Sorenson was forced to fill-in.

Cory Roper is back to make his second career start this weekend with his family team.  We’ll have some more about Roper on Wednesday.

There are currently two entries with TBA drivers.  One is Beaver Motorsports’ No. 50 Chevrolet.  The other is Mike Harmon Racing’s No. 74.  The team is planning to announce their driver for Iowa later this week.