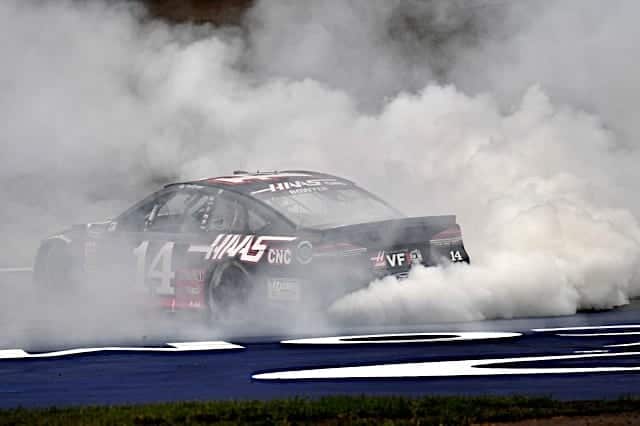 Is there anything more entertaining than a Clint Bowyer Victory Lane? Earning his second race win of 2018 — his first multi-victory season since 2012 — Bowyer’s post-race celebrations and antics from Michigan International Speedway flooded social media and his loud, exuberant interviews could be heard in Scotland.

Clint Bowyer really likes winning before an off weekend. He needs a few extra days to celebrate. pic.twitter.com/i4eB5vpsKz

The win gives Stewart-Haas Racing seven victories this season (Bowyer’s teammate Kevin Harvick earned the other five). They’re staking their claim as top dog in the NASCAR playoffs and continuing a strong season for Ford. In fact, SHR’s 1-2-3 finish at MIS (add Kurt Busch in third) was the first such sweep in team history.

Meanwhile, Bubba Wallace and William Byron continue their Rookie of the Year battle outside the limelight. Neither one has made a lot of noise this season as they continue to log laps and gain experience. It isn’t looking they will have much to say in the postseason, either with Byron sitting 20th in points and Wallace in 24th, unless one of them happens to sneak into Victory Lane before September.

Which one has the edge? I’ll delve deeper into that and more in the latest edition of NASCAR Mailbox, answering questions from you, our devoted fans.

If you would like to see your question answered in a future edition of NASCAR Mailbox, please send an e-mail to frontstretcheditors@googlegroups.com.

Do you think Clint Bowyer is a legitimate championship contender after his win at Michigan? – Diane H., Trenton, NJ

Yes, Bowyer is a legitimate title contender. He is finally driving for a stable organization with fast cars every week, paired with teammates who are consistently up front and contending for wins.

We know Bowyer’s journey to SHR hasn’t been easy the last several years. Before Tony Stewart hired him as driver of the No. 14, Bowyer’s future was cloudy with the pending shutdown of Michael Waltrip Racing. He had a ton of success with the team in 2012, winning three races en route to finishing runner-up in points to champion Brad Keselowski. Bowyer made the NASCAR playoffs a total of three times during his tenure with MWR.

But in the other two seasons, he was not close to being a championship threat. And after Spingate, the infamous 2013 incident in which Bowyer intentionally spun at Richmond, his race team never recovered.

Once MWR shut down, Bowyer spent a frustrating year with HScott Motorsports and the late Harry Scott before transitioning to Stewart’s ride. Going without a top-five finish that season, he remained winless since the June 2012 race at Sonoma.

So after many years of major struggles, 2017 came and Bowyer was at SHR. Without winning a race, he still had 13 top-10 finishes, still a quality improvement from the year before. But Bowyer missed the playoffs and struggled for sponsorship, making 2018 a major question mark.

Not anymore. After snapping his winless streak this season at Martinsville, Bowyer now has two victories, raising his level of performance. Combine Bowyer’s personality with his talent and you have an amazing character for the sport of NASCAR. Right now, this team could be his best chance ever to win a Monster Energy NASCAR Cup Series title. Even Bowyer’s days at Richard Childress Racing didn’t produce this much of an improvement.

Not only has Bowyer now won multiple races, one of only four drivers who have done so this year but he’s been consistent. Consistency can win championships, even if this playoff system rewards winning more than consistency.

I feel as if Bowyer is finally at a time in his life and his career where he can feel relaxed, confident, and motivated to reach the peak of the sport. His NASCAR XFINITY Series title back in 2008 proved the driver is championship material.

I believe that Bowyer is a top-five contender right now, the best of the rest behind the Harvick-Busch-Truex trio at the top. That may seem a bit overstated, but with the way SHR has run this season, he is back near the cusp of title contention.

I don’t think Bowyer is done winning races yet this year either.  I definitely could see him winning a few more, especially if Ford’s dominance continues.  Even though his teammate Kevin Harvick is number one when it comes to contenders right now, Bowyer is definitely in the conversation as the second-strongest Ford team. I love his confidence and his attitude. Expect years of hard work from the veteran to keep paying off, perhaps with a trip to Homestead-Miami Speedway this November as part of the Championship 4.

What do you think about the Rookie of the Year battle between Bubba Wallace and William Byron so far this year? – Robert T., Columbia, SC

This rookie race has been a very intriguing battle through the first 15 races of this season. Let’s look at the two young guns.

Wallace has had an interesting path to the Monster Energy NASCAR Cup Series. He earned multiple victories for Kyle Busch Motorsports in the Truck Series during 2013 and 2014. He then drove for Roush Fenway Racing’s NASCAR XFINITY Series team from 2015 until 2017, when the team shut down midway through the season.

Subbing for an injured Aric Almirola after that and having a ton of success in that car changed the game for Wallace. It solidified his spot in Cup, moving to RPM once Almirola left the No. 43 car to go to SHR.

Since the promotion, Wallace has had some success this year. His second-place finish in the Daytona 500 immediately raised expectations although the No. 43 team hasn’t cracked the top five since. He’s had some races that have been rougher than others but run around the top 20 in most events. The average finish of 21.5 is respectable for a first-year driver.

Byron, by comparison is the defending NASCAR XFINITY Series champion. He also dominated the Camping World Truck Series in 2016, winning seven races. Had it not been for a blown engine at ISM Raceway, he probably would have been series champion. He has a K&N East Series championship on his resumé as well back in 2015. And keep in mind Byron is just 20 years old and has only been racing since he was a teenager.

Compared to past history, Byron’s start this season has been rather rough. He has only one top-10 finish, which came at Texas, and has failed to finish three times. It’s fair to say his struggles could be because of Hendrick Motorsports’ adjustment to the new Camaro ZL1 bodies. However, it does seem like they’re all getting faster every week and becoming more competitive.

Currently, Byron leads the battle between the two. However, I expect both drivers to improve their results as the season moves along. Both are driving Chevrolets and we have documented their struggles plenty of times. But as I said earlier, it seems like every week, they all gain more speed.

Will either one win a race? I’m not sure about that. I do believe both will be near the top 10 as they visit tracks for a second time this year.

Keep in mind Wallace is in the stretch of the season that he was in the No. 43 during 2017. I think he will have some solid runs as he returns to some familiar racetracks and as the playoffs near.

As Byron gets more seat time in these Cup cars, I think he’ll be consistently in the top 10-15 every week. Earlier in the year, it was a struggle for Byron to simply reach the top 20 at times. He did lead some laps at ISM Raceway in the fourth race of the year and I expect that total to tick up.

Ultimately, I do believe Byron will win the Rookie of the Year battle. But expect it to be close between the two of them all the way through Homestead-Miami Speedway in November. Both drivers are extremely talented and the more experience they get, the better they will be. It’s not going to be overnight success but in time, they are both going to be two of our sport’s big stars.

They are both still young, and as the year goes on, perhaps one of them can find their way to steal a win and lock themselves into the NASCAR playoffs. But it’s a longshot. Gaining experience this year should be the main goal, and both are doing a great job of that in my opinion.

One of the longest winless droughts of an active driver. One win, then a rain soaked race that was pau with MANY more laps to go. So two wins in a century(sarc), 1 legit, 1 a gift from mother nature. Ah no. But, with this stupid format….the hotdog vendor could win the Homestead Cup.

lol!! made me spew my cereal!

Gotta love Clint! And, Yes, I think he is a legitimate contender!

If he is in the top 5 in points when Homestead comes around then yes, if not then no.