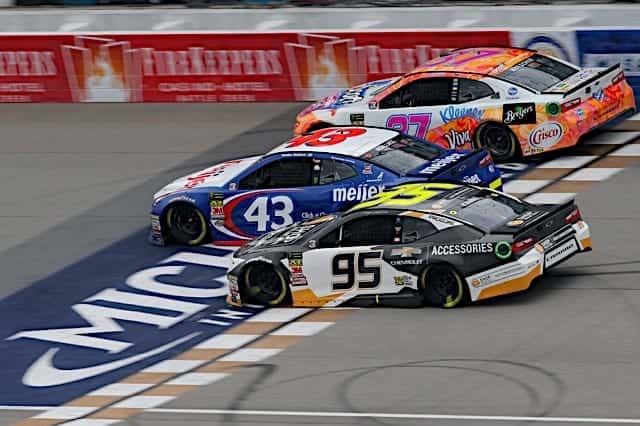 With an upcoming week off for the Monster Energy NASCAR Cup Series, Sunday’s (June 10) long day in Michigan felt even longer once the rain started to hit. And the importance of this final race before break was shown on the racetrack during the FireKeepers Casino 400.

Michigan is two miles long and stands out from the pack of circuits for one reason: speed. While qualifying showed average speeds reach 203 mph for pole, the top speeds entering Turn 1 were approaching 220 mph, speeds that are certifiably breakneck by most accounts.

And when you add off-and-on, light-and-heavy rainfall from early morning to late afternoon, you have the fastest race thus far of 2018 racing to a checkered flag nobody knew when would fall.

The underdogs had a lot to keep up with through an eventual 133-lap race. The whole field had Stewart-Haas Racing to catch but the small teams had grip and track position to nail down toward the top 20. These difficulties saw only a couple reach the top 20 at day’s end while more suffered accidents on the day.

Either way, it’s a nice time for a week off for the underdogs.

As mentioned, only two underdogs hit the top 20 on Sunday. The top finisher was AJ Allmendinger, the JTG Daugherty Racing driver who came home 17th and earned his fourth Frontstretch “Underdog of the Race” of 2018. Additionally, the finish was only Allmendinger’s second top-20 result in the last seven races

The day simply came to Allmendinger, who ran outside the top 20 on average and only ran as high as 15th from start to finish. It was the fourth straight Michigan race where his finishing position was higher than his mid-race position, showing a certain level of grind in the Irish Hills.

Darrell Wallace Jr. also ground away at Sunday’s race, finishing the day 19th after an early accident knocked him back a few yards. The wreck occurred on lap 37 when he drifted wide and into David Ragan in Turn 1, spinning his No. 43 around and ending Ragan’s day right then and there.

Wallace, however, avoided significant contact and was able to continue on with his Chevrolet. And similar to Allmendinger, a top 20 wasn’t looking too likely by the completion of stage two on lap 120. But with the final restart bringing in a little strategy, Wallace survived it all to pierce the top 20 for the second straight time at Michigan and seventh time in 15 races this year.

The final top underdog was among the top-three finishers, however, showed some potential throughout the day at Michigan. That was Kasey Kahne, the Leavine Family Racing driver who used pit strategy to restart as the leader on lap 63. Surprisingly, he held off Kevin Harvick and Ryan Blaney on a one-lap restart in stage two, eventually leading eleven laps (most of which under caution).

Returning to the lead under similar circumstances on lap 123 under yellow, the No. 95 chose to pit under the caution, opting out of gambling for its first win as the rain soon fell over the course. Kahne finished the day 23rd, leading his most laps since Indianapolis of 2017 and the team’s most ever in a single race.

Ty Dillon ran 21st for Germain Racing, another result that entertains the question of when we’ll see more from the No. 13 Chevrolet. Dillon is a sophomore in the series now and has seen no improvement over 2017. Sunday was his fifth straight finish outside the top 20 and it didn’t help his 29th-place spot in driver points.

Chris Buescher has seen improved numbers from last year but didn’t see much speed at Michigan. The No. 37 JTG driver ran only 24th on the day while teammate Allmendinger was the top underdog of the day.

Michael McDowell was also fairly quiet in his Front Row Motorsports Ford, finishing 25th on the day. It was his eighth top 25 in his first season with the team this year.

Multiple cautions and a shorter distance gave some drivers rare lead-lap finishes. This group was led by Ross Chastain, who grabbed his first lead-lap result in his 16th Cup start, finishing 26th. Corey Lajoie was one spot back in 27th, earning his second-career lead-lap finish and first since Daytona last July.

Ragan’s day ended quickly after his crash with Wallace, which saw the No. 38 back into the Turn 1 wall on lap 36. Even then, his day was better than Garrett Smithley, whose Cup debut ended after suffering a transmission issue on the opening lap for StarCom Racing.

It was a triple-header weekend for NASCAR, which expanded from Michigan in Cup and XFINITY to Texas Motor Speedway and the Camping World Truck Series.

Saturday’s XFINITY race was also rain-shortened to 91 laps and saw little underdog activity outside one Kaz Grala. The new team of Fury Race Cars started last on the field and drove up to earn points in both stages before leading five laps. A 12th-place finish was its second top-dozen result in three races.

Stewart Friesen was again the Truck Series’ top underdog, finishing second only 0.092 seconds behind winner Johnny Sauter. Tyler Young was the less noticeable underdog performer Friday night, finishing seventh for his family-owned race team. The finish was his best non-plate finish and it came at his home track.

Well we got wrecked today and all done.

Hate it for all the @Team_FRM #38 team. We will keep our focus and get ready for Sonoma!

Crazy day. Stepped on it into 1 and cost @DavidRagan and their team a good race. Rebounded someehat, we fired off super tight that last run. Could've been a lot better finish for us. We got some things to clean up still. That's what the off weekend is for. Congrats @ClintBowyer!

I’ve got the best fans in @NASCAR! Huge line today at @MISpeedway! pic.twitter.com/hxROjGrQgL

Can someone explain to me why some of the back teams did not try the same two tire strategy (accidental or not) that the 14 did on the last pit stop?

Seems super bizarre if running back half of the top 20 on back not to have at least tried it. Also, seems odd Kassy Kahne’s crew chief elected to stay out and then pit last minute. Was there a fuel issue or just did not want to chance it. If was going to be out of gas in 10 laps then I see it but why not pit with everyone else and take two tires.

If fuel was no issue, stay on track and see what happens. Might have been a top 10 or top 15

When will Jimmie Johnson qualify to be part of the Underdog House?