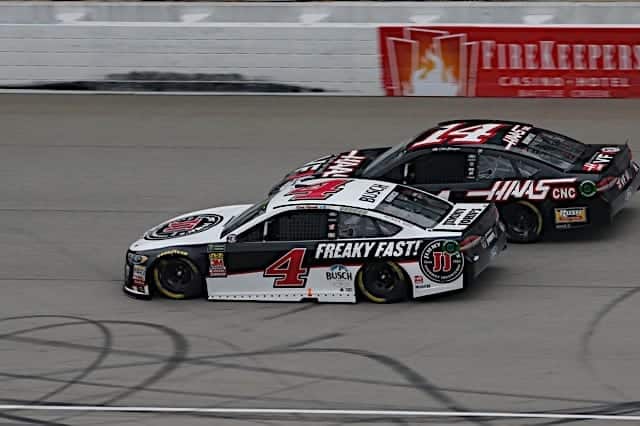 Whether or not their competition is ready, the Ford Fusions of Stewart-Haas Racing and Team Penske are still by far the class of the field in the Monster Energy NASCAR Cup Series this season.

After a two-hour delay for the start of Sunday’s race (June 10) at Michigan International Speedway, the Fords joined all other drivers in trying to outrun the storm’s return. The weather held off to the end of stage two, this time lap 120, to make the race official.

But no matter how or when it rained, Fords remained in complete control throughout. Ryan Blaney won the first stage after passing pole sitter Kurt Busch. For the most part, Kevin Harvick paced the field in the second stage, which he won, though Kasey Kahne managed a Chevrolet-high 11 laps led after several cautions.

Three-time defending track winner Kyle Larson started 26th and rallied up into the top 10 before spinning halfway through stage two, tearing up his splitter after mowing the infield grass. That took about the only non-SHR/Penske threat out of the picture, as Larson finished in 28th.

At the stage three restart, Clint Bowyer only took two tires, starting up front alongside teammate Harvick. After a drag race for a full lap, the No. 14 pulled ahead of the No. 4. Almost immediately, the rain began to pour down, bringing the action to a stop following 133 of the scheduled 200 laps.

This victory marks Bowyer’s second in 2018, as he was also triumphant in the snow-delayed STP 500 at Martinsville in late March. The win is SHR’s seventh this season.

Harvick was runner-up for the second time this year, and their teammate Kurt Busch was third, just ahead of his brother Kyle in the No. 18 Joe Gibbs Racing Toyota Camry. Paul Menard used pit strategy to round out the top five.

Brad Keselowski was sixth at his home track, followed by teammates Joey Logano and Blaney. Chase Elliott matched his car number with a ninth-place finish for Hendrick Motorsports, while Larson’s Chip Ganassi Racing teammate Jamie McMurray scored his third top-10 run of the season in 10th.

For the first time in its 10-year history, Stewart-Haas Racing had cars sweep the podium, the first time a team did that in nearly its years. The organization’s fourth driver, Aric Almirola, was 11th after overcoming pit stop problems. Penske’s all-top-10 race was the fifth time that’s happened this season, and their unofficial fourth car, the Wood Brothers No. 21, had its best finish of the year.

The last time one team finished 1-2-3? That was September 2008 at Dover, when Roush Fenway Racing accomplished the feat with Greg Biffle, Matt Kenseth and Carl Edwards, where the rest of the top 10 included Mark Martin, Jeff Burton and Michael Waltrip. RFR didn’t have the same kind of day on Sunday. Kenseth got into the wall early and finished a lap down in 33rd, while Ricky Stenhouse Jr. had contact early with Austin Dillon before contact from Kahne put him into the wall for a 29th-place result. In the owner standings, the No. 6 is tied with Germain Racing’s No. 13 for 29th place, while Stenhouse is tied with Menard for the top spot outside the playoff bubble in the driver standings.

Elliott isn’t setting the world aflame by the standards of Hendrick’s recent history, but his season is slowly heating up, and Michigan is one of his better tracks – his previous finishes there were second, second, second and eighth. His ninth-place run on Sunday was his seventh top 10 and 11th top 15 of the year, and his worst finish the past seven races has been 12th at Dover and Kansas.

It wasn’t a good day for Toyotas. Three of the JGR cars had splitter issues during prerace inspection and were forced to start in the back, none of its drivers led laps and Martin Truex Jr. was never a factor, finishing a lackluster 18th. Plus, Daniel Suarez has hit a cold streak. His spin brought out one of the stage two yellows, and the past four races his finishes are 26th, 15th, 24th and 30th. That’s dropped him down to 21st in points, about 70 points behind the cutoff.

AJ Allmendinger finished 17th in the No. 47 Chevy, the third time in the past four races that JTG-Daugherty Racing has finished in the top 20 after his 16th at Kansas and Chris Buescher‘s 17th at Pocono last week. It was one of the better days for Childress-affiliated cars, as Austin Dillon was 14th, Darrell Wallace Jr. was 19th and Ty Dillon was 21st.

This is the third straight week that Matt DiBenedetto has finished near the back of the pack, as the No. 32 Ford was 36th out of 39 cars, finishing two laps down. That is technically an improvement over the 37th-place finishes of the previous races, but still, Go FAS Racing is capable of running top 30 most of the time. The team has even scored three finishes in the 15th – 20th range this season.

When Monster Energy is on the hood of Kurt Busch’s No. 41 Ford Fusion, it feels like more often than not the car ends up mangled through someone else’s wreck. That wasn’t the case on Sunday, which emphasized how nice this design looks. It’s simple and functional, yet implies a sense of danger and intimidation while remaining stealthy and cool. If superheroes drove race cars, this would be the machine the Arrow would pilot.

There will be no Cup race next weekend because of Father’s Day (enjoy the day, dads!), so no one will be able to lock themselves into the Cup playoffs. But the XFINITY Series (5 p.m. ET on June 17, TV coverage on FS1) and Camping World Truck Series (7 p.m. ET on June 16, FS1) both get time in the spotlight at Iowa Speedway with the Iowa 250 presented by Energen (NXS) and M&M’s 200 presented by Casey’s General Store (CWTS).

John Hunter Nemechek will get his first XFINITY win in the Ganassi No. 42, and Todd Gilliland parks his Kyle Busch Motorsports truck in Victory Lane for the first time.

The MENCS returns to action in two weeks for the Toyota/Save Mart 350 in Sonoma (3 p.m. ET on June 24, FS1), where Kurt Busch has a really good shot at getting his first victory of 2018.

I guess we can assume since it was a bad day for the Toyotas and Kyle Busch started the race 39th, he must be the best driver in the sport to have finished 4th with no straightaway speed and no funky pit strategy.

He’ll tell you he’s the best driver in the sport…ever!