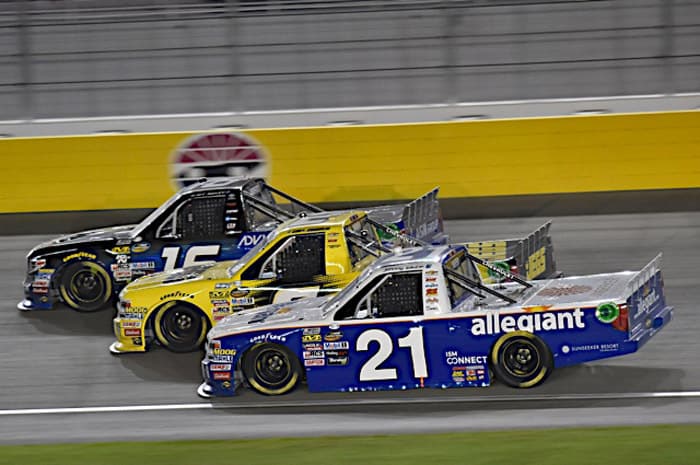 Last Friday night’s race at Texas Motor Speedway marked the eighth on the schedule, which also makes it the halfway point of the regular season. With only eight more races to set this year’s playoff field, the championship picture is about as murky as it can be, aside from Johnny Sauter asserting himself as the clear favorite to win the title.

The driver of the No. 21 Chevrolet scored his series-leading fourth win at the mile-and-a-half oval, and now holds a whopping 77-point advantage in the standings over Noah Gragson. As the lone driver with multiple wins this season, Sauter is the only one guaranteed his spot in the playoffs at this point.

While he stopped short of guaranteeing himself a spot in the Championship 4 during his post-race media availability last weekend at Texas, he has enough playoff points (22) to help minimize the blow if he happens to have a poor finish during those final seven races. But the reality is that Sauter is having a career year. He’s already matched his 2017 victory count and has finished outside the top five just once (19th at Martinsville). It’s not even close to time to engrave the championship trophy, but if the No. 21 team and GMS Racing, as a whole, can keep going, Sauter is going to be the driver to beat once the playoffs begin.

In all likelihood, there won’t be enough winners between now and the conclusion of the regular season at Bristol Motor Speedway in mid-August that Brett Moffitt and Gragson, each with one win apiece, will be in the playoffs as well.

For Gragson, the numbers aren’t quite as good, as he only has five top 10s. However what’s more telling is that the sophomore driver has led laps in all but one event this season, including a dominant run at Kansas Speedway last month where he stayed out front for 128 circuits en route to the win from the pole.

Meanwhile, Moffitt has had a string of bad luck plague him in recent weeks. After crashing out of the season-opener at Daytona International Speedway, the driver of the No. 16 Toyota scored the win at Atlanta Motor Speedway and put together a string of top-three finishes. But in the four races since the series returned from its five-week hiatus between Martinsville and Dover, Moffitt has finished inside the top 10 just once with a fourth at Charlotte Motor Speedway.

In each of the other three races, Moffitt has had some sort of an issue. At Dover, it was damage suffered in a first-lap incident involving Stewart Friesen that the driver somehow managed to salvage a 12th-place finish out of it, despite being one lap down, while at Kansas he struggled through voltage problems to finish 16th, four laps down. Meanwhile, Texas wasn’t too kind either as the No. 16 spun early and suffered left side damage, but the team battled through to bring home an 18th-place finish, nine laps off the pace.

But from there, things aren’t quite as clear. Grant Enfinger and Matt Crafton are both currently more than 60 points ahead of Dalton Sargeant, who sits ninth in the standings, and barring a string of horrible results, the pair of ThorSport Racing teammates should be safely in the playoffs as well. While both drivers have shown signs of life this season, neither has been much of a factor when it comes to competing for race wins. Crafton has led just 15 laps in eight races and holds an 11.5 average finish. By comparison, Enfinger hasn’t led a single circuit but has run more consistently, posting a 7.6 average finish.

With that said, Ben Rhodes, Friesen and Justin Haley, who sit sixth through eighth in the standings could be in danger if anyone not named Sauter can find Victory Lane over the next couple of races.

Though Rhodes has a 52-point cushion over ninth in the standings, his team has suffered multiple power issues with its Ilmor engines this season, and it bit the driver of the No. 41 Ford once again in Texas.

“We just can’t seem to keep the motors running – we’re not sure what side that is, we can’t figure out the issue,” Rhodes explained after the Texas race. “Sooner or later, we’ve got to figure it out because we’re losing too many points and too many wins. I think tonight, just like Atlanta and Kansas, we could’ve come home with the win.”

Meanwhile, Friesen can easily be considered the best driver in the series without a win to his name. Ever since his team, Halmar Friesen Racing, formed a technical alliance with GMS Racing last season, it’s appeared it’s only a matter of time before Friesen visits Victory Lane. After scoring his second career pole at Texas last weekend, the driver of the No. 52 Chevrolet walked away disappointed in a second-place finish, and when a driver is disappointed in a runner-up result, that certainly means things are going right for an organization.

Haley, currently holding down the eighth and final playoff spot, finds himself in the most precarious position of the of the top eight. After all, one more win by a Truck Series regular suddenly puts him on the outside looking in at a playoff berth.

With eight races remaining on the schedule, several of the above drivers can visit Victory Lane, which would change quite a bit in the playoff standings. It’s not unreasonable to expect Crafton, Rhodes and Friesen to win at some point soon.

And that doesn’t even consider a driver like Todd Gilliland, who just turned 18 less than a month ago and missed multiple races because he wasn’t old enough to run. The good news for Gilliland is that NASCAR already granted him a waiver to participate in the playoffs if he can make it into the field, and the reality is that he’ll need a trip to Victory Lane to secure a playoff berth in his rookie season.

The regular season may already be half over, but the fun is only just beginning as the series works its way toward the championship battle. As of right now, it appears the field is chasing Sauter and his GMS Racing team, but the season is far from over.

Better bring your ? to @iowaspeedway! @Brett_Moffitt will carry the bright colors of S.M.A.R.T. Series by Destiny Homes in the #MMs200 on Saturday night. #NASCAR pic.twitter.com/5LfMDCNzSk