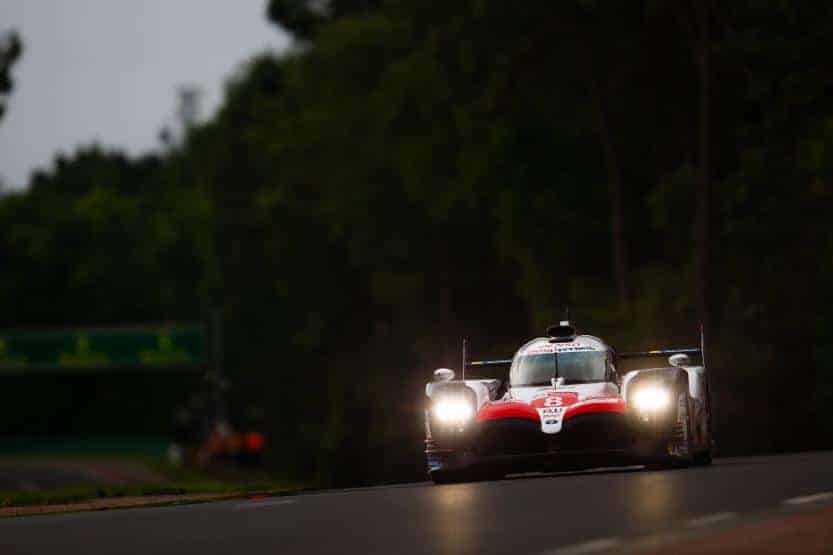 Toyota GAZOO Racing’s Kazuki Nakajima technically didn’t need to improve his time from Wednesday night to claim the overall pole for this weekend’s 24 Hours of Le Mans as no one beat it all day Thursday.  However, he did it anyway.  Nakajima turned in a lap at 156.012 mph early in Qualifying Practice No. 3 Thursday night to win the overall pole.  Nakajima will share his pole-winning Toyota with Fernando Alonso and Sébastien Buemi.

LMP2 will see IDEC Sport’s No. 48 ORECA 07-Gibson of Paul-Loup Chatin, Paul Lafargue and Memo Rojas start from the pole with a lap of 148.803 mph, but not without controversy (see below).  DragonSpeed’s No. 31 ORECA 07 for Nathanaël Berthon, Roberto Gonzalez and Pastor Maldonado will start second, followed by G-Drive Racing’s No. 26 for Andrea Pizzitola, Roman Rusinov and Jean-Eric Vergne.  TDS Racing’s No. 28 for Loïc Duval, François Perrodo and Matthieu Vaxivière will start a disappointing fourth, while Panis Barthez Competition’s No. 23 Ligier JS P217-Gibson of Timothé Buret, Julien Canal and Will Stevens will start fifth in class.

In GTE-Pro, no one could touch Gianmaria Bruni‘s quick time from Wednesday night.  Bruni’s lap at 133.981 mph was nearly two full seconds faster than anyone managed on Thursday and puts the Rothmans-themed Porsche shared by Bruni, Richard Lietz and Frédéric Makowiecki on pole.  The No. 92 Porsche of Michael Christensen, Kevin Estre and Laurens Vanthoor will start second, followed by Ford Chip Ganassi Racing WEC’s No. 66 for Billy Johnson, Stefan Mücke and Olivier Pla.  AF Corse’s No. 51 Ferrari for James Calado, Alessandro Pier Guidi and Daniel Serra moved up to the fourth spot in class Thursday, while Ford Chip Ganassi Racing IMSA’s No. 68 for Sébastien Bourdais, Joey Hand and Dirk Müller will start fifth.

Qualifying Practice No. 2 did not see any of the class leaders improve their times.  Others were able to move up the order a little, most notably the two Ginettas that struggled mightily on Wednesday.

However, the session did have wrecks.  A number of them.

In the opening minutes,’ Porsche GT Team’s Sven Müller spun coming into Indianapolis and socked the tire barriers.  Müller was ok, but done for the session.

A few minutes later, Ford Chip Ganassi Racing WEC’s Harry Tincknell clipped the grass on the run to Tertre Rouge.  The Ford GT swapped ends, slid through the gravel trap and backed into the tire wall.

[REPLAY] the #67 @FordPerformance out of the track at Tertre Rouge. ?#LeMans24 #WEC pic.twitter.com/nNHTLRo5nt

The crash ultimately brought out the first red flag of the session for cleanup.  Tincknell was able to drive away, but lost his rear wing in the process.  The team made repairs to the No. 67 back in the garage and managed to return to the track later on.

The session ended 38 minutes early when Cetilar Villorba Corse’s Giorgio Sernagiotto crashed hard at the entrance to the first chicane on the Mulsanne Straight.  Unfortunately, the crash was not caught on video.  Luckily, Sernagiotto walked away from the crash.  The team’s Dallara P217 was not so well off.  At bare minimum, the crash ended the day for the No. 47 Dallara.

During the session, Alonso was fastest overall in the No. 8 Toyota with a lap at 153.929 mph, roughly eight-tenths of a second slower than Nakajima’s best time from Wednesday night.  Alonso was more than 1.8 seconds faster than López in the No. 7 Toyota.  REBELLION Racing’s Laurent was third quickest, nearly four seconds back, followed by SMP Racing’s Mikhail Aleshin.  Lotterer in the No. 1 REBELLION R13 was fifth.

In LMP2, TDS Racing’s Vaxivière was quickest with a lap of 148.478 mph, good enough for eighth overall.  GRAFF-SO24’s Tristan Gommendy was second, followed by the GRAFF Racing-entered G-Drive Racing No. 40 of Enzo Guibbert.  TDS Racing’s G-Drive entry for Pizzitola was fourth.  Panis Barthez Competition’s Stevens was the fastest non-ORECA 07 in fifth.

GTE-Pro was cut down a little due to the on-track incidents, but Porsche still flexed their muscle.  Patrick Pilet led a Porsche 1-2-3 in the session with a lap at 132,746 mph.  Estre was second in the “Pig car,” followed by Lietz in the No. 91.  Ryan Briscoe was fourth in the No. 69 Ford GT, while AF Corse’s Toni Vilander was fifth.

Spirit of Race’s Fisichella was fastest in GTE-Am with a lap at 131.409 mph, good enough for fourth among all GTE contenders.  Fisichella was nearly a second and a half faster than JMW Motorsport’s Jeff Segal.  Proton Competition’s Patrick Long was third fastest in the No. 99 Porsche, followed by Clearwater Racing’s Matt Griffin.  Ebimotors’ Fabio Babini was fifth.

Rain had been in the forecast for Thursday night all week, and sure enough, it arrived in the second half of the session.  As a result, everyone had to get their licks in early.  Nakajima turned in his pole-winning lap on his very first timed lap out of the pits, just seven minutes into the session.

In LMP2, controversy reigned.  TDS Racing’s Duval actually turned in the fastest LMP2 lap of the weekend (148.822 mph) during the session.  Unfortunately, he missed a weight check shortly afterwards.  Duval (along with four other drivers who committed the same offense) was fined 1000 Euros and had his laps to that point in the session deleted.  That included what would have been the pole-winning time.

Duval’s penalty ultimately allowed IDEC Sport’s Chatin to retain his class pole.  On Thursday, Chatin improved his speed to an average of 148.803 mph to claim the LMP2 pole.  Chatin was four-hundredths of a second faster than DragonSpeed’s Berthon.  G-Drive Racing’s No. 26 for Vergne was third, followed by Stevens.  Jackie Chan DC Racing’s Ho-Pin Tung was fifth quickest, despite teammate Stéphane Richelmi spinning into the gravel early on.

GTE-Pro saw AF Corse’s Pier Guidi top the charts with a lap at 132.819 mph.  The lap was one-tenth of a second faster than Pilet in second.  Ford Chip Ganassi Racing IMSA’s Richard Westbrook was third, followed by Makowiecki in the No. 91 Porsche and Mücke in the No. 66 Ford.

Friday is an off-day for the 60 teams present in terms of on-track activity.  For teams such as Cetilar Villorba Corse, it will be a repair day.  Saturday is race day in Le Mans.  Rafael Nadal is scheduled to drop the French Tricolour at 9 a.m. EDT Saturday morning.  Flag-to-flag coverage of the race begins at 8 a.m. Saturday on Velocity and will continue right through post-race.