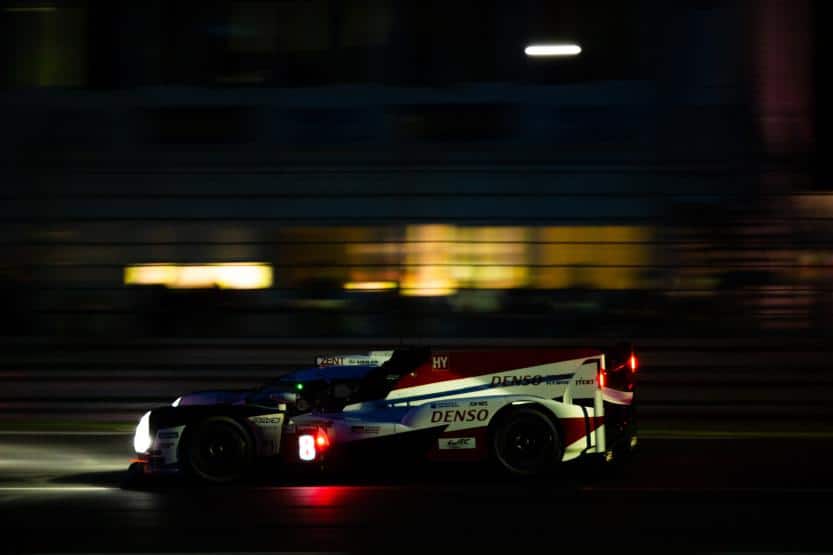 Toyota GAZOO Racing’s Kazuki Nakajima was fastest overall during the first two-hour qualifying practice session held on Wednesday.  Nakajima’s lap of 154.515 mph was a tenth of a second faster than Kamui Kobayashi in the No. 7 Toyota.

The time set by Nakajima is considered to be a track record, even though it is slower than last year’s pole time by multiple seconds.  The reasoning here is that there have been track renovations in the past year at the Circuit de la Sarthe.  The track length has actually been shortened by three meters.  In the eyes of the FIA and the ACO, it is considered to be a “new track.”  As a result, the previous records have been thrown out.

In LMP2, IDEC Sport’s No. 48 ORECA 07-Gibson had been the fastest car in class all day.  When the time came to produce, they laid it on the line.  Paul-Loup Chatin turned in a lap at 148.721 mph to claim provisional pole in the LMP2 class.  The lap was actually four-tenths of a second faster than the 2017 LMP2 pole and good enough for ninth overall.

Once again, the ORECA 07 chassis dominated the proceedings.  The top five cars (including Lapierre’s Alpine A470) are ORECA 07s.  The fastest non-ORECA 07 was the No. 22 United Autosports Ligier JS P217-Gibson of IMSA WeatherTech SportsCar Championship Prototype co-points leader Filipe Albuquerque in sixth.

In GTE-Pro, the Porsche GT Team dominated the day.  The team went 1-2-3 in Free Practice early in the day.  Qualifying wasn’t impressive, but they did take the top two places in class.  Gianmaria Bruni put the No. 91 Porsche 911 RSR on pole with a lap right at the beginning of the session at 133.981 mph, good enough for 31st overall.

Bruni’s lap was considered so good that it was the only lap at speed the No. 91 set in the session.  And for good reason.  Bruni’s lap ended up nearly 1.6 seconds faster than anyone else in GTE-Pro.  Second was Michael Christensen in the No. 92 Porsche, sporting a paint scheme reminiscent of “The Pig,” the No. 23 Porsche 917/20 that raced at Le Mans in 1971.

GTE-Am saw Dempsey Proton Racing’s Matteo Cairoli once again show his speed, taking the class pole with a lap of 132.109 mph.  This was good enough for 43rd overall and 13th of all GTE entries.

Both sessions will be streamed live at MotorTrend.com.  Coverage of Qualifying Practice No. 2 will begin at 12:45 p.m. EDT, while coverage of the final practice will begin at 3:45.