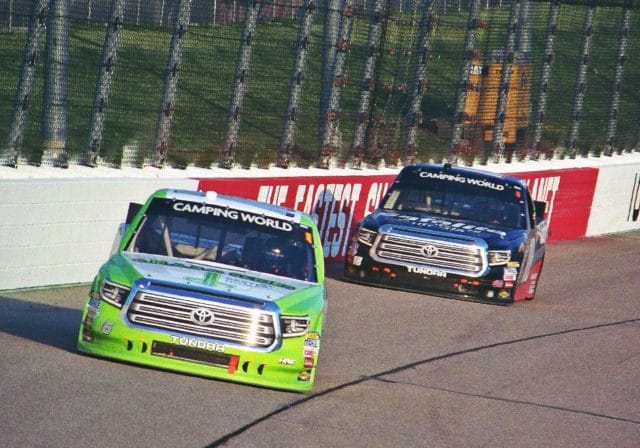 When you enter the Iowa Speedway from the tunnel in Turns 3 and 4, you’ll find two rows of corn and a sign that states “Infield of Dreams.” That saying hasn’t been any truer than in the last two NASCAR Camping World Truck Series events at Iowa.

Last season, John Hunter Nemechek entered this race in a somewhat similar scenario to what Brett Moffitt did Saturday night (June 16). A combination of lack of funding, an uncertain future and many other complications just weren’t going to hinder Moffitt’s return home.

Moffitt took the lead from Stewart Friesen on lap 125 and as the laps continued to count down, the speedway’s crowd was on the edge of their seats. This may have been due to the fact that Iowa-born driver Moffitt was leading or the fact that Noah Gragson was practically breathing down his neck. Maybe both.

Gragson made a “winning move” as he denoted in the post-race press conference, but it was too little too late. Moffitt would cross the finish line earning his third-career victory in the Camping World Truck Series and second of 2018.

GRAGSON GOES FOR IT!!

The real turning point of the race came on lap 137 when Matt Crafton blew a tire. His No. 88 went up the track collecting Nemechek, Ben Rhodes, and Friesen. Three of those four drivers had led a combined 83 laps before the accident, and though Friesen would salvage a ninth-place finish, Rhodes would only manage 17th while Nemechek and Crafton’s nights were over, resulting in 27th- and 26th-place finishes, respectively.

Sauter retains the points lead while Gragson and Moffitt are both locked into the playoffs with one win apiece. Grant Enfinger is the highest driver without a win in points and is currently 63 points above the cutoff line with seven races left in the regular season. Crafton currently has a 60-point cushion.

The next NASCAR Camping World Truck Series race is June 23 at Gateway Motorsports Park. The Villa Lighting delivers the Eaton 200 presented by CK Power begins at 8:30 p.m. ET. TV coverage will be on FS1, while radio coverage will broadcast on MRN and SiriusXM NASCAR Radio (Channel 90).