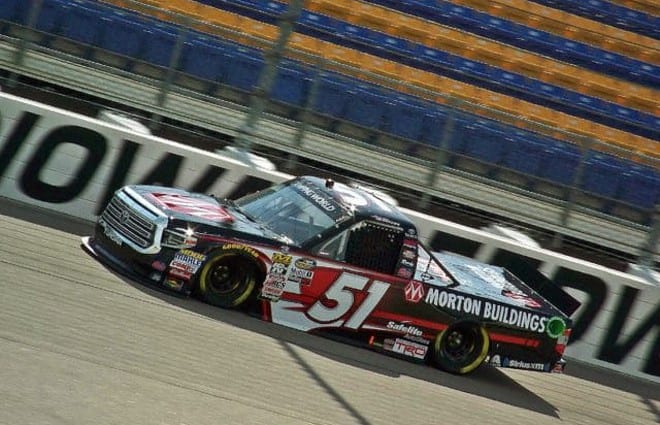 Harrison Burton makes his 10th career start Saturday, and he will start from the pole position.

The 17-year-old earned his first-career pole in the NASCAR Camping World Truck Series, turning a 132.850-mph lap around Iowa Speedway during the third round of qualifying to put a lock on the pole. Noah Gragson, the defending pole winner, qualified second while Brett Moffitt qualified third. Grant Enfinger and Stewart Friesen round out the top five.

Christian Koelle returns to Frontstretch in 2020 as the photo editor at Frontstretch. He will continue to contribute content in the ARCA Menards Series, Sioux Chief Challenge, and ARCA East & West Series. He is also engaged and will be getting married during the 2020 NASCAR off-season. His favorite tracks on the circuit include Barber Motorsports Park, Iowa Speedway, Martinsville Speedway, Talladega Superspeedway, Fairgrounds Speedway Nashville, and Bristol Motor Speedway. During the season, Christian also spends time as a photographer with multiple other outlets shooting Monster Energy AMA Supercross, Minor League & Major League Baseball, and NCAA Football.
@KoelleChristian
Previous Tech Talk: Revisiting NASCAR Aero, Engines and New Rules with Justin Alexander
Next Christopher Bell and Kaz Grala Lead XFINITY Practices at Iowa