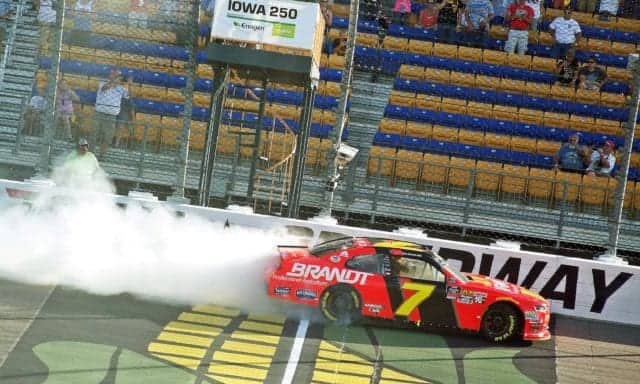 Justin Allgaier was a part of the first NASCAR XFINITY Series event at Iowa Speedway in August 2009. But up until now, the 10th year of XFINITY racing there, he had never won at the short track.

That changed Sunday (June 17) as Allgaier led 182 of 250 laps to earn his first Iowa victory. Though he had to battle Christopher Bell toward the latter part of the race, Allgaier ultimately prevailed. It was the veteran’s seventh career victory and second of 2018.

RT TO CONGRATULATE JUSTIN ALLGAIER ON HIS WIN AT IOWA! pic.twitter.com/kFoWJp8JbK

Bell, who started the race from the 39th position, finished the race in second. Daniel Hemric, Cole Custer and Brandon Jones rounded out the top five.

“We’re in the middle of a cornfield, how can you not enjoy this?” Allgaier said afterwards. “Man, is it cool to win one, especially at Iowa.”

Before Allgaier took control of the race, Austin Cindric took charge early. The No. 22 Ford started the race from the pole and dominated the first stage.

However, the rookie came up short of stage victory after Allgaier made a daring, three-wide move on the No. 22. Lapped traffic provided that opportunity for the No. 7 to take the lead with just two laps left. Allgaier then went on to sweep all three stages while Cindric never recovered; he wound up 11th.

Once Allgaier took the lead from Cindric, he established himself as the class of the field. Allgaier and Hemric battled back-and-forth for the lead in stage two; even Custer put his name in the hat on lap 125 after winning the race off pit road following stage two’s break. Both Hemric and Custer stepped up lead a lap or two but were ultimately turned away.

Bell and Allgaier had a hot-and-heavy battle up front throughout the final 120 laps. Along with battling each other, often side by side, Allgaier also had to maneuver around lapped cars. When the caution came out on lap 200 for rookie Chad Finchum‘s crash, Bell was in position to complete the pass.

“I feel like we were better than the No. 7 all day, just couldn’t pass him,” Bell said. “Pretty hard to pass a car that’s really good like that. One time, I did get alongside of him in lapped traffic there and then the yellow came out.”

He wouldn’t quite get that close again. Custer’s crew got him out first after a round of stops but again, Allgaier took the lead back and reassumed control. He earned his second victory of the 2018 season, and this time, it counts. NASCAR announced that no cars will be sent back to the R&D center for further inspection. Of course, Allgaier earned the victory at Dover in May but after a part failure was found on the car, NASCAR took the victory and some cash from JR Motorsports.

Point leader Elliott Sadler hit the wall early and struggled through the race. His 28th-place result, 11 laps down cut his points lead to just four over Custer.

Sunday’s Iowa 250 presented by Enogen was the final XFINITY Series race of the season that will be broadcast on FOX. NBC takes the reins to cap off the season, covering the final 19 events. The series itself takes the weekend off before returning at Chicagoland Speedway on Saturday, June 30 with the Overton’s 300.

Allgaier is the defending race winner of that event and will look to earn his third victory of the season.

Great Race! Why? NOT A CUP DRIVER IN SIGHT !!! Keep the Cup drivers out of the Xfinity Series races!!