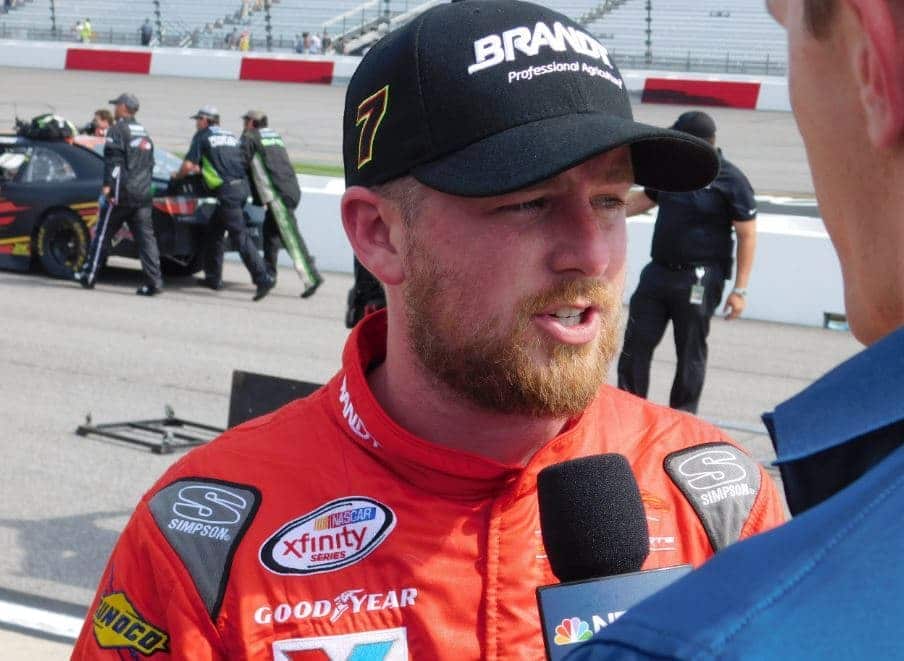 Lapped traffic is a constant presence at most short tracks and the 7/8-mile speedway at Iowa is no exception. On Sunday (June 17), winner Justin Allagier had lapped traffic to thank for his trip to the front.

But he also nearly had it to blame for his defeat in a highly competitive Iowa 250.

Let’s start with the good. With only two laps left in stage one, leader Austin Cindric was struggling to lap the cars of Alex Labbe and Joey Gase.  Labbe in particular slowed Cindric up off turn 4 and it provided an opportunity for the hard-charging Allgaier to pull through.

Wow! What a pass by Allgaier for the race lead, squeezing between Cindric and a slower car.

The three-abreast move thrust Allgaier ahead, costing Cindric momentum and pushing Labbe back behind Gase for the free pass slot. From there, the No. 7 JR Motorsports Chevrolet would go on to lead 182 of the final 192 laps of the race.

But it’s not as if Allgaier pulled away. Christopher Bell, after a hard-charging effort from the rear of the field had his rival within striking distance from the start of stage three. Lap after lap, the duo dueled side by side with Bell sneaking just ahead of Allgaier at the line twice. The two never felt separated by more than half a second as the laps wound down with both cars pulling away from all competitors.

With these drivers running the same speed in clean air, that’s when lapped cars came into play again. Some heavy traffic gave Bell a chance to close in, finally dipping to the inside of Allgaier with a chance to fully complete the pass.

But then? The caution came out for rookie Chad Finchum scraping the outside wall in turn 1. Opportunity lost… and never regained despite several quality chances late.

“I feel like we were better than the No. 7 all day, just couldn’t pass him,” Bell said. “Pretty hard to pass a car that’s really good like that. One time, I did get alongside of him in lapped traffic there and then the yellow came out.”

It was the ability of those lapped cars to hold up the leaders which almost led to Allgaier’s demise. But despite the aggression those drivers showed, Sunday’s race winner welcomed the additional wrinkle they gave to the event.

“I feel like it was a lot easier to be the chaser than the chasee,” Allgaier said. “We saw on lapped traffic, when your car is not handling well it’s really easy to move up to the top than to take the lane that probably has the most grip at that moment.

“There were certain guys today that pushed really hard. And I understand that; nobody wants to go a lap down or be in that situation. But there were certain times where it got extremely difficult. Because again, the speeds they were running, the guys that were being lapped weren’t running that much slower at the end of a run than what we were in our cars. That goes back to the parity side of it. The field is definitely a lot closer. I think at the beginning of the run we were making up a lot of ground on them but then by the end, everyone is kind of running the same speed.”

That parity showed in the final results as 18 cars wound up on the lead lap. It’s an impressive number considering the race had only five cautions. Three portions of the race featured green-flag runs of over 50 laps.

“Obviously, we came out on the good end of it, but it was definitely a fun day.”