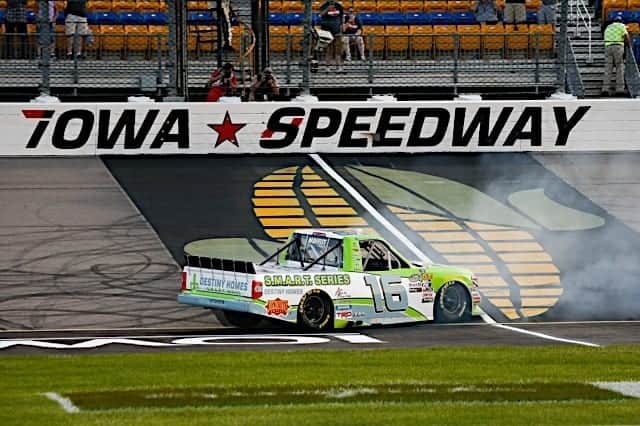 In a Nutshell: After adding new sponsorship this week in Destiny Homes, Brett Moffitt made his second 2018 trip to NASCAR Camping World Truck Series Victory Lane when he took the checkered flag 0.333 seconds ahead of Noah Gragson to win the M&M’s 200 at Iowa Speedway Saturday night. Moffitt outlasted a last-lap slide job that didn’t work out for Gragson to grab his third career win and his first at his home track. Polesitter Harrison Burton, David Gilliland and Johnny Sauter rounded out the top five.

Jesse Little notched his third top 10 in four races this season with a sixth-place finish, followed by Cody Coughlin, who continues to show marked improvement over his 2017 performance, in seventh. Debuting driver Christian Eckes wound up eighth, while Stewart Friesen recovered from crash damage to finish ninth. Myatt Snider rounded out the top 10.

Just woke up.. still smelling like champagne, my forehead has its own pulse, and I ain’t even mad about it #winning #beerme https://t.co/uRsMCPOquB

Who Should Have Won: During the first two stages, Burton, Matt Crafton, John Hunter Nemechek and Friesen all managed to lead double-digit laps but none of those four drivers truly dominated. Enter Moffitt during Stage 3, who led a race-high 76 of 200 laps after starting 16th. And in the end, the fastest truck won, despite a last-lap charge by Gragson.

Earlier this season, Kyle Busch Motorsports announced 17-year-old Eckes would make his series debut at Iowa Speedway behind the wheel of the No. 46 Toyota. After running inside the top 10 in the pair of practice sessions, Eckes was ninth-quickest in qualifying. He dropped back on the green flag and was just outside the top 10 when the first caution flew for teammate Todd Gilliland.

On the restart that followed, Eckes found himself in a four-wide battle that didn’t end well.

More trouble for @KBMteam; this time it's the 46 of @christianeckes going around on the restart. #MMs200 pic.twitter.com/FhPOeG4rFH

But the damage to the No. 46 Toyota was minor and Eckes was able to continue. After restarting 21st following the incident, he quickly rebounded to inside the top 15. And by the time the checkered flag flew, Eckes emerged with an eighth-place finish in his series debut.

“It started out a little rough,” Eckes said. “Not sure what happened on the backstretch there but we got in a wreck and had to fight back all day. Everybody on this No. 46 Mobil 1 team did a great job today getting me where I needed to be. Unfortunately, it wasn’t the finish that I really wanted at the end but a top-10 finish in my debut is definitely a positive.”

Even with the minor damage to his truck, Eckes still recovered to score a top-10 finish in a race that can only be described as chaotic at times. But perhaps what’s more important is that he’ll be right back in the truck next weekend at Gateway Motorsports Park, which allows him the chance to build on the experience he gained Saturday night in Iowa.

While it’s still too early to determine just how much success the 17-year-old could potentially have in NASCAR, one thing that is certain is that backing from KBM means potential and talent are there. It’s just a matter of executing and making the most of the opportunity he currently has.

The 7/8th-mile track at Iowa has long been known for its competitive three- and sometimes four-wide racing, and it didn’t disappoint in Saturday night’s visit either. Every restart – and even the green-flag runs – featured multiple side-by-side battles throughout the race.

Not long after the third stage began, Friesen, Crafton and Ben Rhodes found themselves in a three-wide battle for seventh, and Friesen and Crafton made contact, causing a tire rub on the left front of the No. 88 Ford.

Contact! @StewartFriesen and @Matt_Crafton come together while battling for 7th. Tire rub on the 88. pic.twitter.com/MBBWLpscWj

A handful of laps later, that tire let go and Crafton slid up the track, clipping Nemechek, Dalton Sargeant, Rhodes and Friesen. Nemechek and Crafton were out on the spot while Rhodes, Sargeant and Friesen were able to continue. The latter recovered to a ninth-place finish, however, Rhodes and Sargeant ended 17th and 19th, respectively.

Essentially, that wreck took Crafton, Nemechek and Friesen out of contention for the win, and all three were listed as potential front-runners with a shot at Victory Lane.

Just five laps after the third and final stage began at Iowa Speedway, eventual winner Moffitt took the lead, pulling out to a nearly two-second advantage. But as the laps ticked away, KBM teammates Gragson and Burton tried to make the finish interesting and tracked down the leader. The three were separated by less than a half-second as they took the white flag.

Going into Turn 3, Gragson, who already has a win at Kansas this year, made an aggressive move to pull inside Moffitt and slid up the track to take the lead, but when that slide kept going, he bounced off of the outside wall in Turn 4, relegating him to a second-place finish.

“We were so close to getting the win there. Just so much fun racing at this track,” Gragson explained. “I drove in there, I knew I had him so I tried to do a video game like I play with my buddies – and I just overshot a little bit, committed to the gas and I hit the fence. Sorry to my guys at Kyle Busch Motorsports who build really fast Toyota Tundras.

“I want to say congrats to Brett Moffitt. I appreciate him running me clean. This track, Iowa Speedway, is the best race track on the circuit. I wish we could come here two, three, maybe five times a year. I don’t know. I’m okay with finishing second. We put up a fight. From where we were when we started the race to where we are now I’m really pumped up. So much fun.

“Video game-like racing here, that’s what Iowa puts off and it was so much fun. I have a smile on my face and normally I’m not very happy when I finish second, but I finished second and got a smile on my face so it can’t be that bad.”

Despite the outcome, you have to admire Gragson’s courage to make that move, knowing it likely wouldn’t stick as he entered Turn 3. With a win to his credit already, the 19-year-old went for the victory, and the move may have worked if he’d had a few more feet of racetrack to slide up on. And the bonus for Gragson? He still managed to pull out a runner-up finish, even with the wall contact.

Tough day @iowaspeedway got loose and backed it in the fence running third. Just clicking laps off with the damaged truck and blew a RF tire. Another fast @JBLaudio @ToyotaRacing tundra today.

“It could’ve been better obviously. We had a great Morton Buildings Tundra and I made a mistake and didn’t know how to reset the truck once it was turned off, the ECU — the computer,” Burton explained. “I’m trying to get used to it, trying to learn as much as I can. I just made a mistake, but had a lot of fun racing out here. It was cool to run up on the top and on the bottom. What a race for the fans. It was awesome. Noah (Gragson) just drove it off in there and it reminded me of Carl Edwards back in the day a long time ago. That was cool. I was hoping they (Gragson and Moffitt) were going to get into it and I could sneak by, but it just wasn’t our day. We’ll move on and get better and win the next one.”

Great run for my @CarolinaNutCo @LA_Hot_Sauce @FordPerformance @ThorSportRacing guys. We weren't fast on tires. But were the fastest truck on old tires. Sadly ended P10 from a blistered RF. But kudos to @GoodyearRacing for bringing tires that put up with our speed for so long! ?

Points Update: Sauter remains as the point leader by 71 markers over Gragson. Race winner Moffitt sits third, 85 points behind Sauter. Friesen and Grant Enfinger are tied to round out the top five. Crafton is sixth in the standings, followed by teammate Rhodes. Haley, Snider and Sargeant round out the top 10.

Dad we did it!!!! Happy Father’s Day!! pic.twitter.com/6lGqbVUP6F

I tried?? so much fun! Thanks @iowaspeedway! Best track in @nascar! Also big thanks to @safelite and Toyota for the opportunity! Such a privilege!

Wish we raced at @iowaspeedway more! Holy crap what a show

What a battle. Everyone did their jobs. Stayed out of trouble. Pit stops were badass. Good adjustments by @Matt_Noyce. We will work hard at getting better so we don’t start so far behind. Proud of this team. Preparation for for @GatewayMSP starts now!! Thanks for all the support!

P8 in my debut. Decent finish but I have some work to do for Gateway next week. Big thanks to @Mobil1 and @KBMteam for letting me come run this weekend! Excited for the next one.

Up Next: The Camping World Truck Series heads to Gateway Motorsports Park next Saturday night. Coverage for the Villa Lighting delivers the Eaton 200 presented by CK Power begins at 8:30 p.m. ET on FOX Sports 1; the race can also be heard on your local MRN affiliate or SiriusXM NASCAR Channel 90.