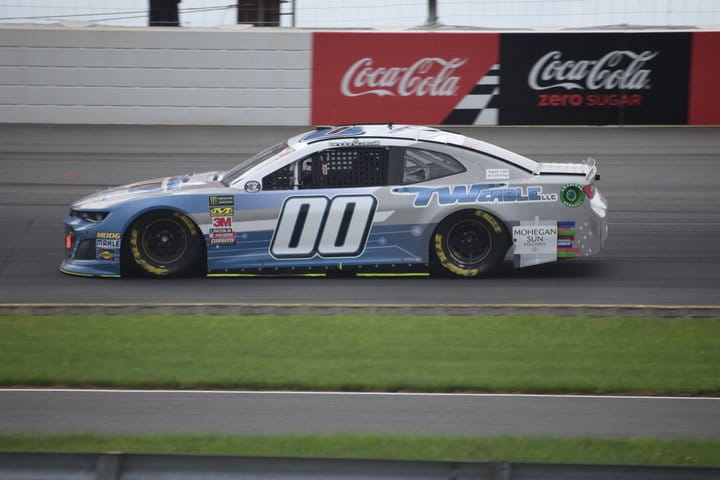 Landon Cassill may only be 28 years old, but 2018 is his ninth year competing in the Monster Energy NASCAR Cup Series.  Through Michigan, Cassill has made 268 career MENCS starts, the vast majority of which were for small operations.  As a result of underfunded equipment, he has only one career top-10 finish.  That was a fourth-place run at Talladega in 2014.

Last year, Cassill was full-time in Front Row Motorsports’ No. 34 Ford, where he struggled at times, his best finish of the year ended up being a 16th in the Daytona 500.  Six DNFs and a series of mediocre performances resulted in Cassill winding up 31st in points at the end of the season.

Cassill was then released from FRM and left to fend for himself.  He stated up front he was not picky on where he would drive.  Rides in any one of the three national series were palatable to him.  Unfortunately, the phone did not ring with the right opportunity before February, resulting in Cassill starting the year on the bench.

A few weeks in, a lifeline was thrown to him by StarCom Racing, a new organization that launched late last season.  Cassill joined the team at Martinsville and has made nine starts since then, posting a best finish of 20th at Bristol.

A couple of hours prior to the Pocono 400 at Pocono Raceway, Cassill sat down with our own Phil Allaway to talk about the season, StarCom Racing and how he thinks the team has progressed.

Phil Allaway, Frontstretch.com: How did this opportunity come together for you?

Landon Cassill, No. 00 TW Cable/StarCom Fiber Chevrolet: The Copes run this team for StarCom Fiber and StarCom Racing.  They reached out to me when they were in need of a driver.  That’s sort of where the dialogue started.  Since then, I’ve gotten to know the owners and the whole team.  I feel like it’s a pretty good relationship.  But, it all started with the Copes.

Allaway: What’s the chemistry like with the team at this point?

Cassill: Sometimes, the chemistry is scratching to get cars put together.  Derrike and I get along pretty well.  I appreciate his involvement with the team and the way that he leads it.  We just gotta keep grinding away as a group and work on these cars to get them better.

Allaway: How would you describe Derrike Cope’s leadership style?

Allaway: When you came into the team, what were your goals? Have you been able to approach them?

Cassill: I think the goal is to establish what the team needs in order to perform better and get the cars running better.  I think we’ve been inching our way down that path.  The results on track have definitely improved.  We’ve had good finishes.  We haven’t torn up any race cars, so we’ve been able to work on our cars and keep our best piece out on the racetrack.

From here, we need to continue to get our setups dialed to where we come to the track not chasing [the setup].  Instead, we [would be] making changes to improve performance.

Allaway: You’ve had a few races running a second team.  Having that second car, does that help you get a little closer to that setup, or does it stretch things a little?

Cassill: It honestly can do both.  It’s a challenge for small teams to run two cars, but sometimes it makes sense for them to do it.  That’s why they do it.

It does afford us the opportunity to try a different package.  The package in the No. 99 car is completely different from what mine has.  I’ve driven both of them and have been able to give feedback on both of them.  At home, we’ll be able to diagnose and download the information.  From there, we’ll figure out what direction we want to go.  It can definitely help in that way.

Allaway: What is your ongoing schedule with the team?  Are you going to stay for the rest of the year?

Cassill: We haven’t established that yet, but it is likely.  I’ve been talking to them a lot and we have a lot of good chemistry right now.  I don’t really have any plans to go anywhere else.  You’ll probably see me in [the No. 00] for a number of races.

Allaway: During your time with StarCom Racing, how do you think the team has improved?

Cassill: I think we’ve been able to figure out what we have in terms of chassis, front suspension and how we’re preparing the car.  That’s probably the biggest step that we’ve made.

When I came to the team seven or eight weeks ago, we just had four or five different race cars and they were all different.  We’ve been able to get them a lot closer to each other.  From there, we’re tuning in what the best packages to run are front-end and suspension-wise.  I feel like we’re a step closer every week to that, and that we might have a few more changes that we need to make to get to the point where it’s something we’re really happy with.  But, we’re closer to there than we were.

Allaway: These cars that the team had.  Did they come from different sources and that’s why they were so different?

There were a few kinds of chassis in there.  On one hand, [the team’s] just trying to get them ready to race and get cars on the racetrack.  Then, once you get to that point, you’re not fixing things or fixing crashed cars. You can start fixing them to be more like each other.

Allaway: You’ve had a number of rides with smaller teams in your career.  What sets this team apart from the others?

Cassill: You have a group of owners that are new to the sport.  I drove for Phoenix Racing, which was owned by James Finch and Hillman Racing with Mike Hillman Sr.  Those are two guys that are very experienced owners, and in Hillman’s case, a very experienced crew chief; guys that had been here for a long time.

In this deal, you have a group of guys from StarCom [Fiber] that have a passion for racing, but they haven’t been around racing for a long time.  Their strategy is a little bit different than those guys.

[Finch and Hillman] are the kind of guys that are very hands-on with their teams, or crew chiefing their own cars, even.  These guys are more of a leadership-type, putting people in the right places and investing their money in the best way they can to build a sports franchise.

Allaway: This is a relatively small team that’s been around for less than a year.  How many employees does StarCom Racing have?

Allaway: What is the long-term plan for [StarCom Racing]?  Is it to expand to a certain degree?

Cassill: [StarCom Fiber] are in it for the long haul.  This isn’t just a one-year deal for them.  Their goal right now is to secure a charter.  Long-term, they have an agreement with RCR to use one of theirs (the No. 27 from last year).  That’s priority No. 1 for this team.

From that point, it would be getting the sponsorship money in order to compete at a higher level, hire more people in the engineering department and start building cars for optimum performance.  Hopefully, we can see some success that way.

Allaway: What are your goals for the rest of the 2018 season?

Cassill: At some point this year, I’d like to see a couple of more new cars come into the shop that have some good updates to them that are recent aerodynamic developments.  That would really expand our performance.

I wish we could hire some more engineering support so that I can give my crew chief [Tony Furr] some more tools to work with and make better, more informed decisions.  I think that is what it would take for the team to reach a higher level of performance.

Allaway: This year, a lot of the recent discussion has been about aero packages.  What do you think about the high drag package that has been used recently?  Does it benefit the sport?

Cassill: I think what I saw at the All-Star Race was a great benefit.  I thought it was good racing.

For these Cup cars, if we run it at Michigan, it would be a good race for sure.  I’m all for giving it a try.

Allaway: Are you going to be in the car for the road courses, or is there going to be a ringer-type situation?

Cassill: We haven’t figured that out yet, but obviously with the No. 99, we have the capability to run two cars.

Since this interview, Cassill and the No. 00 team have run two races.  At Pocono, the long green-flag runs kept the team back down the order.  However, Cassill kept the TW Cable Chevrolet clean and brought it home in 31st, three laps down without a scratch.

At Michigan, Cassill had a similar race, but a bit more competitive.  When the race was declared complete after 133 laps, Cassill was 32nd, one lap down.  Through 15 races, Cassill is currently 34th in the standings.

For Sonoma Raceway, the team has elected to put Tomy Drissi in the No. 00 Chevrolet with sponsorship from GoShare, an app that provides delivery services to businesses.  The company has sponsored Tanner Thorson in his races for Young’s Motorsports in the Camping World Truck Series this season in addition to Drissi’s efforts in Trans-Am.  Cassill should be back in the No. 00 for the Overton’s 400 at Chicagoland Speedway.