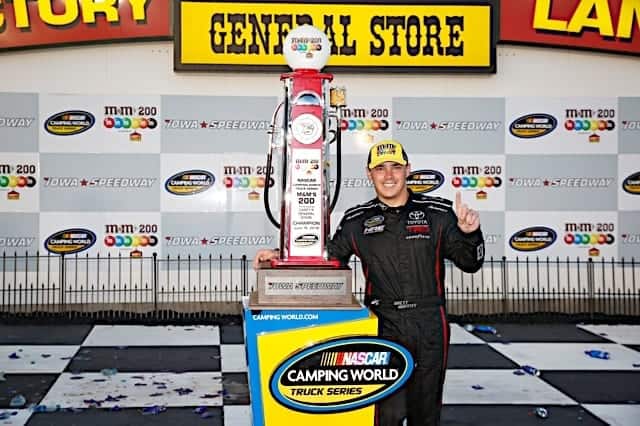 Any time XFINITY or Camping World Trucks have a non-companion race with the Monster Energy NASCAR Cup Series, it’s guaranteed to be a win for not only each series but their respective underdogs.

This past weekend had that and more as the Cup Series didn’t even race while XFINITY and Truck competed 24 hours apart at Iowa Speedway. This gave a few underdogs some well-earned time to soak up the spotlight.

Iowa is one of the sport’s most popular tracks and both races proved exactly why. Battles for the lead were about as common as a Morgan Shepherd DNF and the racing throughout the field seemed to never lack that close competition.

Slide jobs, over-unders and whatever you’d call Noah Gragson‘s last-lap move. Drivers showed their all and Iowa gave us its all on a weekend where it needed to.

Underdogs, too, rose to the occasion, placing multiple spots in the top 10, top five and even Victory Lane.

Starting with the Truck Series M&M’s 200, the top underdog of the race — and weekend — was Brett Moffitt and Hattori Racing Enterprises. The No. 16 Toyota took the lead with 76 laps to go and never relinquished it en route to scoring the win at his home track. The 25-year-old won for the second time of 2018, giving the small team their second win ever.

This begs the question of how they’re are not fully funded for the year. Sitting third in the championship, Moffitt and Hattori have been a weekly front runner in 2018, building off a strong-but-winless 2017 campaign with Ryan Truex. And though Moffitt spoke in Victory Lane, he was speaking to sponsors on FOX Sports 1.

It’d be a kick in the groin for the series to lose such a story: a foreign-owned team and an underdog driver for years. The two now together and kicking tail. Whether or not they can continue throughout the next few weeks is up in the air, however, Saturday’s victory showed they’re doing all they can to move the needle.

Another Trucker would did all he could was Jesse Little. His No. 97 Ford was again a top-10 contender and he gave his family team a third top 10 in four starts this year. A sixth-place run was the best of his Truck Series career and second straight top 10 at Iowa.

Completing the top underdogs from Trucks was again Stewart Friesen. The dirt tracker was looking to score his first win, taking the lead on lap 77 and holding it for 48 laps whilst winning Stage 2.

However, a crash with Matt Crafton and others with 63 laps to go spoiled that victory run and he continued on to finish ninth.

On to the XFINITY race; it was mostly a day of top teams up front: JR Motorsports and Team Penske, who led 240 of 250 laps. And the majority of the top 10 were also top teams, taking up nine of those spots.

That one leftover position was filled by Kaz Grala, who drove the breakout No. 61 Fury Race Cars Ford to another top 10 in 2018. In just four races together, Grala finished 10th twice, scored stage points, led laps at Michigan and overall earned more lead-lap finishes than in the prior 10 races combined. Talk about a hot start.

Starting with Trucks, Justin Fontaine is someone who shouldn’t really be in this category this weekend. Following back-to-back 30th-place finishes, a 12th place is nearly a win for Niece Motorsports. They started the year with two top 10s in the first three races, however, fell off through the spring with their rookie driver.

But Saturday was a good day for Fontaine and teammate Austin Wayne Self, who finished 15th. Good steps in a good direction.

In between the two Niece guys were two Young’s Motorsports guys: Austin Hill and Tanner Thorson. The latter made only his second Truck start while Hill continued his first full-time season in the No. 02. Double-top-15 finishes are good signs but for Hill especially, top 10s are surely on his hit list in his fifth year of Truck competition.

Wrapping up with XFINITY, Justin Haley scored a 12th-place run in his series debut for GMS Racing. The Truck Series talent was often seen in or around the 10th spot but fell a couple positions on the late restart.

Ryan Truex was more quiet than usual for Kaulig Racing in 14th while Ryan Sieg saw another top 20 in 17th. He was followed closely by Ross Chastain and Jeremy Clements 19th and 20th, respectively.

Some positive Monday morning stats for team 39. We have completed 99% of the laps this season (2541 out of a possible 2566 laps). Our worst finish in the last ten races is 21st. We gotta keep beating the cars we need to and the points will keep adding up ? pic.twitter.com/kEfQAXsvQZ

Heck of a way to end our 4 race stretch today with @FuryRaceCars!!! Missed it a hair for the start, but everyone worked so hard to dial the car in pretty close by the end! We fought our way into another top-10 finish… I REALLY hope I have good news to give y’all soon ????

I do love me some pizza! Thanks @caseysgenstore for bringing me some Saturday night! pic.twitter.com/Yb0ze1nGAK

that look in my face after this weekends double header @iowaspeedway ? pic.twitter.com/G8ffc8pXXH

Had fun tonight! Thanks to the entire @youngsmtrsports team for never giving up and pushing to get better all night. Made some more gains tonight and brought the @gosharedotco No. 20 home p13! pic.twitter.com/7ybR1QRBKT

With luck, the added publicity for these under funded teams will help them find funding to continue. Without any Cup drivers sucking up all the coverage, it was refreshing to learn more about the regulars on the circuit.

Saying those races were great is a typical FS knee-jerk reaction. I’m sure the FS writers who were assigned these races had their story lines written well before the races even started. Aero-push determined the winners, as it does everywhere NASCAR races, regardless of track length or configuration and regardless of whether Cup drivers were involved. Quality passes for the lead were rare to non-existent. And the fans voted by staying away. End of story.