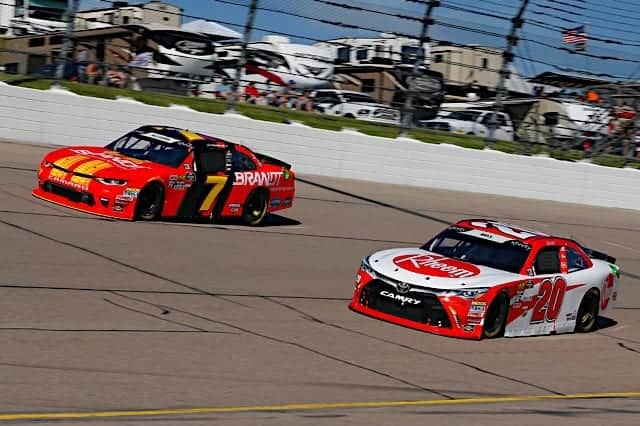 1. Now that a third road course has been added to the schedule during the Monster Energy NASCAR Cup Series playoffs, will it impact the way drivers and teams approach Sonoma Raceway in terms of preparation and strategy?

John Haverlin: The drivers and teams won’t change their approach this weekend. The Charlotte Motor Speedway roval race is still more than three months away, and that track doesn’t have many characteristics similar to Sonoma. Sonoma is very technical, and speeds don’t climb that high there, unlike rovals.

Matt McLaughlin: It’s hard to consider this roval thing a true road course. It’s sort of like combining a duck and a beaver and coming up with a platypus, and then expecting it to win the Kentucky Derby. Even the two long-term Cup road courses (Watkins Glen International and Sonoma) are entirely different animals these days, so I’m not sure there’s much of use for the roval to be gleaned at Sonoma.

Vito Pugliese: No difference whatsoever. The Charlotte road course debut is an eternity away and is still a total unknown for those who haven’t tested it. There is many a Chevrolet team that needs a win, and soon, so it can go to the roval race with a reason come playoffs time. Besides, this is the first race of the grueling summer stretch. There will be a new generation of cars built by the time that third road course race comes around; it might as well be next season trying to compare the two.

Mike Neff: First of all, the roval is not a road course. That said, no; the strategy for this weekend is primarily dictated by stages. The only real decision is when to make the final pit stop. Prep for Sonoma might be a little helpful for the roval, but not much.

Michael Finley: There might be a little more information gathering than usual because Sonoma is a little more similar to the roval layout than Watkins Glen. Otherwise, there’s not going to be much of a difference besides road course specialists like AJ Allmendinger and Michael McDowell having even more incentive to take some risks to win and get into the playoffs with the same track type.

2. While Cup is being dominated by a few drivers, only two drivers have more than one XFINITY Series win. Do you see anyone as a championship favorite? Or is the field still wide open?

McLaughlin: Of the 14 NXS races this season, only six have been won by series regulars, and that’s because the Cup guys weren’t allowed to participate in the reindeer games at some events. The title is still up for grabs. with the JR Motorsports guys perhaps having an advantage at least until the start of the playoffs.

Finley: XFINITY is the most wide-open series in all of NASCAR. Anybody in the top 10 in points could win any race on any weekend, unlike last year where JR Motorsports was a bit above most of the rest of the field.

Wesley Coburn: Cole Custer. He drives a Stewart-Haas Racing car, and it’s bringing strong equipment even in NXS. Custer doesn’t have a win yet this season, but he’s won three poles and has finished in the top 10 in 11 of the last 12 races. Christopher Bell will be a challenger for the title, too; he’s got a dirt background, and like Tony Stewart would, Bell will heat up during these summer races.

Mark Howell: XFINITY is providing the best racing in NASCAR this year. The XFINITY-only races in 2018 have demonstrated that there’s no obvious favorite to take the title at Homestead-Miami Speedway. Let’s hope that trend continues; it’s nice to see more than three drivers contend each week.

Haverlin: The championship is still pretty wide open. The top eight drivers are within 96 points of each other, but with 12 races remaining until the playoffs, it’s possible someone gets hot and shows some dominance throughout the summer months. If that were to happen, I’d suspect it to be from a JR Motorsports or Joe Gibbs Racing driver. Justin Allgaier or Bell may have that potential.

Pugliese: Any of the top six in that series have to be considered legitimate contenders. I guess by definition they’d have to be anyway, since it’s going to come down to four racing for the title.

Koelle: The field is still wide open. You have roughly 10 drivers who could win the championship should they get lucky at Homestead. Playoff contenders are again slimmed down to roughly those 15 drivers who are running a full schedule. JR Motorsports is on track to dominate the playoffs again, and Michael Annett is starting to show something of some sort.

3. This weekend’s Camping World Truck Series winner, Brett Moffitt, had an unsuccessful attempt at Cup racing a few years ago. Do you think he should try MENCS again? And are there any other drivers who could benefit from a rerun through a lower-tier series?

McLaughlin: For years, drivers whose careers were on an upward trajectory faced a conundrum. Did they want to make a lot of money running poorly for a lesser team in the Cup series or a little money for running well and possibly winning in a second-tier series? At least a half-dozen Cup teams would be better off running XFINITY rather than getting in the way on Sunday, but economically that’s not feasible. I wonder if NXS purses will soon start including food stamps.

Neff: It’s all about the Benjamins. Brett Moffitt is having trouble getting sponsorship on his trucks right now; it costs a lot more to race in the Cup Series. There are several drivers I’d like to see get a shot in Cup, but unfortunately they won’t get a shot unless Daddy Warbucks steps up. Trevor Bayne is an obvious choice for a Cup driver to get a reset in the XFINITY or Truck series.

Koelle: What would you call successful, then? Brett Moffitt had a great run at Atlanta Motor Speedway going in 2015. Yes, going to Front Row Motorsports is tough, but he still had some high points in that ride. Moffitt has found a home in Trucks but just hasn’t found the funding to stay.

Coburn: Let’s see if he can run full-time this season in the CWTS first and how he does in the championship hunt. Bayne is a good candidate for dropping to XFINITY, along with maybe Ty Dillon. Annett and Ryan Reed both could likely be more competitive in the trucks.

Haverlin: When Moffitt was in the Cup Series, he was in back-marker equipment most of the time. Naturally, his eighth-place finish at Atlanta in 2015 was memorable, but he was in a Michael Waltrip Racing car. He should be concerned with performing in the Truck Series before thinking about a return to Cup. If he contends for a championship with Hattori Racing Enterprises, then it’ll be OK to consider ways to further his career. As for drivers that could benefit from a rerun to a lower series? Bayne is the first that comes to mind. He doesn’t have the talent to be competitive in the Cup Series, so the XFINITY Series would be a good fit for him. He could be a contender there since his Cup career has been a disappointment.

Howell: I’m not sure why so many young drivers are pushed into the Cup Series so quickly. The adage “make hay while the sun shines” comes to mind, but the majority of these folks could benefit from more time at lower levels. I’m old enough to remember the era when a number of talented drivers actually ran Sportsman cars for multiple years without rushing a jump to the Grand National division. NASCAR wasn’t a national phenomenon back then, so logging seat time in a minor league series made logical sense:  the more you raced, the better you became. It wasn’t about snagging a youth audience; the key was filling fields with experienced competitors. With sponsor money so tight, I can’t understand the need to stick relatively inexperienced young drivers in Cup cars. I know you can’t learn if you don’t race, but you also can’t run until you master the art of walking.

4. For the second week in a row, the FOX booth announcers were not at the track for XFINITY but rather broadcasting from a studio in Charlotte. Does it matter if the commentators are on site or not?

Howell: The idea that a network would have announcers working from a different location seems problematic, especially in an era of transparency. If the booth crew is open about its far-flung coverage, then OK. But if they pretend to be somewhere they’re not, that’s another issue. Before ABC broadcast the Indianapolis 500 live, there’d be times when Jim McKay would sound as if he was calling the race from an editing booth, but at least viewers knew they were watching taped coverage. As long as the announcers are honest about their whereabouts, there’s no real crime being committed. Isn’t it akin to suspended a crew chief making decisions during a race via cellphone from his living room?

Finley: How much money is FOX spending every year on NASCAR? How much does it cost to fly maybe 10-20 people and put them up in a hotel in Iowa for a Saturday night? It’s just a really cheap move from a company that’s about to get paid over $70 billion and will be reinvesting a lot of that into its sports division.

Neff: Yes, it absolutely does. Things happen that are not visible on TV. Commentators can speak to people in the garage and learn things that can be incorporated in the broadcasts. It is an embarrassment that a national series broadcast partner won’t spend $3-4,000 to have the team at the track.

Pugliese: It probably feels a little weird if you focus on it, but I managed to watch Formula 1 for damned near a decade before I realized that David Hobbs and Bob Varsha were in Charlotte watching on TV with me, and not at Imola or Interlagos. Then again, with certain pit personalities tripping over things and almost going Chris Farley onto the cars, maybe it’s not such a bad thing. That said, everyone needs to cut Michael Waltrip a little slack. Yours truly about got upended by Greg Biffle in the garage area one time as I was looking around and not paying attention during practice. I also saw a very well-known pit reporter trip over a jack handle and yard sale it in the XFINITY garage a few years back. Things happen every week, sometimes they just happen to get caught on camera.

Coburn: Races can be covered remotely, but ideally you always want to be at the event you’re covering. The atmospheric details can enhance the story, and interviews are easier. Does it save money to have the announcers stay in Charlotte? Probably, so I can understand why they’re doing it. But in a perfect world, they would always be at the track