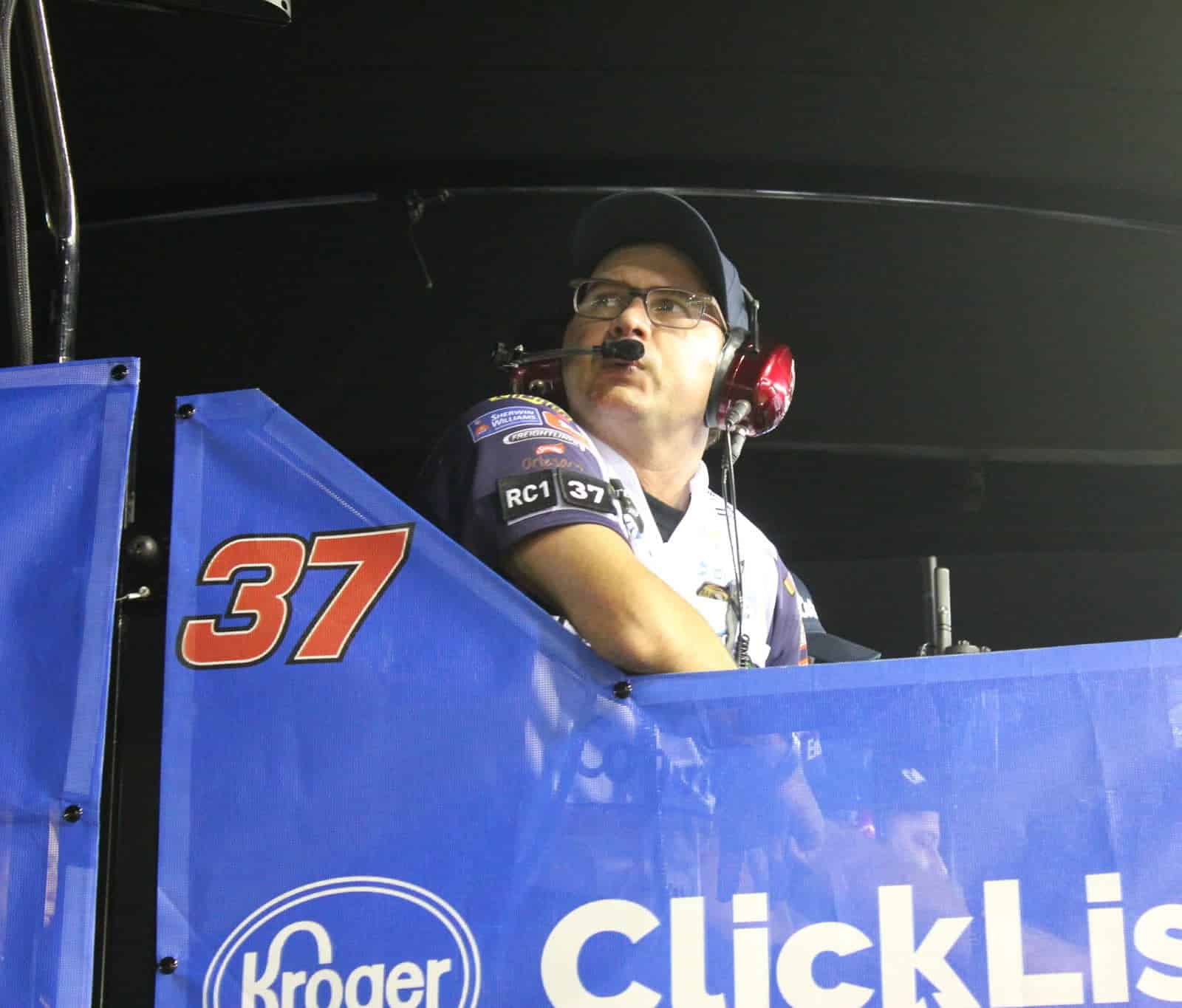 The second off-week of the 2018 Monster Energy NASCAR Cup Series season afforded teams a chance to unwind, recharge and prepare for the summer run of nine straight races before the final off week of the season. Like most teams, the No. 37 team, driven by Chris Buescher, took a couple of days to button up some things on its Sonoma Raceway cars before enjoying a little rest and relaxation. The cars headed out early Tuesday morning, and the personnel head off Thursday.

Looking at the challenges of what Sonoma holds for the race teams, Trent Owens breaks it down for everyone in Tech Talk this week. He discusses the decrease in body roll over the last couple of years with the new lowered ride height, along with the challenges in maintaining that lowered attitude based on how aggressively his driver is going to hit the curbs. He additionally discusses brakes and how little they are really abused at Sonoma, along with the camber that is employed to help the cars make it around the twists and turns of a road course. He finishes up with the commitment line for pit road at Sonoma, which can be a penalty if a driver heads to pit lane at the wrong time.

Mike Neff – What did you do over at JTG Daugherty for the week without having to head to the racetrack?

Trent Owens – We took time to try and get a little ahead on the Sonoma cars early in the week. With it being a weekend off, a lot of our travel employees will take time to use some vacation days, especially with their kids being out of school, and took their families to the beach and so forth. Not a lot got done from Wednesday through Friday; a lot of people took time off. We did use Tuesday to really get ahead on the Sonoma cars and make our week this week a little bit better. In a lot of ways it was just a week to reset and get ready for our summer run. Got ready to get back at it starting in California, so it was pretty easy.

Owens – At this point in the season, I feel like the No. 37 team with Chris, in our second season together… we’ve put better racecars together on the track. I feel like we’ve qualified better. We’ve hit some of the goals that we set out to start the season. We’re happy about that. Unfortunately we haven’t been finishing as well as we need to. That is definitely something we have to figure out and work on so we can get back into the top 25 in points. We need to try and get some good finishes here this summer and finish the season out strong. Communication-wise and [in terms of] the team working together, I am pretty happy with that.

I’m pretty happy with how our Friday and Saturday practices have gone. They’ve gone rather mildly compared to last year; [we] just have to execute the races and figure out how to finish a little better when the checkered flag flies. I think we can still wind up having a good season.

Neff – As we head to Sonoma, have you already gone through all of your calculations to figure out exactly what your pit windows are going to be and how your race strategy is going to play out?

Owens – I haven’t really looked at it in too much detail yet. Some of that is so track position-dependent. If you’re leading the race, your pit strategy will be different than if you are 15th to 20th. We’ll get out there and see what the speed of our car is. We’ll see if we have to pull an off-strategy move. I will say that, with road races now that we have stage racing, outside of stopping before the stage ends you don’t have much. With the stages and the guaranteed cautions, it has backed some of the strategy moves of road course races out. You really just have to do the best you can in the final stage, knowing when to take your last set of tires. That is what we’ll spend our most time studying.

As of now I haven’t mapped out the full race yet. It will most likely be similar to last year. We’ll study last year’s race quite a bit and see if there is anything unique that potentially stands out.

Neff – With the new rules over the last couple of years, do you still have as much body roll as you used to have, or are you able to keep the car down more and maintain a more stable platform?

Owens – When we visit Sonoma, especially with these new rules that we have with the dropped height since 2014, the cars do roll less. We are able to keep the platform of the car lower to the ground. The balance there is how much the driver is going to hit the curbs. You can’t prepare for that in simulation. Once we get out there, we’ll see how the driver is hitting the curbs, and we’ll decide how aggressive we can get with lowering the car.

The rules package that was changed in 2014 has really, in my opinion, helped the driveability of the cars on road courses as much as anywhere. You will still see the cars getting air after they hit the curbs. Not getting a lot of air is the goal. … The rules have made it much easier to control that now.

Neff – With the side skirts on these cars, the drivers go onto the track and wiggle the car to get the skirts to flare out a little bit, which is what you want them to do. Is that something you have to worry about with drivers hitting the curbs and potentially bending the skirts under?

Owens – Yeah, about the side skirt flaring, it’s no secret that you definitely want them to flare out. We’ll at least try and bolt them to the racecar and point them in the right direction so that if they do hit the curb, they will hopefully flare out. It isn’t as easy as hitting a curb purposely a certain way, but we will try and at least prepare them so that if they do hit, they will hopefully bend outward.

No matter what track we go to anymore, you definitely have to worry about the aerodynamics of the car. All of the hype and talk that you hear is about the optimization of the side skirts.

Neff – For road courses, are you able to widen or loosen up the shift pattern on these transmissions to help your driver not miss shifts?

Owens – At Sonoma we do a lot of shifting. With the ratio availability in the transmissions, surprisingly we very rarely get into fourth gear, if ever. We pretty much set the ratios up to use first, second and third primarily for the entire lap. That reduces your chances for a missed shift and also cuts down on the number of shifts you need. The track presents itself where you’re allowed to run it with just three gears. Sonoma is a nice track from that perspective. We’ve seen transmission failures in the past out there, for sure, but I feel like most of those failures are from missing a shift or something like that rather than from just wear and tear.

Neff – On the braking side out there, there aren’t a lot of real heavy braking spots other than Turn 11. Do you have to worry as much about your brakes there as you do at Martinsville Speedway?

Owens – When you talk about road courses, brakes are always a topic. Sonoma is one of the easier braking road courses that I have experienced as a crew chief. You do hard braking down into Turn 11, but the brakes have a lot of time to cool before you use them again. I’m going to say Martinsville is probably worse than Sonoma on brakes. Watkins Glen [International] is far worse than Sonoma on the brakes. Looking at the racing, some people might not think so, but I can tell you from experience. Sonoma gives you a chance to overcook the front brakes if you try and drive it a little too hard and a little too deep. All in all, Sonoma is fairly easy for a road course. When I was racing XFINITY in Montreal [Circuit Gilles Villeneuve], that place is brutal on brakes. Sonoma is nothing like that. Even though we run the biggest brakes we’re allowed to use, as far as temperature at least, it is definitely easier than The Glen on us.

Neff – On the front end of the car, do you do much in the way of camber on the front tires?

Owens – Road course camber is much different from ovals. We’ll run negative camber on both sides. It is pretty much symmetrical for the most part. When you turn one direction, you get more camber on the outside tire.

I don’t know what a lot of camber is a lot of times. We have the luxury of having tire data these days. We just try and hit our optimum camber as advertised by the tire data. You do have to run camber on both sides. You can’t just prepare for all right-handers or just the high-speed left-handers. You have to have help turning both directions so a little bit of grip is given up on the inside tire, because you have to prepare for the other direction. It is definitely a lot different cambers than you see on oval tracks. As far as the amount of camber, we pretty much just set it to our data.

Neff – Are you using the same tires you have the last couple of years out there?

Owens – Yeah, we’re still using pretty much the same construction tire. Haven’t seen any real problems from last year or the year before. It is one of those situations that if it isn’t broke we’ll just keep digging with it, so I think we’ll be good again.