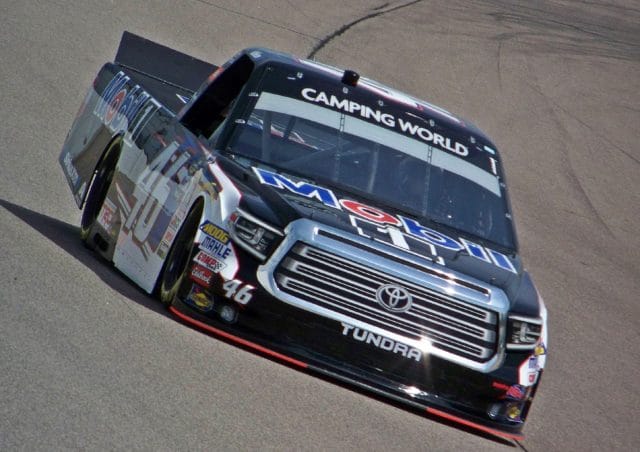 The Toyotas of Christian Eckes and Brett Moffitt led the way in Friday’s practice sessions at Gateway. NASCAR had three practice sessions slated for Friday but rain forced NASCAR to reschedule final practice for Saturday morning. Even with the uncooperative weather, the NASCAR Camping World Truck Series still got a chance to show their stuff before the race and qualifying on Saturday.

Eckes, making his second start in the NASCAR Camping World Truck Series, turned a 134.360-mph lap around Gateway. Just .009 seconds behind Eckes was his Kyle Busch Motorsports teammate Noah Gragson who finished second in the session.

Ben Rhodes finished the session in third while Moffitt and Matt Crafton rounded out the top-five speeds.

Myatt Snider and Moffitt both turned 23 laps in the session, the most of all drivers. There was a 5.174-second margin between first-place Eckes and last place Camden Murphy.

Moffitt, last weekends winner, turned a 137.191-mph lap around Gateway to put his No. 16 AISIN Toyota Tundra in first on the speed charts. Snider finished the session in second, just .128 seconds slower than the leader.

Johnny Sauter finished the session in third while Riley Herbst and Ben Rhodes rounded out the top-five speeds.

Noah Gragson turned the most laps in the session at 42. There was a 3.275-second margin between first place Moffitt and last place Josh Reaume.