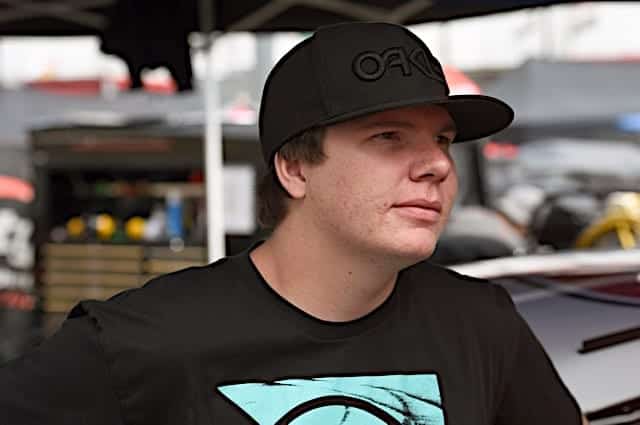 A return to the superspeedways marked a return to dominance for Sheldon Creed, who picked up right from where he left off in Michigan two weeks ago by winning the pole, leading more than two thirds of the race and driving away from the field on lap 81 to score his second win of the 2018 season in the PapaNicholas Coffee 150. Creed’s run capped another stranglehold run for the powerhouse MDM Motorsports team, with Creed, Chase Purdy and Harrison Burton sweeping the podium positions. Christian Eckes and Riley Herbst rounded out the top 5.

ARCA’s first race at Gateway Motorsports Park since 2007 found it hard to pass for much of the evening, as a recent repave narrowed the already narrow groove on the track’s low-banked corners. However, as the evening went along, several drivers at the top of the field found grip on the higher side of the track, with Gus Dean holding off faster cars for much of the final 40 lap run; Dean, along with Burton and Eckes, staged a terrific three-wide battle inside of 30 to go that was the highlight of the evening. Friday night also marked the return of Ken Schrader to ARCA competition for the first time since 2016; he finished in 11th, the last car on the lead lap.

Creed’s victory allowed him to extend his points lead to a season-high 155 over teammate Zane Smith, who made hard contact with the turn 2 wall battling for Dean on lap 75. Smith finished seven laps down in 16th.

Seven of 10 race wins. Two of the last three poles. The top two spots in the point standings, and three of the top 5. MDM Motorsports has turned the ARCA Racing Series into their playground thus far in 2018, and Gateway was no exception. Sheldon Creed won the pole, won the race and was virtually untouchable once he got out front, just as he was in Michigan two weeks prior. Chase Purdy scored a career-best superspeedway finish in the runner-up spot, and scored even more points with an honest post-race interview that he recognized the driver is still catching up to how good his No. 8 car really is. Harrison Burton proved one of only a handful of the cars in the field capable of passing at will and finished third; his average finish with MDM’s No. 12 team through four races this year is 4.0. And lastly, ARCA debutant Anthony Alfredo, last year’s CARS Tour runner-up, finished on the lead lap in seventh.  Of note, this marked the second consecutive race that a team placed four cars in the top 10 (Venturini Motorsports did the same last weekend at Madison).

Restarts have been an issue for a number of promising prospects in the ARCA ranks this year; last weekend, the No. 20 team encouraged eventual race winner Chandler Smith to experiment with restarts, as they were “the weakest part of his racing”, while Harrison Burton post-race admitted that he need to improve on the starts. One driver that seems to have that piece figured out is Christian Eckes, who proved a nuisance on multiple starts, including the first lap of the race, for leader Sheldon Creed. Eckes, whose performance on restarts was largely responsible for his win at Salem earlier this season, was again a strong contender for the race win before washing up the track in turn 2 on lap 81. Eckes finished fourth, a superspeedway career-best.

Riley Herbst definitely scored the award for most cars passed in Friday’s race, though that came from his own making; Herbst spun after getting too low onto the rumble strips trying to pass Sheldon Creed in turn 2 on the opening lap, sending him to the back of the field. It only took nine laps after a lap 6 restart for the No. 18 to battle back into the top 10, but Herbst got into more trouble under a lap 66 yellow, incurring a one-lap penalty for passing the pace car under yellow. Capitalizing on a lucky dog less than 10 laps later, Herbst stormed through the field to finish fifth by night’s end, his fourth top 5 in the last five races.

Gus Dean and the No. 32 team might be slightly disappointed in finishing sixth, but in terms of driver adaptability, Dean was among the best of the evening. It was Dean and his No. 32 that experimented with the grip compound NASCAR had laid in the turns for Saturday’s truck race, and using that strip he was able to keep multiple fast cars at bay for laps at a time. Of note, Dean was the highest-finishing driver not in a Toyota.

Max Tullman is likely one driver that would rather see ARCA wait another decade before racing at Gateway again. Tullman’s issues began the day prior to race day, when he hit the wall less than a half hour into open testing on Thursday. The Mason Mitchell Motorsports team, as reported on arcaracing.com, spent the remainder of Thursday’s test repairing the No 78 car for Friday. Come race day on Friday, Tullman found more trouble less than halfway through the event, hitting the wall and coming to rest on the inside of turn 2 less than 50 laps in. Tullman finished 19th, a career-worst finish and the worst finish of 2018 for the No. 78 team.

Any momentum Natalie Decker and the No. 25 team had after a return to Wisconsin last week went out the window on Friday night, as Decker fell from a top 10 starting position early in the running before spinning into the turn 1 wall after contact from the No. 23 of Bret Holmes, caving in much of the right side body work. Decker’s team made quick repairs and kept her on the track, but a 15th place finish, four laps down, dropped Decker to seventh in the point standings (ed. note: this article has been corrected to reflect Decker’s spin came after contact with Holmes).

Zane Smith has made hard, aggressive racing work thus far in the 2018 season to the tune of three wins, but that aggression caught up to the No. 41 team on Friday night. Smith, who like every other MDM entrant had tremendous speed at Gateway, was attempting to capitalize on traffic from a lap 73 restart when he dropped deep under the No. 32 car in turn 2. Unable to complete the pass, Smith hooked the No. 41 to the right and ended up making hard contact with the turn 2 wall, causing heavy damage to the right front fender. Finishing seven laps down in 16th, Smith endured his worst finish since the season opener at Daytona.

It’s another short turnaround for the ARCA Racing Series, as they head to the Chicagoland Speedway for a Thursday night race under the lights. Coverage of the Scott 150 begins at 9pm eastern on Fox Sports 1.