Also, with only 0.1 points awarded for each lap led by a driver, the need for a dominator is less important when building a winning lineup. Sunday’s 110-lap race will only have a total of 11 points up for grabs in this category. Take note when building your roster and focus on mid-pack drivers who can climb up toward the front on race day.

Here are a three drivers that are primed for a big afternoon at Sonoma.

Bowyer was one of many good road course drivers who qualified poorly on Saturday. With less than five minutes remaining in the first round of qualifying, almost every team decided to hit the track at once. As a result, Bowyer was stuck in traffic and could not lay down a good enough lap to transfer to the next round.

He will be driving a car that was the fastest in first practice, and the third fastest long run car in final practice. It shouldn’t take long for him to find his way inside the top 10.

Bowyer also has the best average finish at Sonoma among all active drivers. His only win came in 2012, but since then, he has racked up three top-five finishes. That included a second place in his Stewart-Haas Racing debut a season ago, a near miss that proved the difference in him missing the playoffs.

The SHR driver is coming off a win at Michigan International Speedway, his second of 2018.

Denny is known for his short-track prowess, but he has become a top road course driver over the past few seasons. He was the runner up in this race back in 2016, and followed that up with a fourth place finish last season. During those two races, he led a total of 44 laps, the most of any driver.

If we include his Watkins Glen results, he becomes even more impressive. At the other road course on the schedule, he has one win (2016) and another fourth place finish over the past two years.

Hamlin is another fast driver who will start mid-pack and has high potential for finishing up front.

Keeping with the theme of drivers starting in the middle of the field, the third hot-start is Kurt Busch. Kurt lit up the practice leaderboard during the final session on Friday. He had the fastest single lap speed, and also ranked second in best 10 consecutive lap average.

Sonoma is by far Busch’s best track. Since 2005 he ranks first in driver rating and fastest laps. His lone win at the track came in 2011, but since then he has not finished outside the top 12. During the span of six races since his win, he has three top five finishes.

Busch has a hot rod this weekend and can compete for the win, he just has to climb through traffic and rake in the positive position differential points first. 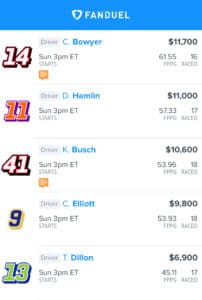