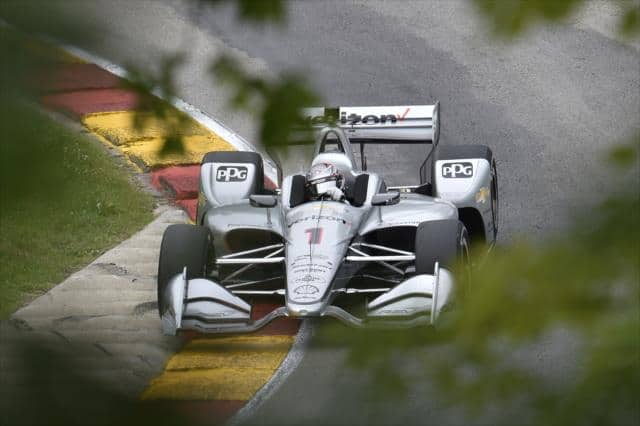 Josef Newgarden made sure to put the Verizon IndyCar Series on notice that he can’t be overlooked to repeat his championship victory from 2017. Newgarden led the way in both practice sessions on Friday for Sunday’s KOHLER Grand Prix at Road America.

Newgarden ran the best lap of the day in the second session at 1 minute, 42.6279 seconds in his No. 1 Verizon Team Penske Chevrolet.

“I think we are relatively pleased,” Newgarden said after the session. “The car has been easy to work with, which is great. It is nice when you don’t have to change too much.

“We’ve been trying things to make sure we understand sort of both ends of the car and where it can go if we adjust either end of it. Seems quick right out of the box; we haven’t had to do too much with it. The Chevy package is working really well, which I felt like it would be strong at this kind of track.”

A  140.230 mph. lap around Road America put the defending series champion on top of the speed charts in the first practice of the afternoon. Rahal-Letterman Racing driver Takuma Sato finished the session in second, 0.4252-second behind leader Newgarden.

Alexander Rossi finished the session in third while Robert Wickens and Marco Andretti rounded out the top-five speeds.

Three drivers turned 15 laps in the session (Matheus Leist, Jordan King, and Zachary Claman De Melo), the most laps of the session. Of the 23 drivers who turned at least one lap in the session, a total of 288 laps were turned in the first session.

Newgarden set the pace and the lap count as the No. 1 turned the most laps of the session at 26. All 23 drivers resulted in a total of 466 laps in the session.

As noted above, by sweeping the sessions Newgarden had the best combined speed on Friday. Wickens finished second overall with a 01:42.9025-second lap (140.428 mph).

39 laps were the most laps turned overall, two drivers did so. Newgarden and Leist both turned a total of 39 laps in both sessions while Alfonso Celis Jr., who is making his Verizon INDYCAR Series debut this weekend, turned the least amount of laps at 17.

Final practice is slated for noon ET on Saturday. Qualifying begins at 4 p.m./ET with both quals and practice being streamed live on RaceControl.IndyCar.com, youtube.com/indycar and the INDYCAR Mobile app. NBCSN will air qualifying at 6:30 p.m./ET. The defending pole winner of this race is not entered in Sunday’s race (Helio Castroneves) while the last pole winner entered is Will Power.

The 10th race of the Verizon IndyCar Series schedule airs live at 12:30 p.m./ET on NBCSN and can be heard live on the Advance Auto Parts INDYCAR Radio Network.