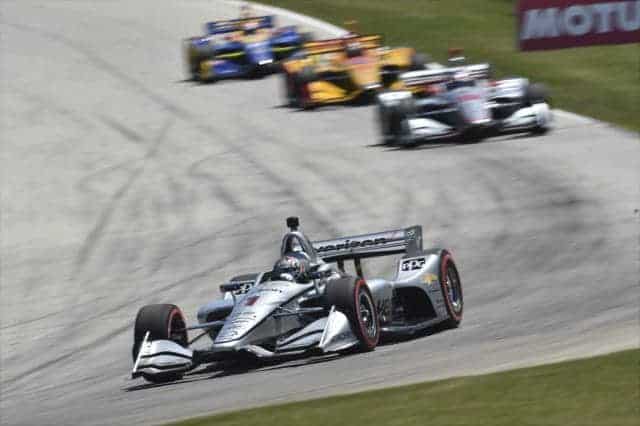 The first goal for Josef Newgarden this weekend was to earn the pole position. A last minute fast lap during Saturday’s qualifying session put a check mark in that box, and much like his winning performance at Barber in April, Newgarden put in another dominating performance on Sunday in the KOHLER Grand Prix.

The Hendersonville, Tenn. native returned his name to the hat of championship contenders after holding off the two drivers who have dominated the month of June. While Newgarden ran away, Ryan Hunter-Reay and Scott Dixon had to battle for second with Hunter-Reay winning that battle.

Takuma Sato, fourth, earned his best finish since the second Detroit race last season. Robert Wickens rounded out the top five with the fourth top-five finish of his career.

After starting from the pole, Newgarden led the first 13 laps before making his first pit stop, surrendering the lead to Dixon. Those two laps led by Dixon were the only ones not led by Newgarden as he ran away with the lead and victory.

Hunter-Reay, with his second-place finish, moves into second in the points standings. He has a 45 point margin between him and points leader Dixon. Alexander Rossi finished the race in 16th and fell to third in standings but is tied with his teammate Hunter-Reay.

The Verizon IndyCar Series returns in two weeks at Iowa Speedway for the Iowa Corn 300. The 12th Iowa Speedway race will air live at 2 p.m. ET on NBCSN and will be broadcast live via the Advance Auto Parts INDYCAR Radio Network.