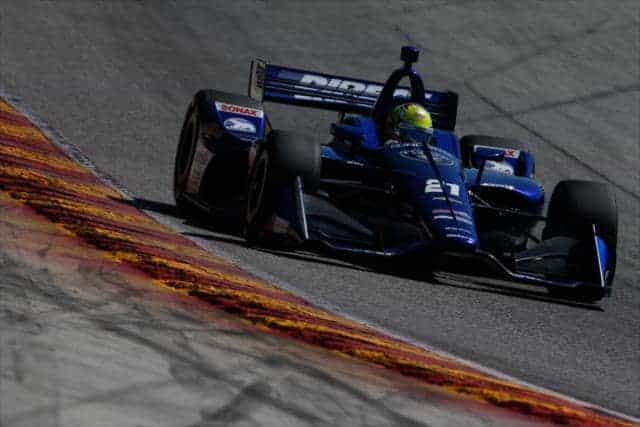 After a string of some bad luck, Spencer Pigot appeared to catch a break Sunday (June 24) in Road America. Pigot finished in the eighth position, his second top 10 of 2018 and best result since last season at Long Beach.

Pigot had a strong Direct Supply Chevrolet all weekend, qualifying 10th. But when Will Power had an issue at the start, his bad luck appeared to strike again. It took a competitive car, some patience and a solid strategy for Pigot to slowly fight back. Making up some positions on pit road also helped immensely.

“The start was pretty eventful for us,” said Pigot. “Obviously, Will (Power) had an issue and I got boxed in and the field was just kind of streaming past me on the inside. We fell back a bit on the first lap, but we were able to pass a lot of guys and move up. But the Direct Supply Chevy was really good for us, and the guys did really good on pit lane.”

During the final stages of the race, the real battle was for seventh. Pigot battled with 2016 Verizon IndyCar Series champion Simon Pagenaud but ultimately had to settle for eighth.

“It was a little frustrating to get passed by Simon (Pagenaud) there on the last lap, but we did the last stint there on used reds (Firestone alternate tires) and we were just hanging on there and he just got me,” he explained. “Overall, it was a great race and I had a lot of fun. There were a lot of really good battles, and a clean race, but a lot of hard driving.”

With the eighth-place finish, Pigot remains 15th in the Verizon IndyCar Series points. He’s two markers behind 14th and 222 behind leader Scott Dixon.

Next, the Verizon IndyCar Series heads to Iowa Speedway for the Iowa Corn 300. It’ll be Pigot’s first start at Iowa but he does have one start in the Indy Lights Series in 2015. Driving for Juncos Racing in that race, he ran eighth.