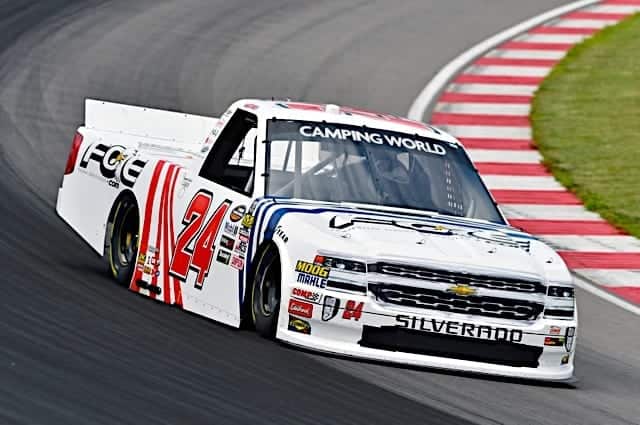 In a Nutshell: Justin Haley scored his first career victory Saturday night at Gateway Motorsports Park when he bested Johnny Sauter on the final restart with two laps remaining. The driver of the No. 24 Chevrolet led just seven laps on the night but had to endure a pair of restarts before taking the checkered flag 0.753 seconds ahead of Todd Gilliland. Sauter, Myatt Snider and debuting driver Zane Smith rounded out the top five.

“I’ve been dreaming of this since I was a little kid,” Haley said. “Every time you start doubting yourself, you need a situation like this to come along. I’m about to cry; this is amazing. I raced my heart out. This is all I’ve worked for my whole life. I can not be more thankful for the people that I’m surrounded by.

“This is for everyone that’s ever pushed me to this point. I never thought this would be possible. Thank you Fraternal Order of Eagles, GMS Racing, Maury Gallagher, Todd Braun, my family and friends. It’s been an incredible experience. You never know when you’re going to race again but now we can say that we’re Truck Series winners.”

Chad Finley, who made his first start in three years, wound up sixth, followed by Jesse Little. Riley Herbst, who made his series debut, was eighth. Cody Coughlin and Noah Gragson rounded out the top 10.

The race was slowed by nine cautions and stage one and two ended under yellow. There was also a short red flag for cleanup after John Hunter Nemechek‘s truck spilled fluid on the track, which caused a hard crash for Justin Fontaine and debuting driver Tate Fogleman.

Who Should Have Won: Though Haley only led seven laps, he led the one that counted the most. But perhaps what’s more important about this win is that Haley bested his GMS Racing teammate Sauter, who is arguably one of the strongest restart drivers in the series today.

Riley Herbst made the first of two scheduled starts behind the wheel of the No. 51 Toyota for Kyle Busch Motorsports. While he was never a factor to win, he did score a solid eighth-place finish after starting 17th.

“It was good. I made a bunch of mistakes, which I felt cost us a higher position, maybe top-five but overall it was a great day,” Herbst said of his debut race. “Thanks to Kyle Busch Motorsports for giving me an opportunity to come out here and race.”

Meanwhile, Zane Smith was a late addition behind the wheel of the No. 54 Toyota for DGR-Crosley this week. En route to a top-5 finish, Smith noted how difficult it was to move through the field, particularly with a gear issue.

“We could not get from third to fourth [gear]. I don’t know what that was all about. I figured out the hard way that clean air is the goal in these things,” Smith said. “The restarts there were just shuffles all the way back. And we would have to get all of the way back to the front. Once we would get somewhat towards the front, a caution would come out. And then just a repeat. But it was fun. I will definitely take that for how our night unfolded. There are a ton of people I have to thank. The whole DGR team. My mom and dad. The fans for coming out. Hopefully it was a good show to watch.”

The other two debuting drivers, Tate Fogelman and Bryant Barnhill, ended up 27th and 31st, respectively. Fogleman was caught up in a wreck he couldn’t avoid with Justin Fontaine, while Barnhill retired after just five laps, citing engine problems.

Gateway Motorsports Park may be a 1.25-mile oval, but it sure can deliver some hard hits.

Dalton Sargeant was the first to find out the hard way with three laps remaining in stage one. Contact with Todd Gilliland cut down Sargeant’s left front tire, sending the No. 25 Chevrolet hard into the outside wall. The damage proved terminal and the rookie was left to settle for a 30th-place finish after completing just 31 laps.

“I had some contact with the (No.) 4 truck (Todd Gilliland). It just happened to be on the restart there before the end of stage one and I got into the left front fender and I’m guessing that’s what might have caused that left front to go down. It wasn’t too big of a deal. Once we hit the wall it must’ve broke the brake lines and I had no brakes.

“Right now, we’re just working on trying to get better each and every week. We’ve had some unfortunate finishes these past couple of weeks. The speed hasn’t been there so we’re just trying to get our No. 25 Performance Plus Motor Oil Chevrolet back up front and back running fast.”

Later, on lap 115, John Hunter Nemechek laid down oil on the track after a piece of debris punched a hole in the oil pan, bringing out the yellow. At the same time, Justin Fontaine hit the slick part of the track and spun, driver’s side first, into the outside wall, and Tate Fogleman piled right in, t-boning the No. 45 Chevrolet.

Caution! Oil from the 8 causes a heavy crash for Fontaine & Fogleman. #VillaEaton200 pic.twitter.com/dCmuFtr1di

Fontaine and Fogleman got out of their trucks on their own power, but Fogleman limped a little after emerging from the No. 20 Chevrolet before sitting against the wall on the track. Both drivers were trreated and released from the infield care center.

How about that!?!? What a great run for our @strutmasters truck! Thank you for all that you did for us to get here! Proud of my team. We worked on the truck all night. Gambled some. Lost some. Gained it back at the end. Pumped to say the least!

No. of rookies to finish in the top 10: 2; Todd Gilliland, finished second; Myatt Snider, finished fourth

Finished p5 in my @NASCAR_Trucks debut, couldn’t get it from 3rd to 4th on restarts which hurt us with dirty air and fought tight but learned a ton. I’ll take it! Thank you @DGR_CROSLEY for all the hard work ??

Up Next: The Camping World Truck Series heads to Chicagoland Speedway next Friday night. Coverage for the Overton’s 225 begins at 9 p.m. ET on FOX Sports 1; the race can also be heard on your local MRN affiliate or SiriusXM NASCAR Channel 90.