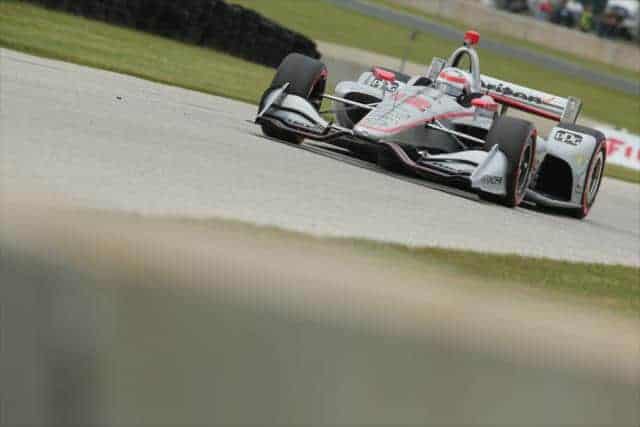 Will Power started the Kohler Grand Prix from the front row but was immediately off the pace when the field took the green flag.

The No. 12 Team Penske Chevrolet fell to the rear as 21 cars passed last month’s Indianapolis 500 winner going into Turn 1. He brought the car to the paddock where his team attempted to resolve his undiagnosed issue and returned to the race 14 laps down, but couldn’t retain power. He officially retired on Lap 20.

“Literally, as soon as I started warming up the brakes, there was something amiss there — don’t know what it is,” he told IndyCar Radio. “They replaced the exhaust, and it blew straight back out, so it’s something funny going on in there.”

Power ended up dead-last 23rd and earned a mere seven points, relegating him to fifth in the standings. He’s now 65 marks behind points leader Scott Dixon.

He’s failed to finish in four of 10 races this year, so fifth isn’t nearly as bad as it could be for the Australian. He crashed at Phoenix and Texas after starting both races from third and suffered a mechanical failure at Barber Motorsports Park.

“It’s unbelievable the amount of DNFs I’ve had. I’ve never had that many in a career in such a short span of time. That’s racing — it goes one way and then another,” he said. “In the month of May, I think we were fifth or something in the championship, and then we were leading. So it can change.

Power was actually seventh entering the Indy 500 and became the championship leader after winning it. The season is barely past the halfway mark, so there’s plenty of time for his fortune to make a 180.

“It’s amazing how quickly it swings,” Power said. “But that means it could swing back the other way.”