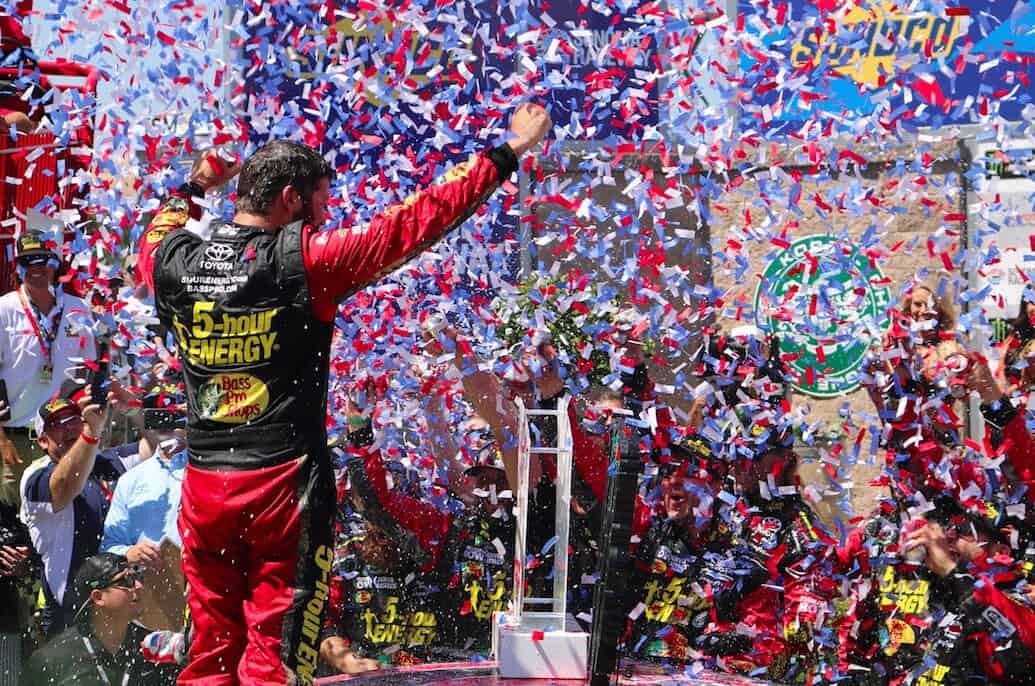 ONE: Hitting My Marks

This past weekend, I had the opportunity to work the NASCAR race for Frontstretch as an official photographer at my home town track of Sonoma Raceway. I’ve shot there twice for INDYCAR but this was my first time on the job for stock cars. One of my main goals for the two Friday practice sessions was to figure out the best spots in and around the track. I had researched NASCAR photography at Sonoma fairly extensively (and by that, I mean for many more hours than I’d care to admit) so I had a semblance of a game plan arriving at the facility.

Or so I thought.

After an excellent briefing on rules and regulations, I had three or four further conversations with some veteran photogs and the official at-track team. Following that, I felt much more set up. Worth noting here, too, is that everyone was more than willing to answer my many questions. I had a full-on written list, and it says a lot that all these folks would take time out of from a busy weekend to help out a newbie. So Friday’s sessions for me were, just as for the drivers, about practice, practice, practice. Hitting my marks. Finding my breaking zones. Scoping out my lines. And with a good break in between the two sessions, it gave me a chance to review and refine my pictures.

By the time the second session was complete, I had actually managed to take some half-decent shots. OK, sure, I had plenty of shots of half a car (or less) and a number more of an empty track (instead of the actual vehicles I was trying to shoot). But I had, at the very least, a starting point for Sunday.

I was like a kid at Christmas on race day morning, a day which also saw my native England playing Panama in the Group Stage of the World Cup (hooray 5 a.m. kickoff!). The good news is we won 6-1 and here for those either uninitiated or uninterested is the reaction from one bar when England opened the scoring. Good times.

I arrived early at the track and took pictures in and around the garage area before heading down pit road to shoot the cars, the pit boxes and to savor that pre-race atmosphere. I shot the air show which is always spectacular at Sonoma and then the driver introductions where the photographers have a designated area. One fan at the front of the stage had a number of the drivers sign his prosthetic lower right leg which he held out along with a Sharpie.

Then, it was time to get the pre-race ceremonies underway so I headed up to the inside of turn 1 (right under the bridge) to shoot the opening laps of the race. I then traced the outside of the track through turns 2, 3 and 3A before circling back to the top of the stand in the second corner for the stage two restart. I made my way back across the bridge and shot from a stage that looks directly at the field heading into turn 1.

Following that, I retraced my steps, traversed the drag strip, and took pictures from the photo holes in the catchfence on the inside of the track along turns 9 and 10. From there, I walked along the K-wall, as the field hurtled past to my right all the way up to the inside of turn 7. Along the way, there are a number of elevated platforms you can shoot from and the proximity of the cars, the throaty roar of the engines and the sheer spectacle of a full field racing past is absolutely exhilarating.

From turn 7, I headed across and snapped a few shots from the inside of turn 4 where the front wheels of the cars lift off, making contact with the rumble strips before going under the tunnel and up across the bridge to the outside of turn 4. Some of the viewing points from the edge of the bridge are breathtaking as the cars hurtle past mere feet away barreling toward turn 7.

By that stage, there were less than 20 laps to go so I made the trek back to the media center to get myself ready for Victory Lane (more on that below.)

Following the raucous celebrations, I listened in on Clint Bowyer and Kevin Harvick’s press conferences before retreating to the photo center to prep my shots for this fine site. All told, it was a wonderful experience.

I look forward to the next time. Can we just race there again this weekend?

An added, unexpected bonus on race day morning came in the form of a pace car ride. A Sonoma Raceway track veteran and all-around great guy offered me the chance to take a spin around the track when I arrived on race day morning.

Let’s just say he didn’t need to ask me twice.

So you sign a waiver, don a protective helmet, jump in an official Toyota Camry pace car, say hello to your friendly driver and take a pretty rapid lap of the track along with two other pace cars doing the very same thing. First off, this was an incredibly unexpected bonus and a very kind gesture. You’ll not be surprised to learn how much I loved it. I’d post the video but then you would all hear me squealing and yelling non-sequiturs. That would just embarrass all of us.

What I did notice was the various changes in both speed and elevation at Sonoma. They’re more pronounced than you might think, and also just how close it can seem in a corner surrounded by just two other pace cars. I can’t imagine what it’s like during the race.

Head north from the city of San Francisco, across the wide expanse of the Golden Gate Bridge. It’s a gorgeous drive up Highway 101 through Marin County, and even nicer once you hang a right onto Route 37. The track itself sits just off 37, at the start of route 121, a main artery into NorCal’s gorgeous wine country. The Raceway is nestled behind Sears Point, a landform that is also southernmost point of the Sonoma Mountain range.

The track is a 12-turn, 2.52-mile road course but both of the two major racing series run slightly different configurations. For NASCAR, it’s a 12-turn, 1.99-mile circuit while for IndyCar, it’s a 2.385-mile circuit.

I moved to San Francisco nearly five years ago after 12 very happy years in Manhattan. My wife, a Bay Area native, wanted to move home and I wanted to stay married so it worked out for both of us. Back when we were considering moving west, we flew out for a visit and my first trip to San Francisco. On that trip, one of my wife’s bargaining tools was the proximity of Sonoma Raceway to where we would be living – just 19 miles north. She even went as far as driving us up there so I could take a look around.

They were racing old-time sports cars that day so I spent a happy hour soaking in the smells and sounds so unique to racing. It might not have been the deciding factor for our move but it was up there in the consideration set. Five years in, I’ve seen four IndyCar races and all five NASCAR races and the race dates are cemented early on my annual calendar. Long may that continue.

As promised, more on Victory Lane. Sunday was my third attempt at getting a photo from the winning celebrations. In the first year of shooting IndyCar in 2016, I was way too late arriving to even get in. Instead, we watched from the outside behind a bunch of very excited Simon Pagenaud fans — the Team Penske driver had just won his first open-wheel title.

Last year, again for the IndyCar finale, I did make it to the correct spot but I was wedged in at the back and had a series of horrible angles that mostly meant I just shot a whole load of random peoples’ heads. Not the best, that’s for sure. So, this time around I was determined to arrive on time, to secure a good spot and make the third time the charm. Did I get a half-decent picture? You can see it above and judge for yourself if I did the job.

FIVE: And Finally… Thank You

One final thought to finish with this week and it’s a simple one. I just want to say a massive thank you to all the employees be they permanent, seasonal or volunteers who ensure that the Sonoma event runs smoothly and efficiently. I enjoyed my many conversations throughout the three days and I’m grateful to all of them for the sterling work they do. Special shoutout to all those who staff the photo center. You guys are rock stars.

See you in September!

How about a link so we can see some of the pit road/track pictures you took?