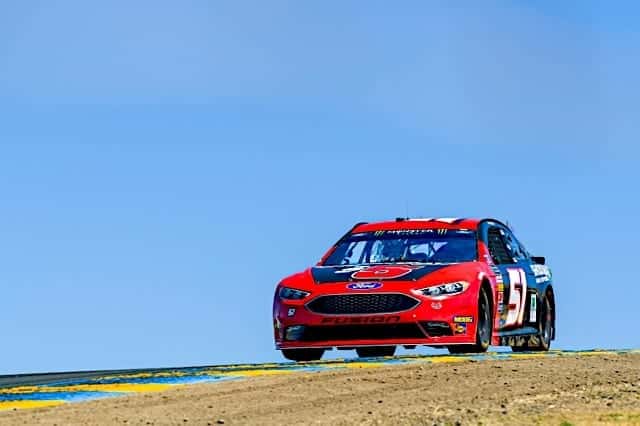 Sonoma Raceway offered a few new twists to the Monster Energy NASCAR Cup Series this weekend. And for the underdogs, it was the first of only three times all year where their road course pros can especially come in handy.

From Chris Cook, Tomy Drissi and Justin Marks, the smallest of the small teams brought out those road course talents for hopeful runs toward the top 25. And though none ended the Toyota/Save Mart 350 in that group, they may have contributed to a quiet race on Sunday.

After 110 laps in the California heat, only Darrell Wallace Jr. lost control and spun on track. Additionally, only four drivers dropped out of the event and only one non-stage caution flew all day. Historically, the least amount of yellows at Sonoma since 2012, a race that still had eight drivers fail to finish.

The reasons for this can vary but driver talent may top any list you may hear throughout this week. The regular drivers were darn quick up front, with Martin Truex Jr. winning by more than 10 seconds after late pit calls split the leaders in the final stage. But even the likes of Alex Bowman and Erik Jones popped that road racing bubble for top 10s.

The underdogs were in that common middle ground throughout the day. A few jumped in the top 10 and one led the event, however, when the day ended, they drifted quiet. But there were still some positives to take exiting Sonoma.

For the first time since Round No. 3 in Las Vegas, Chris Buescher was the Frontstretch “Underdog of the Race” after finishing 12th at Sonoma. The run capped off what was a consistent day in the top 15 and was perhaps met with some disappointment even after finishing top 10 in both stages on Sunday.

But for the most part, a 12th-place run for the JTG Daugherty Racing team is a happy sight. For Buescher, it was his first top 15 since Talladega and his best finish in three Sonoma starts. Also, it continued a nice road course run for the Texan, who finished 11th at Watkins Glen last summer.

Matt DiBenedetto was another guy who ended a slow streak on Sunday, finishing 17th for Go Fas Racing. The finish was his best Sonoma result and his best finish of the year since Richmond, but even better, it ended a three-race streak of bad runs for the team: 37th, 37th and 36th.

Kasey Kahne wrapped up the top 20, giving Leavine Family Raving another one of those quiet, decent days in 2018. After leading 11 laps last time out at Michigan, Kahne faced a new challenge in Sonoma with new crew chief Jon Leonard. The pair saw some issues in practice (spinning early Friday in Turn 1) before qualifying 26th. They continued forward on Sunday and beat out Michael McDowell on the final lap to score 20th, his sixth top 20 of 2018.

Finally, Parker Kligerman earned Gaunt Brothers Racing their best non-plate finish when he scored 23rd for the No. 96 team. Kligerman has run mostly Camping World Trucks in 2018 but was able to make his first road course start in the Cup Series. It ended well and clean for both team and driver.

You couldn’t imagine AJ Allmendinger being more disappointed than after lap 33 on Sunday. A road course ace, Sonoma was one of only two opportunities for Allmendinger to win his way into the playoffs. And for JTG, surely one of their best chances at winning period.

After qualifying fifth, Allmendinger drove to the second spot before scoring the first stage win of his career in Stage 1. Though he was significantly behind Truex on speed, Allmendinger seemingly had a strong base for the remainder of the race. However, a simple yet destructive driver error took him out early in Stage 2 when he missed a shift exiting Turn 11. His day was done and he finished last.

“I haven’t missed a shift on a road course in 10 years,” Allmendinger said. “I was trying to be so patient with it, so smooth. It’s on me. I let everybody down here. It’s just all on me, I don’t know what else to say.”

The only thing you can say is the part break followed a streak of rough finishes for Allmendinger at Sonoma: Four of the last five Sonoma races, Allmendinger finished 35th or worse. His last top 10 at the track came way back in 2012, confirming that his best shot was and still is Watkins Glen International in the month of August.

Michael McDowell raced Allmendinger in Champ Car in 2005 and was another road course guy who aimed high this weekend. Unfortuenly, like Allmendinger, it was met at a low point with McDowell managing only 21st even after scoring stage points in Stage 2.

Front Row Motorsports teammate David Ragan was a step behind in 22nd while Justin Marks came home 28th for Premium Motorsports. Sunday was the first time Marks competed in multiple Cup races in a single season and it ended with his best non-plate performance yet.

Wallace Jr. had his spin in Stage 2, and it came after a difficult Saturday placed him 35th on the grid for raceday. He didn’t advance much, finishing 29th in his Richard Petty Motorsports Chevrolet.

Gray Gaulding had his moments in the top 25, however, fell off in the green-flag marathons to finish 30th. Chris Cook finished 31st in his first Cup start in six years while Tomy Drissi ended a four-year streak himself, finishing 32nd for StarCom Racing.

Ty Dillon was 33rd with Cole Whitt ending his day on lap 57 in 35th. Cody Ware failed to finish a Cup race for the seventh time in seven Cup starts, dropping out on lap 42 in 36th spot.

Cup may have been on their own out in Sonoma, but another national series did compete this weekend with the Camping World Truck Series turning 160 laps Friday night at Gateway Motorsports Park.

The underdogs brought some pace in the race with Chad Finley finishing sixth in his first series start since 2015. The ARCA talent debuted his family team in the Truck Series and ran no higher all night until the checkered flag flew.

Jesse Little is a common top-10 contender now, grabbing his fourth in five starts this year, while Austin Hill just missed the top 10 in 11th for Young’s Motorsports.

Kevin Donahue scored a career-best finish with the Mittler Brothers in 12th. The result was the team’s first finished race all season and their best non-plate finish since Eldora last summer.

Fun day today at @RaceSonoma on the @sufferfestbeer @alpenglowexped Chevy. Wish we had some more speed but the guys did a great job and we persevered. P28 pic.twitter.com/otHXnPlN1v

Just got home. Burnt the midnight oil driving back with @Matt_Noyce & @fpenas24. Proud of our effort last night. Felt we should have been running better than our p7 finish. Glad we’re not becoming complacent with top 10s. We want to do better. Thanks for support @rusticrubco

Wanted to say thank you to all my fans for the continued support! Last night we had a hell of a @ToyotaRacing @AisinGroup Tundra sad we didn’t get the results to prove it. We are still in bad shape as far as being able to race @ChicagolndSpdwy. Your continued support is amazing!

Feel bad for @Blaney I thought he was stuck in a gear or down a cylinder.. didn't know it was power steering when I went by and gave him the ??.. a friendly one. But now im like damn he ain't got no muscles left to give me one back?

Yeah, let’s have lots of pity cautions and wave-arounds so the bottom feeders can run with the leaders and then spin out at the end to screw up the final results! I am happy with any race where the best are in front and the back-markers are marking the back. The whole reason for this column is nothing more than this generation demanding “participation trophies” for anyone who can beg or buy a ride, no matter that they are moving chicanes on the track.

SmarterThanYo is a total choad. I had the #18 tatok removed from my Jimmie Johnson, so that maybe you would be kind enough to spit it out now?