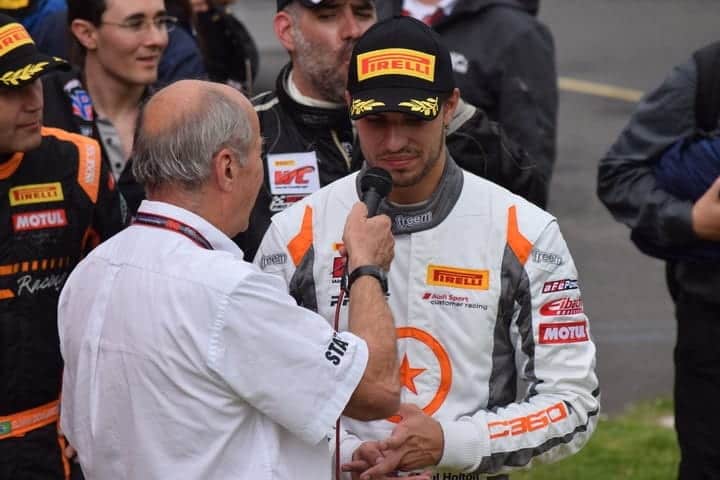 Paul Holton has risen up through the lower ranks of sports car racing over the past couple of years.  Just four years ago, he was racing in the IMSA Continental Tire SportsCar Challenge’s Street Tuner class in a Honda Civic.

Last year, Holton split time between a McLaren in the CTSC and an Audi RS3 LMS Club Sport in Pirelli World Challenge’s TC class.  In the detuned TCR car, he won four races and won the TC championship.

Today, Holton races in both the CTSC’s Grand Sport class and Pirelli World Challenge’s GTS SprintX class for Compass Racing in a McLaren 570S GT4.  He has also parlayed his success into a factory deal with McLaren, an accomplishment that will likely mean great things for his career.

Holton sat down with Frontstretch during the Pirelli World Challenge weekend at Lime Rock to talk about his IMSA and PWC seasons, his factory deal with McLaren and more.

Phil Allaway, Frontstretch: Through three races, you’re currently 13th in points along with teammate Matt Plumb with a best finish of seventh at Sebring. It seems like it’s been a bit of a struggle so far. How would you describe your year?

Paul Holton, No. 78 Compass Racing McLaren 570S GT4: A struggle is the right word at the moment. At Daytona, we were running fourth with two laps to go and had a suspension part fail. Nothing you can really do about that. We came from the back of the grid [at Daytona], so we had pace. Our strategy was on fire there.

At Sebring, same thing. We had a wheel nut break and that caused damage to our race car. We were really limping home at the end.  We had a lot more pace than we could show.

At Mid-Ohio, which we thought was going to be a bad track for us, we got taken out by Chase Briscoe in the Ford Mustang [GT4].

Allaway: Oh yes, that was rather controversial. You flipped off [Briscoe’s] crew afterward.

I was upset. The car wasn’t destroyed, but it had some suspension damage in the rear.

Probably shouldn’t have flipped them off.  I went and apologized to them afterward [since] I know all of those guys. A bit of a “red mist” moment for me. Don’t plan on doing it again, though.

Allaway: On the IMSA.com stream of the race, Jeremy West indicated that this would have been the kind of wreck in which you would be penalized for in NASCAR. Maybe prior to 2011, but absolutely not today.

Holton: Yeah, they stopped punishing people for that with the “boys, have at it” thing.

Where he broke, it didn’t matter where I was, he was going to hit me. I think he just [hit the brakes] too late. Obviously, he was trying to pass, but he wasn’t trying to hit me. Just a lack of experience from someone who probably shouldn’t have been in the car with that little experience.

I say that knowing that I’ve probably done the same thing in the past. It just wasn’t in $300,000 cars on a big pro weekend.

Allaway: For your Pirelli World Challenge effort, is this going to be a full-time GTS SprintX effort, or more of a part-time deal?

Holton:This is a full-time [effort]. We’re sorting out the co-driver for the rest of the season, but I’m supposed to do the rest.

Allaway: You and Ray Mason did the two races at COTA and had a couple of decent finishes (13th in race No. 1, fifth in Race No. 2).  Virginia International Raceway was another story.

Holton: We had an incident on-track that prevented us from finishing either race [at VIR].  Ray was racing through Turn 2 and got a little wide.  He then got off in the wet grass and hit the Armco. Not much that [he] could do about since he had someone inside of him, but it’s unfortunate.

Allaway: VIR is probably the one track that you don’t want to get in the grass. Tire curtains can only help you so much there.

Holton: I call it the car eater. It can take your car, chew it up and spit it out. [Mason] actually missed the tires and went straight into the Armco. I was kind of angry about that with the track because it was outside of a corner. There was a tire barrier, but then there was Armco, 50 meters of tires, then no more tire barrier again.  It was like “Oh, we have some extra [tires] here, but we don’t have enough for the rest.”

It was a little… inadequate. That could have saved our car had we hit tires. It might have been fixable, but it just wasn’t fixable that weekend.

Allaway: It doesn’t take much to require a frame machine to fix one of these cars.

Holton: Our car, being a carbon-fiber tub can take a big hit.  You just end up unbolting clips and putting a new clip on if you need to. We have our fair share of spare parts, but we didn’t have enough that day.

Allaway: This is your second year running as a teammate to Matt Plumb.  What is it like racing with Plumb?

Holton: This is actually the first time I’ve ever had the same teammate for two years in a row.  Matt was basically brought in last year to mentor me as a driver.  He continues to do that now.

He’s a lot of fun.  He’s a good friend, on and off the track. Lots of good wisdom imparted to me. It’s actually super awesome.  Everything you hear about Matt Plumb being a good guy is true. He’s been doing this for 20 years at least now. He’s been around a while, he’s seen a lot, he’s survived a lot in terms of ups and downs in racing.

Allaway: Back in March, you were named as a factory driver for McLaren. Obviously, you’re racing McLarens here in Pirelli World Challenge and in IMSA, but what does that ultimately entail for you?

Holton: For this year, that entails GT4 and GT3 development work. We have the new 720S GT3 coming out sometime this summer that we’re going to start testing.

That’s going to be a really intense testing schedule in front of a race schedule for the car next year.

Allaway: Is this testing going to be solely in Europe?

Allaway: Should be interesting.  The current car (the 650S GT3) appears to be geared too much towards pros.

Holton: You just have to drive [the 650S GT3] on edge. You gotta really drive it and drive it hard.

The way GT3 is going, if it’s not a full factory Pro car, it’s a Pro-Am car with a bronze driver. If your bronze driver is 10 percent off of what you can do, it doesn’t matter what you can do because you can never make up that deficit. So, you need to have the amateur drivers as close to the pros as possible.

Allaway: You’re racing the 570S GT4 in both IMSA and Pirelli World Challenge. Are there any rule changes between PWC GTS and CTSC Grand Sport, in addition to the tires?

Holton: Yes, we have a slightly different BoP (Balance of Performance) over here. We have slightly less weight, but we run roughly 20 millimeters higher ride height. The ride height is quite detrimental as compared to the weight that we have in IMSA.

I prefer to have the ride height lower with the extra weight, but this is how the car runs in Europe. It gives a little better tire degradation on the Pirellis.  IMSA’s really good with not messing with ride heights since it messes with suspension geometry.

I’m not sure if Pirelli World Challenge’s officials have the same understanding on how ride height affects suspension geometry. We’re not the only ones with ride height out to lunch from where it should be. The BMW M4 GT4 is up almost an inch, the Audi’s pretty high. Things like where the shock is and how it travels are massively different. You’re in a totally different zone from where it was homologated to be.

Allaway: Going forward, where do you see your career going from here? Pirelli World Challenge GT? McLaren paying the money to get into GT Daytona in IMSA? Something else?

Holton: I don’t necessarily just want to race in the U.S.  I want to race around the world. You look at the really good guys. They’re racing on a different continent every weekend. That’s what I want to do. Doesn’t matter what it’s in whether it’s GT4, GT3, TCR.

I want to go to Le Mans. First, I want to go in GTE-Pro and win that. Then, I want to go and win overall in a Prototype. I’d like to be at Le Mans in the next couple of years. I’m confident in myself and my ability to do it. It’s just a matter of finding a spot that will allow me to show that.

Allaway: Do you desire to race in any other discipline outside of sports car racing?

Holton: I’ve always wanted to do RallyCross. I’d like to do Formula E [as well]. Formula E is cool. I don’t have much formula car/single-seater experience. It’s only been testing; I’ve never raced. The fastest open-wheel car I’ve driven is a Pro Mazda. Not super-fast.

With Formula E being on street circuits on street tires, I enjoy street circuits a lot.  I’ve done well on them.  I won at Long Beach this year [in the GT4 Invitational]. If I could find an opportunity to go do Formula E, I’d jump on it very quickly, even to just do a rookie test.

The cars are cool, the whole concept is cool. The event is cool. It’s super awesome.

I feel like sports car racing, in general, is fun. You look at INDYCAR or Formula 1, and sometimes it just doesn’t look fun. Not the driving part, but the rest of it. There seems to be a lot of animosity amongst the groups.

That’s something that [Fernando] Alonso said as well.  He said, “Wow, this is actually a really cool environment. It is very different from what I’m used to.”

Allaway: What kind of goals do you have for the rest of the season?

Holton: I’d like to win some more races. That’s always the goal, isn’t it? I’m not sure if our championship hopes in either IMSA or Pirelli World Challenge are going to be extremely good now due to our results.

If we can get on the box a couple of more times and bag some more P1 finishes, I’d be pretty happy with that.

Nice interview. Seems like Formula E is gaining momentum all the time.