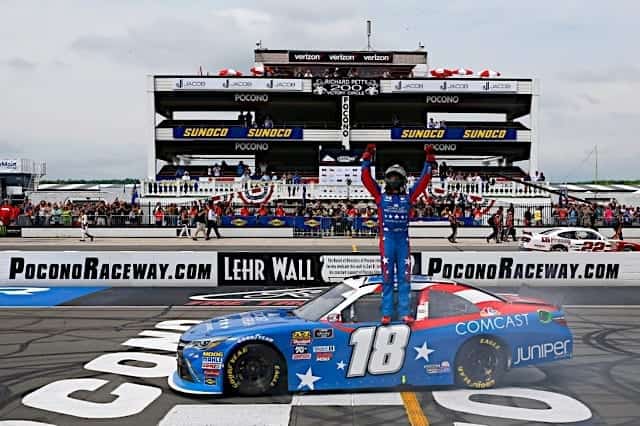 It’s no secret that despite the rules being more strict than ever, the Monster Energy NASCAR Cup Series regulars are still hogging most of the wins in the NASCAR XFINITY Series. This problem has led to an identity crisis in the series where names are supposed to be made.

If you include Ryan Preece, the NXS regulars have won six of the 14 races so far this season. Had the Dash 4 Cash not banned Cup drivers from four of the races, that number would likely be two. There are 11 more races until the MENCS drivers are banned for the rest of the season. Eight of those are companion events. I’ll give the NXS drivers the benefit of the doubt and say that one of them will win next weekend at Daytona International Speedway.

Therefore, by my estimate, an NXS regular will win 10 of the first 25 races. The season will end with the regulars having won just over 50 percent of the races, which is a really bad look for the series.

It’s obvious that changes need to be made. Some are calling for the total ban of Cup drivers from the lower division, even though from a sponsorship and attendance standpoint, that’s not a good idea. Meanwhile, it’s looking like NASCAR is going to leave the current restrictions in place for next year, which means that we will have another Cup-dominated year in XFINITY in 2019.

There needs to be a middle ground between these two options. Two ideas are to create more NXS standalone events or to make a rule that MENCS drivers can only compete if they drive for a different team than their Cup team. I love both of those ideas, but the reality is that NASCAR isn’t going to any new tracks anytime soon, and the second idea would be too hard to enforce. For example, JR Motorsports isn’t technically Hendrick Motorsports, so could Jimmie Johnson drive as much as he wants in a JRM car?

I struggled to find the right answer to this equation until I saw all of the hype being generated from the K&N Pro Series West race at Sonoma Raceway. That race had a handful of Cup drivers in it (as it often does), and it provided an excellent platform for Will Rodgers and the K&N regulars to show off their skills. This race was interesting because it was one of only two times all season that these drivers will take on the Cup stars. So a K&N driver is virtually guaranteed to win 12 of the 14 races (86 percent) and compete against Cup stars in the other two. (NOTE: NASCAR doesn’t actually ban Cup drivers from K&N races, but Cup drivers don’t typically show up to the other races on the schedule.)

The fact is that the drivers in the lower levels want to race against the Cup drivers to provide a measuring stick for their talent. It’s just that the Cup drivers should be in a minority of the races, not the majority. NASCAR has tried to get rid of this problem but has gone about it the wrong way. A seven-race limit per experienced driver leaves too much of a gray area; a team can just enlist more Cup drivers to a car to fill out the schedule, a la Team Penske’s No. 22 or Joe Gibbs Racing’s No. 18.

Instead of setting a limit on how many NXS races a Cup driver can run, NASCAR should be making a ruling on how many they can’t run. With the current rules, Cup drivers are allowed in 21 of the 33 races — that’s 64 percent of the season.

Let’s flip those numbers so that 64 percent of the races are XFINITY drivers only. This way, Cup drivers will still bring in sponsorship and fans and steal candy from babies for 12 races, and the NXS drivers will get to win and make a name for themselves in 21 races — almost the length of the Camping World Truck Series season.

This change would make it more of a special event when the Cup drivers do race in XFINITY. Also, if a team splits a car between a Cup driver and an NXS driver, the NXS driver would get a decent amount of races to gain experience instead of a handful of random spot starts.

In this plan, three of those 12 races Cup drivers are allowed in would be at the non-companion races at Iowa Speedway (only in one of the two races at the track), Mid-Ohio Sports Car Course and Road America. Non-companion races struggle to get a crowd, so they could use the boost from the Cup drivers. This would give fans in those areas a chance to see their favorite drivers race in person.

Under these rules, Kyle Busch could race in 12 XFINITY races as opposed to the seven now. But if JGR did that, then it would have one less seat available for Denny Hamlin, Erik Jones and Daniel Suarez in those 12 races.

The only exception to my proposed rules would be Cup rookies, who should be allowed to race in all NXS races except for the Dash 4 Cash races and the playoffs so they could gain more experience and make more of a name for themselves at the top level.

There’s probably minor flaws in my plan, but for the most part it would give the XFINITY Series back its identity and make all of the races more entertaining, including the handful with Cup drivers entered. The XFINITY Series definitely needs for something to change, and this is probably the most realistic option for the time being.

“Some are calling for the total ban of Cup drivers from the lower division, even though from a sponsorship and attendance standpoint, that’s not a good idea.”

When will you and everybody else in the NASCAR media get it through your heads that there is NOT a correlation between Cup guys being in the race and attendance anymore? Have you noticed the attendance at the Xfinity races this year with Cup guys in the field? Putrid. Just as bad as the standalone races. This isn’t the 80’s and 90’s, when a Cup guy or two would jet out to a BGN race in Volusia or Myrtle Beach and get an extra 2,000 butts in the seats. Those days are gone.

90% of the drivers in NASCAR who had any sort of crowd draw have retired (Edwards, Stewart, Gordon, Junior, Danica etc etc).

With that all said, I get you’re on the side of those of us who are sick of seeing them double dip, but don’t buy into NASCAR’s reasoning. Just like most everything else they state publicly…it’s B***SHIT.