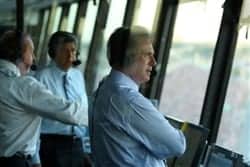 This weekend at the Chicagoland Speedway marks the first for newly retired NASCAR superstar Dale Earnhardt Jr. in the broadcast booth as he makes his debut for NBC Sports. Even though he has been in the booth at times before, such as in 2016 when he was sidelined due to a concussion suffered mid-season, this will be the first time he is in the booth as a full-time job.

Earnhardt joins a large group of drivers who have traded in their helmet for a microphone in the booth, and several of them have had a successful career after their driving days were over. Going from driving the car to calling the race is a tough transition, and former drivers have documented that to be true. It’s a completely different world, and the 15-time most popular driver has publicly said he’s excited for the challenge he may face.

Let’s take a look at just some of the former drivers who went on to transition to a broadcasting career, both then and now.

Better known as BP to many, Parsons is the 1973 Monster Energy NASCAR Cup Series champion and had a very successful driving career, with 21 wins. After his retirement in 1988, he joined the broadcast booth for ESPN. Parsons stayed with ESPN up until its final broadcast at the time in 2000, but he was quickly picked up by NBC/TNT to join its coverage for the 2001 season. With one of the most iconic voices in the booth of all time, he went on to have an extremely successful broadcasting career as well. Unfortunately, Parsons’ career was cut short in the booth after he passed away in 2007 at the age of 65 due to complications from lung cancer.

DW hung up the helmet at the end of the 2000 season after a career that saw three championships and 84 wins in the Cup Series. Even throughout his career, he appeared in the broadcast booth from time to time as a guest analyst for different series.

FOX Sports hired Waltrip to be a part of its coverage starting in 2001 to be alongside Mike Joy and former crew chief Larry McReynolds. Waltrip is still a part of the FOX team 17 years later and has plans to be back in the booth for the network in 2019 to make it 19 consecutive seasons with the network.

Ned Jarrett had a driving career that did not last as long as some of the other drivers who joined the broadcast booth after their driving days were complete. Jarrett only raced for 14 seasons but had 50 career wins and one championship in 1961. After his days of racing were over in 1966, it was not until 1978 when he was hired by MRN Radio to join its team in the booth. His first TV appearance came in 1979 as a pit reporter for CBS and in 1984 became a color analyst until the 2000 season. Jarrett has not done much broadcasting since then, but he has made an appearance on the NBC broadcast during the Darlington Speedway throwback race the last three seasons.

Kyle Petty hung up the helmet at the end of the 2008 season to begin his broadcasting career. After eight wins during his driving days, Petty started doing broadcasts for NBC/TNT during the 2006 season when he subbed for Parsons, who was battling lung cancer at the time, during several XFINITY Series races since he was running the Cup Series full-time that year.

In 2007, he was a part of the six-race TNT Summer Series broadcast alongside Wally Dallenbach Jr. (a fellow former driver) and Bill Weber, including at Sonoma Raceway when he was the in-race reporter. Petty started doing TV full-time after 2008, and he remained with TNT until 2014 (also making appearances on Fox Sports’ RaceDay and RaceHub), when the network stopped covering NASCAR. Quickly, Petty was hired by the new NASCAR on NBC team to be a part of its broadcast starting in 2015. He currently appears on NBC’s NASCAR America and is a part of the pre-race show for both the XFINTIY and Cup series every weekend.

Dale Jarrett followed in the footsteps of his father Ned when it came to broadcasting after their respective driving careers. Jarrett won a total of 32 races and one championship during his Hall-of-Fame career behind the wheel.

After the 2008 season, Jarrett retired from driving. The previous season, he was hired to be a member of ESPN’s broadcast team for both the Cup and XFINITY series. Jarrett joined Dr. Jerry Punch and Andy Petree in the booth full-time in 2008 and continued until ESPN’s contract was up with NASCAR in 2014. Much like Petty, Jarrett was quickly snagged by NBC to be a part of the broadcast team, alongside Petty and Krista Voda, on the pre-race show. Today, he occasionally appears in the booth during XFINITY races and also appears on NASCAR America during the week.

Hey Brandon, do some fact checking. Ned Jarrett had TWO championships, 1961 and 1965, not one.

Benny Parsons never raced in the Monster Energy NASCAR Cup Series. Call it what it was at the time, or just call it the “Cup Series.” All the network guys do that too, and it bugs me. It’s not a crime to say Winston Cup, or Busch, or Craftsman Truck Series.