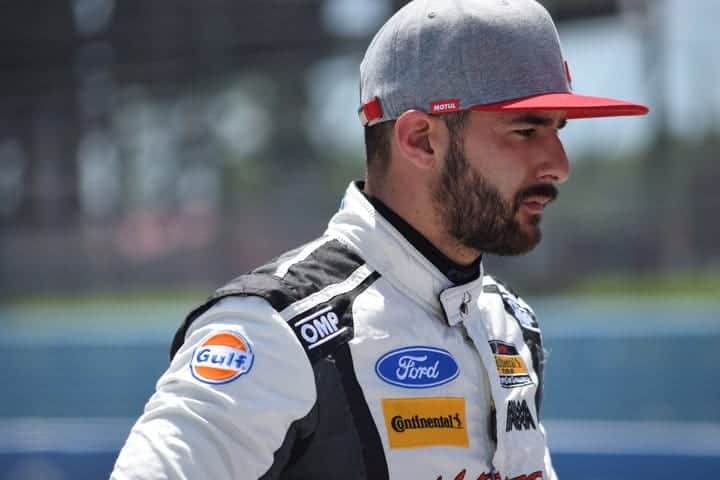 Andrew Wojteczko Autosport’s Brett Sandberg claimed the pole Friday afternoon (June 29) in his Ford Mustang GT4 for Saturday’s Continental Tire SportsCar Challenge Continental Tire 240 at the Glen.  Sandberg’s lap of 105.106 mph gives both Sandberg and the team their first-ever pole in the series.

“The car was amazing,” Sandberg told Frontstretch in the garage.  “It’s a testament to [the crew’s] hard work, the testing and the preparation that goes into this all.  It was definitely difficult to put it all together in a lap.  It’s always trying conditions when there’s a caution in qualifying.  I’m really happy and super-excited for [Saturday’s] race.”

Sandberg had to “put it together in a lap” because the Grand Sport qualifying session had a red flag early on due to a crash for TeamTGM’s Ted Giovanis exiting the Inner Loop.  Giovanis’ No. 4 Mercedes AMG-GT4 was heavily damaged in the right rear corner, but Giovanis is ok.  The No. 4 is likely done for the weekend as the team simply covered it up as soon as it returned to the garage.

At the time the red flag was displayed, only McCumbee had posted an official time.  The green flag came back out with only enough time for drivers to complete no more than two timed laps at speed.

Sandberg was one-sixth of a second faster than Multimatic Motorsports’ Chad McCumbee in another Mustang.  Ramsey Racing’s Alexandre Premat, who was quickest in Practice No. 2 Friday morning, will star third, followed by Winward Racing/HTP Motorsport’s Indy Dontje.  VOLT Racing’s Trent Hindman will start fifth in his Mustang.

TCR and Street Tuner teams did not have a red flag during their session, allowing them the full 15 minutes of action.  In TCR, it was Compass Racing’s Pierre Kleinubing who claimed the pole with a lap of 103.704 mph, good enough for 16th overall.

The time, which is the fastest TCR lap of the entire weekend, was only one-hundredth of a second faster than teammate Britt Casey Jr.  Kuno Wittmer qualified the third Compass Racing Audi in third.  eEuroparts.com Racing’s Kenton Koch will start fourth in class.

In Street Tuner, BimmerWorld Racing’s Devin Jones will start on the class pole after recording a lap at 96.467 mph.  That lap was one and three-quarters seconds faster than MINI JCW Team’s No. 52 for Colin Mullan.  Bodymotion Racing’s Jason Rabe will start third.

The Continental Tire 240 at the Glen is scheduled to go green at 1:55 p.m. EDT Saturday afternoon.  The race will be streamed live at both IMSA.com and FansChoice.tv.