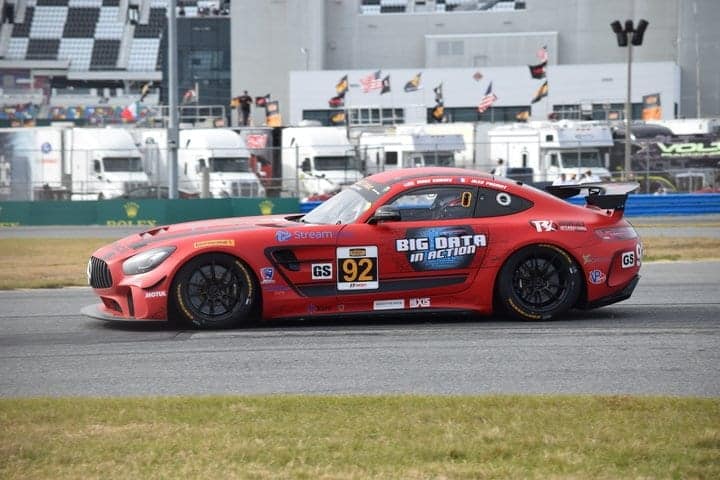 Through two IMSA Continental Tire SportsCar Challenge practice sessions at Watkins Glen International, Ramsey Racing’s Alexandre Premat is fastest with a lap of 105.106 mph.  Neither session was truly indicative of race conditions, though.

Thursday’s first practice session was held in changeable conditions.  The session started out wet before drying out.  Even once it dried, skies were still overcast.  Right at the very end of the session, Murillo Racing’s Eric Foss posted a lap at 103.330 mph to lead overall.

Foss’ lap was nearly a full second faster than the Ford Mustang GT4 of Multimatic Motorsports’ Scott Maxwell.  Andy Lally was tapped at the 11th hour to drive KohR Motorsports’ No. 59 Ford in place of Joey Atterbury.  Despite very little experience in the Mustang GT4, Lally was third fastest at his favorite track in the whole wide world.  Winward Racing/HTP Motorsport’s Damien Faulkner was fourth quickest in his Porsche, while the McLaren of Compass Racing’s Matt Plumb was fifth.

In TCR, Rumcastle LLC’s Bryan Ortiz was fastest with a lap at 101.015 mph, good enough for 10th overall.  That lap was only five-thousandths of a second quicker than Pirelli World Challenge veteran Tom O’Gorman in the new eEuroparts.com Racing No. 12 Audi.  Compass Racing’s Kuno Wittmer was third, followed by Pierre Kleinubing.

Street Tuner was led by MINI JCW Team’s Mat Pombo with a lap of 95.491 mph.  The lap was more than five seconds than Bodymotion Racing’s Jason Rabe, who was the only other driver in the class to set a time.

The weather conditions did keep a number of teams off the track.  Only 23 of the 39 cars entered officially posted times.

The second session was held bright and early starting at 8 a.m. on Friday.  Given the fact that the race will go green at 1:55 p.m. Friday, these conditions were much cooler than what teams will see in the race.  Premat turned his quick lap early in the session.  It was nearly two full seconds faster than Foss’ time on Thursday.

Premat’s time was three-sevenths of a second faster than CarBahn Motorsports’ Tyler McQuarrie in the only Audi R8 LMS GT4 in the field.  Right at the end of the session, Winward Racing/HTP Motorsport’s Indy Dontje put his Mercedes third on the chart, followed by AWA’s Brett Sandberg.  Multimatic Motorsports’ Chad McCumbee was fifth fastest.  Points leaders Dillon Machavern and Spencer Pumpelly were 10th quickest.

In TCR, eEuroparts.com Racing’s Kenton Koch was fastest with a lap at 102.686 mph.  The lap, fast enough for 22nd overall, was within two seconds of last year’s overall pole.  Koch’s lap was one-tenth of a second faster than Compass Racing’s Britt Casey Jr.  Teammate Wittmer was third, followed by Ortiz.

In Street Tuner, BimmerWorld Racing’s Devin Jones was fastest with a lap at 96.164 mph.  That lap was three-tenths of a second faster than Pombo in the No. 73 MINI.  Derek Jones in the No. 37 MINI was third.

CTSC teams have a brief 15-minute practice session at 12:25 p.m. Friday that directly precedes qualifying.  Qualifying is set for 12:50 p.m. and will not be televised.