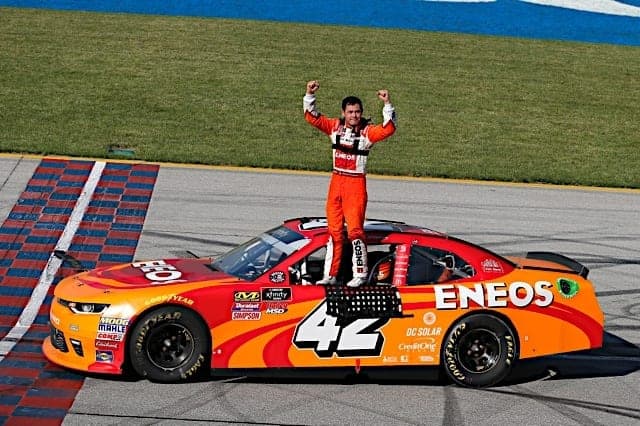 Kyle Larson won the pole for the Overton’s 300 at Chicagoland Speedway, but when the team had to change one of the tires after qualifying, he was forced to start from the rear of the field. On an extremely hot day, Larson literally scorched the field. He won the race by well over eight seconds over second-place Kevin Harvick.

Cole Custer, who also had to start from the rear of the field after a tire change, finished the race in third while the Daniel-Duo of Suarez and Hemric rounded out the top five.

As noted above, Larson didn’t start the race from the pole. Tyler Reddick would take over that position and would win the first stage, as Larson and Custer both seared through the field.

A bad pit stop would cost Reddick the lead and would ultimately begin his downhill day. Reddick’s bad day would see a silver lining when his crew gained him two positions but when NASCAR Race Control came over the radio, it was the worst possible news for the No. 9 team. He was too fast on pit road meaning he’d have to go to the rear and work his way back.

Meanwhile, Larson and Harvick would battle for the lead and the stage victory with Larson earning the victory.

On lap 99, Jeb Burton and Ryan Reed would make contact that would send Burton sideways and Reed into the wall. As the field approached, Reddick could get stopped and he rear-ended the No. 16 destroying the front of his No. 9 TAKL Chevrolet Camaro.

Harvick would lead the field back to green after the caution but would eventually get passed by Christopher Bell. A crush panel on the apron of turn four would result in the final caution of the afternoon which would give teams their second-to-final pit stop. Chase Briscoe stayed out to take the lead but as the green was displayed, Briscoe would move out of the way surrendering the lead to Harvick.

Harvick would be one of the first drivers to pit surrendering the lead to Larson. When the No. 42 came down pit road, Brandon Jones took the lead but he still had to pit. Once he did pit, the lead went back to Larson and he just began clicking off laps, ultimately earning the victory.

UNOFFICIAL Results for the Overton’s 300 at Chicagoland