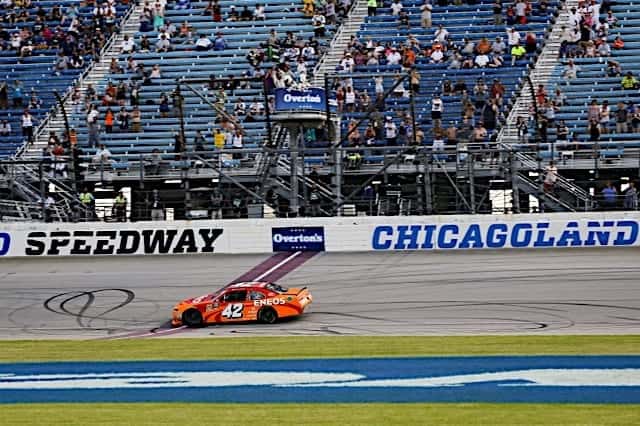 On Saturday morning, Kyle Larson won the pole for the Overton’s 300 at Chicagoland Speedway. However, he had to start from the rear after the No. 42 team saw a puncture in the right front tire.

It didn’t take long for Larson to get to the front. With a caution-free first stage, the No. 42 jumped up to sixth, earning five stage points. By the end of stage two, he jumped out to a four-second lead, taking the playoff point for the owner’s title.

During the final stage, Larson dominated for much of the last 100 laps, though it took about 20 laps for his car to come in. Once the tires wore off, the No. 42 found the high line, and took off from the field.

“There’s always hope with this team,” Larson said on the finish line after the victory. “There have been a lot of times where I feel like I’m not good in practice and then the guys make it a lot better for the race… Just can’t say enough about this racecar. We were really bad yesterday, so it feels good to get a win.”

Larson led a race-high 80 laps. It’s his second win in three races this season, but in all three races the California driver has led the most laps. Currently, he ranks second in most laps led this season (283), just behind Justin Allgaier.

Kevin Harvick led 38 laps, though finishing second. Cole Custer came from the back as well, driving up to third, with Daniel Suarez and Daniel Hemric rounding out the top five.

High, wide and handsome. Man, racing inches from the wall looks like a lot of fun, but let’s leave it to the professionals.

Kyle Larson is notoriously known for making speed up high, though it’s cost him a few race victories in his career — a few races at Homestead come to mind. Dale Jarrett gave him high praise after winning on Saturday, claiming Larson is the best driver he’s ever seen get around tracks next to the wall.

During the first stage Tyler Reddick used it to his advantage getting the stage victory, running higher than Larson, and that’s awfully hard to do. Many drivers stepped over the edge and made contact with the wall, but with the new composite bodies this season, it’s not the end-all-be-all if you get into the wall.

The outside line works at some of these tracks because of tire wear. Atlanta, Fontana, Chicago and Homestead come to mind where the top lane is the preferred groove, especially the longer the run goes. Running well at Chicago has been a good indicator of who will run well at Homestead because the track surfaces are so similar.

Mama Mia, it was hot on Saturday in Chicago.

That was the story of the race, and drivers were exhausted upon climbing out of their cars after 300 miles. With the heat and lack of cautions, drivers weren’t able to cool down much by putting ice packs inside their firesuits, or grab a drink of water.

At one point, NBC caught Kevin Harvick dumping a bottle of water on his face inside his helmet during a yellow flag. Meanwhile, the thermometer in Justin Allgaier’s car reached 150 and then said “Hi.” Per the Google, see less “hi” means high, as in the temperature is higher than the digital thermometer and probe is capable of measuring. That means it’s damn hot.

As the race began to wind down, it became a bigger and bigger issue. Chase Elliott, driving for GMS Racing, reported to his crew that he needed medical attention after the event. Following the conclusion, the 22-year-old was seen sitting up against the No. 23 machine before hopping in an ambulance and going to the infield care center.

.@ChaseElliott, like many, were exhausted after a grueling @NASCAR_Xfinity Series race.

Elliott was transported to the infield care center after experiencing temperatures of more than 150 degrees inside the car. pic.twitter.com/5H3X15w7Jw

Some drivers didn’t care about the heat.

“Just another day. Feels like another day in North Carolina. No big deal,” Paul Menard said after finishing eighth.

However, other drivers were spent because it’s something they had never seen before with a heat index of nearly 110 degrees.

“It is definitely the most physical race I have ever been a part of,” Chase Briscoe said. “I was supposed to go run two more races tonight over at the sprint car track but I don’t think I am going to do that. It sounded like a great idea at the time before I knew it was going to be 110-degrees.”

.@DanielHemric weighed himself for @NASCARonNBC before & after the race today & just learned he lost almost nine pounds during today’s event. It was definitely a hot one out there! pic.twitter.com/TeUCGRxg4m

This was the first of 15 consecutive weeks of racing for the XFINITY Series covering the entire summer. Chicago will likely be the hottest of the season.

Jeb Burton‘s 2018 XFINITY Series came to a close halfway through the 300-mile event on Saturday when he was caught up in a three-car incident, including Ryan Reed and stage one winner Tyler Reddick,

The No. 3 car dove into Turn 3 running the middle lane, though there were two cars underneath him. Burton pinched Reed down into Jeremy Clements, which saw the No. 16 car turn the No. 3. Reddick, who was rim-riding around the fence piled into the rear of Reed’s Ford.

Reddick and Burton were unable to continue, finishing 33rd and 34th. Reed made six laps before pulling the No. 16 into the garage and he finished 32nd.

“I thought the [No.] 51 was going to let the [No.] 16 down, and it looks like I came down on the 16 a little bit,” Burton said. “He probably could have lifted when he saw me coming down. We were all racing hard… I don’t get many opportunities, so I hate that we tore up a racecar.”

Rough day! Hated I torn up a car just came down and we ran out of room. Thank you @estesexpress @StateIndustries for all of the support.

It was a disappointing end of the day for Reddick, who dominated the opening stage and earned a playoff point. When he brought the No. 9 to pit road, the crew had a bad pit stop, losing 10 positions. On the resuming restart, he had his car heading toward the inside wall, but saved it on the backstretch.

In the 45-lap stage, Reddick rebounded to finish seventh, earning an additional four stage points. However, he was caught speeding on pit road, which sent him to the back of the pack, which is why he was caught up in the incident.

“Just got caught up in a mess that we didn’t need to be in and that’s on me,” Reddick said. “We’ve been aggressive on pit road and its gained us spots all year long. These last couple races I’ve been pushing it a little to far it seems, and it puts us in bad spots.”

Huge thanks to @takl_app for coming on board this weekend. I’m excited to have them back on the car in Daytona and Iowa. Glad to have some speed again as well. I’ve got to clean up some things on my end and hopefully If we do that we can find victory lane again. pic.twitter.com/OwMQMRswcq

Underdog Performance of the Race:

Chase Briscoe is running a part-time schedule this season for Stewart-Haas Racing and Roush Fenway Racing. Prior to Chicago, it was a challenging start to the season.

However, he drove the No. 60 team to its second (and only) consecutive top-10 finish, as Ty Majeski finished seventh at Iowa Speedway two weeks ago. He seemed like a more mature driver on Saturday, even playing a strategy of his own.

Briscoe continued to move up the leaderboard throughout the race. At the conclusion of stage one, the No. 60 car was 16th. He fell to 17th at the end of the second stage, but stage three is where he shined.

His crew chief Mike Kelley left him out after a caution on lap 113. The No. 60 car was the only driver not to pit, and had old tires. But it was all a part of their strategy, as he moved out of the way on the restart, though remaining on the lead lap.

“The yellow came out and everybody pitted and we decided to stay out because we knew we weren’t going to win the race as it was so we felt like we needed to do something,” Briscoe said of the strategy call. “We were pretty good with 15 lap older tires and held our own and at the end it felt like we were a top-three car.

“We just didn’t have track position. I am proud of the guys. It was a hot weekend and to continue to work this hard and fight this hard all weekend long shows how hard these guys work.”

Briscoe ended the race in ninth, his first top 10 of his young XFINITY Series career. It’s his fourth top-15 finish in eight starts this season.

Kyle Larson cruised to the victory, picking up his second win of the year. Not far behind, at least on the short runs, was Kevin Harvick, who finished the aforementioned second.

2016 series champion Daniel Suarez finished fourth, while Paul Menard (eighth) and Chase Elliott (10th), were the only other Cup drivers in the top 10.

“Had to try and play some strategy at the end and stayed out and actually thought it was going to work for a little while and get up there and just missed by about a spot there.” – Brandon Jones

“It is definitely the most physical race I have ever been a part of. I was supposed to go run two more races tonight over at the sprint car track but I don’t think I am going to do that.” – Chase Briscoe

“At the end I don’t think I was struggling anywhere, just made a mistake on pit road.” – Christopher Bell

Overall, Kyle Larson put it to the competition today, and has in every race he’s been in this season. Meanwhile, Cole Custer was very impressive, recording his fifth consecutive top-five finish and has taken over the points lead.

Rookie driver Chase Briscoe was also very impressive and played a different strategy from the rest of the field. He notched his first career top-10 finish.

The story of the day was the heat. Saturday’s race was one of the warmest races in recent memory, and drivers were worn out after the race. The bad news? This was the first race of summer for the XFINITY Series this year.

The series makes its return to Daytona next weekend for the second time this season. In the season-opening event, Tyler Reddick edged out Elliott Sadler by .004 seconds, the closest finish in NASCAR history. William Byron is the defending race winner.

In short, another Xfinity race dominated by cup drivers means another crappy, unwatchable piece of crap. And another track meant for yawning. I tried to watch it, but you knew what the outcome would be from the get go.