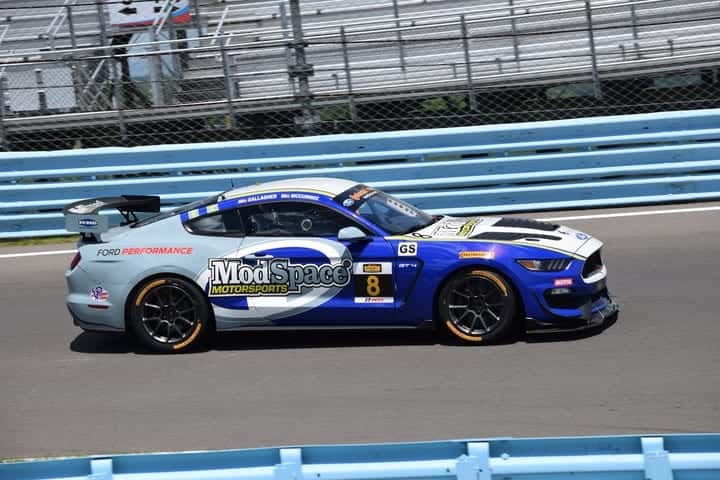 Multimatic Motorsports’ Chad McCumbee and Patrick Gallagher dominated the entire second half of Saturday’s Continental Tire 240 at the Glen to claim their first career overall victories in the Continental Tire SportsCar Challenge.  It is the third win in a row for the Ford Mustang GT4.

“This is the most competitive sports car series I’ve ever been a part of,” McCumbee said after the race.  “The intensity and talent throughout this field is second-to-none, and to win like we did today, it was really convincing.  It’s great for ModSpace, Multimatic, everybody on our side and the Good Lord above.  This is big.  I feel like it’s probably one of the biggest moments of my road course career, coming over from stock cars.”

“Chad [McCumbee] did a great job all day and the guys at Multimatic and ModSpace gave us a good rig, so hats off to them and all the guys in the heat changing our tires and stuff,” Gallagher added.  “We were knocking on the door of a win at Mid-Ohio and I’m glad we finally got one here. I’d of liked to win at Mid-Ohio being a Buckeye, but I’ll take this one too.”

Ultimately, the race itself started off with a bang.  Andrew Wojteczko Autosport’s Brett Sandberg led the field to green with McCumbee right behind.  Then, heck broke loose in the Esses.

Unseen in the video, Murillo Racing’s Tim Probert had contact with Classic BMW’s Toby Grahovec, pitching Grahovec into the wall.  A big check up occurred.  Automatic Racing’s Aurora Straus was hit from behind and spun into the wall by Compass Racing’s Pierre Kleinubing.  The result of all that was a mess that brought out the full course caution.  Straus and Grahovec’s cars were out on the spot, while others made repairs and continued multiple laps back.

After the second full course caution, Gallagher was able to get past Sandberg’s teammate Martin Barkey to take the overall lead.  Once out front, the No. 8 team pulled away from the pack.  For the AWA No. 80, any chance they had of contending for the win ended when Barkey was spun in turn 11 by Automatic Racing’s Eric Lux.

As you can see, the No. 80 Ford suffered rear-end damage in the crash and was forced to make an unscheduled stop for repairs.  Barkey and Sandberg would ultimately finish two laps down in 20th overall (15th in Grand Sport).

McCumbee was able to stretch their lead up to 20 seconds before a late yellow for a disabled Mercedes brought everyone back up to the ModSpace Ford.  Once the green came back out with a little more than 30 minutes remaining, McCumbee was able to open up the gap on the field and win easily.

McCumbee and Gallagher’s margin of victory was 7.938 seconds over BimmerWorld Racing’s James Clay and Tyler Cooke.  KohR Motorsports’ No. 60 Mustang of Kyle Marcelli and Nate Stacy were third, followed by CarBahn Motorsports’ Tyler McQuarrie and Jeff Westphal.  TeamTGM’s Hugh Plumb and Owen Trinkler finished fifth.  Point leaders Dillon Machavern and Spencer Pumpelly finished seventh.  Prior to the race, Pumpelly told Frontstretch that their Porsche Cayman GT4 Clubsport MR was not well-suited to Watkins Glen and were hoping to score a top 10 at best.

In TCR, the big crash on the first lap eliminated pole sitter Kleinubing’s No. 75 Audi from contention.  They did continue after making significant repairs, but ended up 30 laps down at the finish.

On the final restart, Compass Racing’s Tom Long was able to get the lead away from O’Gorman and held on over the final 16 laps to take his and teammate Britt Casey Jr.‘s third win of the year.   Afterwards, Long was quite excited.

“I tell ya, it’s our team.  Compass Racing did an incredible job today,” Long said after the race.  “Our Audi TCR car was hooked up;  can’t be here with[out] Trumpf, so gotta thank them.  And [Casey], man, he drove an awesome stint.  I think he led overall for a couple of laps, which is just mind boggling.  So can’t say enough about how hooked up our car was today.”

In Street Tuner, BimmerWorld Racing’s Nick Galante and Devin Jones dominated the early portions of the race in their BMW.  Unfortunately, the final cautions came at an inopportune time for the VeriStor-sponsored team.

After the final stops, MINI JCW Team’s Mark Pombo ended up with the lead in his No. 52 MINI.  From there, Pombo was able to hold to take the class victory.  For teammate Colin Mullan, it is his first career victory.