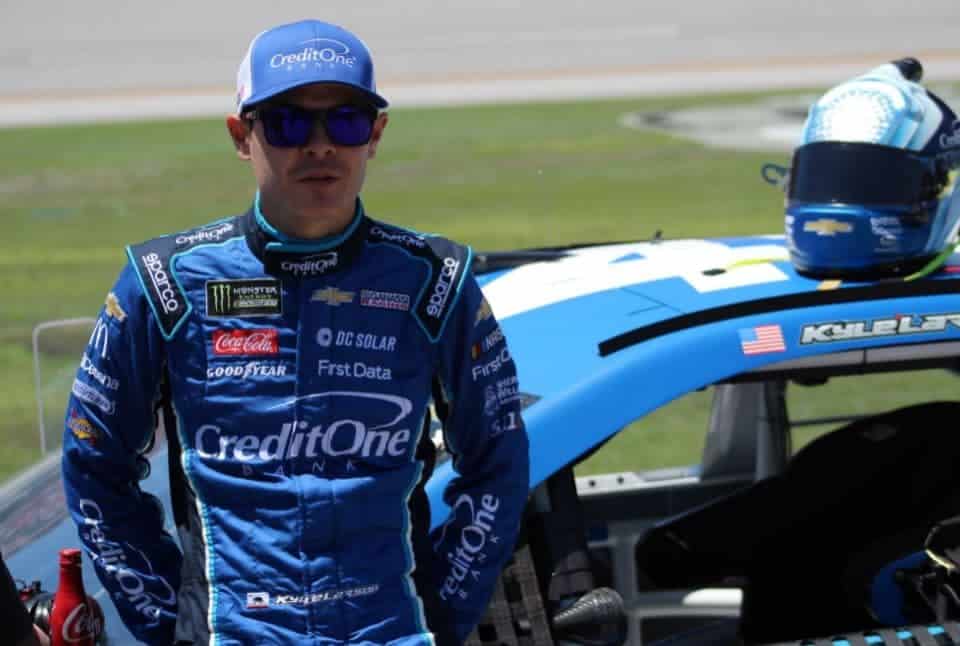 Did You Notice? … how gracefully Kyle Larson accepted defeat? From erasing a more than three-second deficit to coming within striking distance, only to smack the wall, lose momentum and get another shot at Kyle Busch with some help from lap traffic, the driver of the No. 42 Chevrolet did everything he could to score his first 2018 win. But despite a last-lap slide job that was returned with a bump and spin, Larson came up short, although he was able to right the car and take the checkered flag second.

In what should have been a disappointing finish, Larson emerged from the car with a smile on his face.

“Oh man, I’m not upset. I wasn’t really trying to make it in front of him,” Larson said. “I figured if I ran in there to try and clear him, I would have had to slow down so much to not hit the wall that he would have just turned underneath me and it wouldn’t even have been a battle to the win.

“I didn’t initially go in there planning to run into the side of him. When I ran in there and figured I wasn’t going to have enough momentum to clear him and get going, I kind of made the plan to try and squeeze into him, to bog him down. It worked. Just he was able to get back to my back bumper into (Turn) 3.

But despite Larson’s insistence to the contrary, many fans have expressed their displeasure with Busch, claiming it was a “dirty” move that gave him his fifth win of the season. I question whether those attitudes would be the same if the roles were reversed, or better still if it were Martin Truex Jr. and Kevin Harvick who engaged in the high-contact, last-lap battle. My guess is the answer is a resounding no.

Simply put, if Larson isn’t upset about the finish, why should anyone else be?

Did You Notice? … teams are still struggling to get through inspection? This weekend’s visit to Daytona International Speedway marks the halfway point of the season, yet the inspection process continues to get almost as many headlines as the racing itself.

With the abbreviated two-day schedule at Chicagoland, NASCAR streamlined its inspection process, opting to skip the thorough pre-qualifying inspection. The sanctioning body still evaluated safety aspects, fuel cells, engines and splitters on the cars before releasing them on track, but the full inspection came after qualifying was completed.

Yet once again, four teams failed to make it through on their first attempt. Chris Buescher, Denny Hamlin, Jimmie Johnson and Truex each had their qualifying times disallowed and were forced to start at the back.

The problem is, disallowing qualifying times does nothing more than put drivers at the back of the field in a 400-mile (or 500-mile) race. That’s more than enough time for these top-notch crew chiefs to hatch a plan, whether via pit road strategy or outright speed, to get their drivers to the front of the field by the time the checkered flag flies.

In fact, two of the four drivers whose qualifying times were disallowed still finished in the top 10. Truex ended up fourth, while Hamlin, who spun early in stage three, posted a seventh-place result. Johnson missed the top 10 by only a few positions in 14th, while Buescher didn’t fare as well with a 22nd-place finish.

Given how close the competition is on the track, it’s understandable that crew chiefs will push the envelope, attempting to gain whatever edge they can, no matter how minimal, but when it becomes a regular thing for cars to fail inspection, the sanctioning body needs to put its foot down and start parking teams that can’t pass. Until then, the envelope will continue to be pushed and the problem will continue.

Did You Notice? … how hard the tail end of the field raced Kyle Busch as the laps wound down? After Larson hit the wall and lost a half-second to Busch inside five laps to go, it appeared the driver of the No. 18 Toyota would just cruise to the victory. But instead, a trio of drivers on the tail end of the lead lap put up a fight that ultimately allowed Larson to close, giving him one more shot at the victory.

“Those lapped cars just got in our way and slowed us down so much that we just had no momentum,” Busch said after the race. “Finally I got through a couple of them.”

Of course, as soon as they put up any type of fight, Twitter exploded with people questioning why they were racing so hard. I’m a firm believer that every driver should race their tails off every single lap of the race. If they’re attempting to remain on the lead lap, even as the battle for the lead approaches, they have every right to push as hard as possible. Once they’re no longer on the lead lap, though, that’s a different story.

Sure, these drivers were about to go a lap down and clearly didn’t have the speed to hold off a hard-charging Busch, but for them to just pull over would be a disservice to their teams, who worked their tails off at the shop and on race day. Besides, who wants to watch a race where only a handful of drivers give it everything they’ve got?

Kyle Busch is always magnanimous in victory and his cry baby gesture typifies him when he loses
It appears that the move by Larson was not intended to cause contact but the retaliation by Busch was not bump and run but dump and run. Larson owes him one and I hope he remembers it at the right time. he is probably the only driver in the cup series who matches KB in skill and he needs to show more willingness to show toughness when the outcome is on the line

Agree with you but #42 is one of the rare ones in NASCAR, a true race car driver who want’s to win by any way possible .As long as he can do it CLEAN !He is a driver that kids should want to be like!

I’d say Dillon at Daytona was a dump and run too.

Tom B
Reply to  Al Torney

Kyle Larson is Class while Kyle Busch is Brass, obnoxious and immature.

Larson initiated the last lap contact and rightfully stated that he had it coming when Busch bumped him. But race fans on FS are so lacking in class and full of hate that if the events of the last lap had been reversed, Larson would have been applauded for his aggression in the pursuit of victory. I wonder if it even occurs to you that you are a bunch of whining hypocrites! Salb and Mike S. are typical of today’s sports crybabies.

Ah, if only one could realistically expect the same sportsmanship had the roles been reversed…